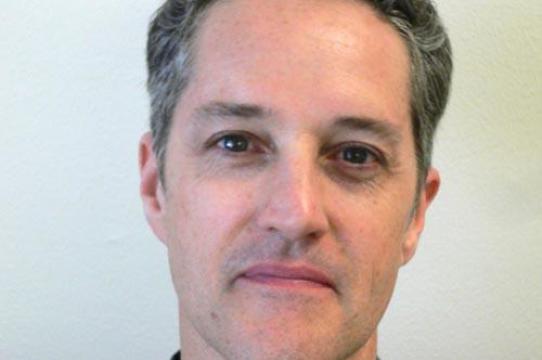 As Ted Warburton, Professor of Dance, anticipates his new role as Associate Dean of the Arts Division at UC Santa Cruz, he is looking forward to working on a wide variety of issues including academic personnel, budget and research. He’s also currently working with Assistant Professor Gerald Casel on creating an MFA program in Dance for the Theater Arts Department.

“It’s really important to enable students who come here, and who have trained their whole lives in a dance studio, to keep dancing,” says Warburton. “Many of our students are Biology majors but want to keep dancing and so they’ll be able to have Dance minors. I think it’s important to honor that and give that distinction to them.”

Warburton is excited to learn about his fellow faculty’s work and to ensure that the personnel process moves smoothly. “I want to help everyone get what they deserve and they should have,” he says. “One of the things I think that Dean Yager has done in an exemplary fashion – and he’s done many things – but what I see in particular is how my colleagues and the quality of the faculty have dramatically diversified. We’ve always had excellent faculty, but now the level of faculty have national and international profiles in every department.”

Before joining UC Santa Cruz in 2004, Warburton enjoyed a successful career at New York University directing its dance program, and prior to that was a professional dancer at one of the world’s most renowned ballet companies, American Ballet Theater (ABT). In between dancing professionally, he just happened to earn a BA in English and Dramatic Literature at Boston College, and then an EdD in Human Development and Psychology at Harvard University.

Originally from the Los Angeles area, his family moved from there to the “back woods” of Northern California in Mendocino County when Warburton was 13 years old. “I looked at my parents and said, ‘so where am I going to dance?!’”. The answer came when he heard about the dance program at the prestigious North Carolina School of the Arts (NCSA) and asked his parents if he could attend. They agreed, giving him a lot a support to pursue his talent, and off he went.

Coming from a very athletic family, Warburton first got interested in dance by way of participating in a variety of sports, including football. “I enjoyed it and played up to my junior varsity year,” he says. “But I decided that I didn’t want to get hit anymore, or hit someone else. Sports can be violent, especially football.”

And how did he segue from football to dance? “A girl,” he laughs. But it turned out that the athleticism of ballet combined with its aesthetic value really grabbed him. “I just felt a passion for it, so I was always dancing and trying not to let many of my friends know!” He was also trying to fit in with everyone else at the same time. “At some point, I finally said ‘I need to be who I am and not try to conform.’”

Warburton’s family also liked to folk dance together, so some form of dance was already familiar to him. Once he was introduced to ballet, he found that he loved the discipline of it and the way it created a particular mind and space. After graduating from NCSA at age 17, he auditioned for ABT and was accepted into the their touring company, ABT II, travelling with them around the country and the world in a variety of productions.

Under famed dancer/choreographer Mikhail Baryshnikov, ABT started leaning towards hiring guest artists to dance the more prominent roles. “Baryshnikov was running the company and he was a brilliant role model,” says Warburton. “And a beautiful, beautiful dancer and person, but I looked at the guest artists flying in and how it created an upper tier, and thought, ‘I don’t want to hold a staff in the back of Sleeping Beauty for the rest of my life. I want to dance.’”

From there, he put his sights on the internationally acclaimed Houston Ballet and was drawn to the company, not only for it’s reputation and aesthetic, but also because it provided its dancers with longer contracts, ensuring he’d have a more steady income than most regional companies could provide. “I loved it and had great opportunities to dance there,” he says. “But I wanted more, so I jumped to Boston Ballet.” That move turned out to be an extremely fortuitous one, leading him eventually to Harvard and to a new, fascinating area of study.

Knowing that dancers careers tend to be short, Warburton’s parents really encouraged him to get a degree. So while he was dancing in Boston, he took evening and summer courses at Boston College, earning a BA in only two years. One of his professors there was married to a professor at Harvard, Howard Gardner, who was developing what was considered to be a revolutionary approach to intelligence, and had come out with a controversial book about it called Frames of Mind: The Theory of Multiple Intelligences. When she discussed this with Warburton, the ideas in the book really resonated with him, especially the theories around bodily/kinesthetic intelligence, and he decided to look further into Gardner’s theories.

“At that time, [the1980s] Gardner was directing a program begun in the 1960s by Nelson Goodman called Project Zero that focused on arts and arts recognition. The cognitive psychology revolution was taking place and there still wasn’t research being done around thinking in the arts and how the arts are not just about being inspired, but that there’s actual cognition involved.”

He spent eight years with Project Zero at Harvard while also continuing to dance, but getting involved in more improvisational and contemporary works. The challenge of pursuing both this academic and artistic practice became paramount, making Warburton realize that he needed to be somewhere where he could successfully do both, and NYU gave him that opportunity.

While there, he became very interested in intersecting dance and technology, especially the idea of multi-site performances taking place at the same time but in different areas, otherwise known as telematic performances. Warburton is also very interested in working with dance in 3D and how it has the potential to revolutionize how audiences experience artistic movement.

He really enjoyed his time at NYU, but when the opportunity to join UC Santa Cruz came up, he knew it was time to move. “It was a homecoming of sorts for me,” Warburton says. “And a couple of things had shifted for me. I was getting married and we didn’t want to raise in a child in New York, and NYU was going through a lot of changes.” With the faculty being expected to spend a lot of time on recruitment and admissions, Warburton was concerned how that would impact his work and the exciting projects he had been doing there with motion capture and computer scientists.

“Once in a blue moon, jobs come up at UC, and when they do, you have to throw your hat in the ring,” says Warburton. “Dance has always had a home here and plays an important role. And I have time to do the work I’m really interested in. My work has really grown in ways it wouldn’t have if I had stayed in New York.”

Warburton also appreciates the beautiful surroundings of the university and the creative energy of the students. “It’s awe-inspiring almost daily,” he says. ”There just isn’t a campus in the world that sits with its back against the redwoods looking down on the Pacific Ocean in this way. It’s the combination of a rigorous, intellectual community and a vigorous artistic life. And the students who come here are so wide open, so creative, and so engaged with learning.”