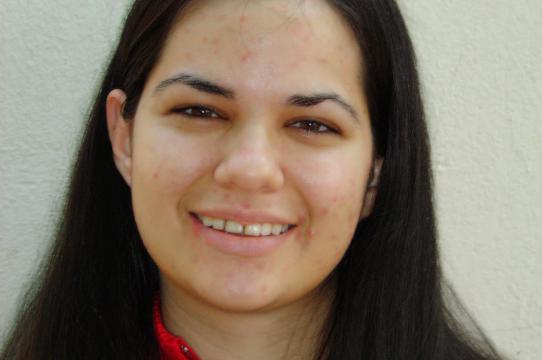 Growing up as an Afrikaner in Johannesburg has given Nicol Hammond a rare perspective on racism, social justice and their impact on many areas, particularly music. South Africa was at the height of Apartheid (literally meaning “the state of apart” in Afrikaans) when Hammond was born and had about ten more years to go before it finally broke down in 1994.

“During the last decade of Apartheid, the government was really clamping down,” said Hammond. “There was a lot of police action. I started singing in primary school, in choirs, when the political transition started to happen.”

This major political shift, as Apartheid was being phased out, could be seen everywhere and Hammond, who was taught in Afrikaans, especially noticed it while in class. “There was this change in the repertoire in school,” she said. “We’d always sung Afrikaner music and then we started singing this very vibrant music that really got me going.” The South African government was using cultural activities, including music, as part of the new nation building effort and to bring people together. Hammond keenly observed during this crucial time in her country’s history how Afrikaners had used their culture to divide groups. Now, just the opposite was happening, as cultural activities were key to bringing two extremely separate cultures together.

“We used culture to separate people before,” she said. “But then when the integration began, one of the ways to do this was to integrate the cultural programs. Children will accept racial integration much more so than adults, so if you get them singing together and doing activities together, they are much more likely to merge.”

Hammond felt fortunate to have excellent teachers and, along with choir, studied conducting. She had one teacher who encouraged her to delve into examining choral integration. “I wanted to study how music deals with integration and the cultural differences,” she said. She had been obsessed with classical music and was a huge fan of Bach and Mozart’s operas, but also was influenced by Barbra Streisand and Julie Andrews (both inspired her to sing), as well as Janice Joplin and other more cutting edge vocalists.

After completing her undergraduate studies in Johannesburg, Hammond was eager to branch out and leave her homeland to pursue graduate school, and landed at New York University where she found the music teachers to be inspirational. During her time there, she focused on becoming a music scholar, starting with her own roots.

“I wanted to find out how Afrikaners were dealing with the transition,” explained Hammond. “I’d taken most of my music lessons from Afrikaners, who had been the pariahs of the society. But because I had been taught by them, I found them welcoming and I wanted to understand how all of that was working.”

She started by exploring popular music, especially since it was fused with so much political commentary due to the upheaval that the tearing down of Apartheid brought with it. She took an ethno-musical focus and looked at how music fans were into community and culture building. She found that there was an undercurrent of music that was helping South Africans deal with racial differences and bridging cultures to develop a new nation.

Her research also lead her to South African singer/guitarist/song writer Karen Zoid, who became the subject of Hammond’s dissertation. “I’d been a fan of Karen Zoid because she was performing underground Afrikaners’ rock music and doing something different that was alternative music,” said Hammond. “Afrikaner music tends to be homophobic, but she doesn’t identify as a gender and has a huge queer fan base. There had been rumors about her sexuality and she’s also dealing with issues around race.”

Most of the information Hammond found about Zoid was through online fan communities and she was curious about why people were talking about Zoid being a lesbian. She went to Zoid’s concerts and spoke with audience members. “I would go to the concerts,” said Hammond. “And people would say, ‘There are the lesbians over there. You can see them. They all dress alike,’ which made me laugh because they were talking to me and I was not standing over there, dressed like the others.”

Hammond has discovered that there’s a very similar history of ‘70’s queer fan communities, so she’s going to be studying more than one musician, but will still focus her thesis work on Zoid and her fans. She’s been struck at how dissimilar diversity issues in the U.S. are from those in South Africa, and their influence on music. “The way in which diversity works in America is really different than South Africa,” she said. “The U.S. is very focused on how immigration works, especially on the coasts. There was a time when making music here had a nationalist aspect to it, like the Sousa marches, Charles Ives…creating an American sound. Now, music is created to be imagined as universal and everything’s that not American is World music. In South Africa, there’s an urge to make music that has a very local sound to it.”

As she gets more acclimated to being out here from New York, Hammond has been enjoying all of the beautiful surroundings at UC Santa Cruz and the laid back atmosphere. “This area is a lot closer to what I grew up with, a lot like Cape Town, with warmer weather all year,” she said. “People are very friendly and there’s a real sense of connection to the community here, which I was missing in New York.”

Hammond is really enjoying teaching at UC Santa Cruz and feels very lucky to be able to look across a gorgeous vista of the ocean from her office each day. “I can’t tell you how fabulous it is to have these really, great thoughtful, interesting people here doing unusual work in such a wonderful environment,” she said. “I have amazing students who have really impressed me.”

She’s been teaching Cultural Musicology and is hoping to teach across all of the music disciplines. She’s also very excited to be teaching Music of the Grateful Dead next quarter, which has been a very popular course through the years, and also focusing on teaching popular music studies and its significance in academia and the world outside of academia.

Making inroads into the Bay Area music scene through her students is something Hammond is looking forward to as she continues to explore Santa Cruz and beyond. “This is a very vibrant area. I couldn’t have asked for a better place to land!”