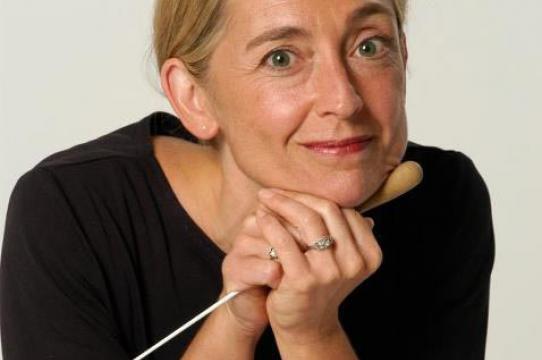 Aiming her spring-loaded energy squarely at the international opera world, conductor Nicole Paiement has surfed a few career changes since arriving at UCSC in the early '90s.

Currently director of the Music Department's Ensembles and Artistic Director of Ensemble Parallèle since its foundation in 1994, maestra Paiement has hit her stride as an interpreter of contemporary opera. With Ensemble Parallèle—dedicated to contemporary chamber opera—Paiement has recorded many world premieres, commissioned new works and toured a variety of countries. A recent conducting appointment at the Dallas Opera helped open yet more doors in a profession that remains a challenge for women. The chamber opera performance of The Lighthouse by Peter Maxwell Davies, marked only the second time in the 54-year-history of the Dallas Opera that a woman conductor took the podium.

During her first decade at UCSC, Paiement focused on conducting and recording rare orchestral music by little-known composers. such as Germaine Tailleferre, Marc Landry and Darius Milhaud. A single opera production changed everything.

"It began with Lou Harrison's Young Caesar," she recalls.  After several years of working with the composer and adapting the opera, Paiement and director Brian Staufenbiel mounted the previously unproduced opera in a world premiere at UCSC. "After that, I realized I would need to create a board to support an opera company. That was 2005." Young Caesar was the Quebec-born Paiement's first project as a fully-staged operatic production. Next came the west coast premiere of John Rea's re-orchestration of Alban Berg's Wozzeck, the San Francisco premiere of Philip Glass' Orphée and most recently a chamber version of John Harbison's The Great Gatsby.

"As difficult as Young Caesar was—and as flawed as it was—we had a great time putting it together," she admits. "Opera brought together my love of working with singers, and with orchestra. And it added drama. I was always seeking the dramatic in music. Plus opera is the ultimate collaborative process."

Almost immediately Paiement's current focus on opera began to take on its own life. "To really succeed, I realized that I needed to focus on one area. And in opera I also found the art form that I felt I could do the best. That was what I believed strongly—to find and concentrate where I could do my finest work." Another motivation for specializing in opera was Paiement's passion, "to expand the repertoire of contemporary music." Contemporary music, she believes, "lags behind the other art forms today.  People seem to have more trouble with modern music, than with modern literature or art. But opera encorporates so much visual excitement—and narrative. That makes it easier for people to become involved."

With another high-wattage smile and shrug of the shoulders, Paiement continues. "That's how I came to do it. And I found that if you're on the right track in your life, things open, lots of opportunities. I also believe that if your work is a constant struggle, perhaps that is not the right path."

The most rewarding recent event for Paiement was the Dallas Opera experience. "They have only invited one other woman to conduct. They are a major company, so when Dallas asked me to do The Lighthouse by Peter Maxwell Davies—I was very interested." She chuckles with pleasure. "They were beginning a series of contemporary opera productions, and this was the inaugural project. So they called me. That was just last month! And I have another project with them already scheduled." The Lighthouse was difficult.,Paiement admits. "I worked on the score for a year and a half. But the singers were beautiful, and it was a collaboration between their opera and their theater. It was an exciting project.

With the recent Dallas Opera coup under her belt, Paiement's creative opportunities have continued to advance. "When you get to conduct with a major house, doors open," she admits. "And now with Ensemble Parallèle" she grins excitedly, "we've decided to grow into a full season. It will now be called Opera Parallèle."

Paiement's infectious drive and astute musical instincts makes it easy to chart her continued success in a rare and difficult field.