Patty Gallagher - Behind the Scenes 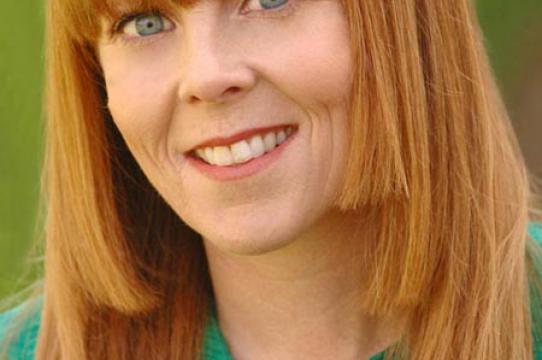 It wouldn't be a stretch to call Patty Gallagher a one-woman show of dramatic scholarship, innovative teaching, and cross-cultural performance practice. In short, a hard act to follow. Currently Professor of Theater Arts at UCSC, Gallagher is also an Artistic Associate at Tucson's Rogue Theater, where she performs in at least three shows a year. "The Rogue group is very literary, brainy, with a high sense of purpose," she explains, "and I'm really grateful to Rogue—they have developed particular projects around my skills and interests, acting as well as choreographing. Rogue offers me a laboratory in which to do my work."

Gallagher, whose background includes acrobatics, Balinese dancing, and clown work, rarely sits still. "Mostly I'm an actor who likes to move," she grins. And the need to perform arrived just in time to save Gallagher from becoming an accountant.  "My father was an accountant, and I was an accounting major until the middle of college." She rolls her eyes for emphasis. "At the suggestion of a dear and influential mentor in my life I took an acting class." Pause. "I was stagestruck." And she never looked back.

Gallagher's first theatrical role occurred in her high school Spanish class. "I played the wicked witch in a Spanish version of Snow White, in Phoenix where I grew up." She considers her research worlds to be Bali, Ecuador, Arizona, and Shakespeare. Ecuador happened because, right after Gallagher finished her PhD her husband received a job offer. "I really needed a break after the dissertation," she laughs. "So I told him 'take the job—we're moving to Ecuador.'" It was during those years, 1998-2000 that Gallagher began working with Teatro Malayerba and Cronopio for the first time. Later, thanks to a Fulbright grant, she returned to Ecuador and worked with both theater groups. "It all turned into some of the most richly thrilling experiences I've had as a theater artist," she recalls. After a dissertation in performance studies from the University of Wisconsin, Gallagher's two-and-a half-years in South American made indelible impressions in her creative sensibility.

The return home found her in Silicon Valley, where she connected with the only person she knew in the area, fellow performer and mask artist Kathy Foley who invited her to come up to the UCSC campus. "I thought this was the coolest place in the world. I began teaching in the Porter Core course, and later a movement for actors class with Theater Arts. Then more courses opened up. I was a really happy lecturer," she recalls. "And then a tenure track position opened up."

About the time she embarked on her UCSC career, the brand new Rogue Theater company asked her to come teach a workshop. "The two research posts fit together well. At Rogue I act and choreograph—at UCSC I teach and direct. I directed Paul Whitworth in his Research lecture, Krapp's Last Tape. And I also do a lot of work with Shakespeare Santa Cruz."

Patty Gallagher admits that yes she does live her life in perpetual motion. "I am in a hurry to do this sort of physical work, because it requires a springiness, a physical toughness that doesn't last forever," she grins philosophically. "Right now my body is powerful, and I still feel happy to do all the gymnastics, the backsprings, the cartwheels." One of the enduring themes of her performing and theorizing, is clownwork. "Humility, humanity, especially a sense of wonder—all are embodied by clowns."

"There are clowns in every culture," she adds with relish. "They press against power, Shakespeare's clowns for example." Gallagher teaches and researches clown traditions—Lecoq-based, American, Russian and Chinese circus traditions, and Balinese." She is currently exploring fools and clowns in Shakespeare. "When I was performing in Washington on my recent sabbatical at the Folger Theater, I had access to the Folger Shakespeare Library." Gallagher is continuing that research in preparation for a show about Shakespeare's clown characters, "collaborating with scholars and actors from DC and New York."

"I like the concept of the clown, not the actuality of the schtick," she confesses.  The clown as perpetual outsider, as stranger in a strange land—like Buster Keaton," she says pointing to a movie poster of the silent film master. Gallagher has written about the common threads linking together clowns from a wide range of cultural and temporal contexts, from Shakespeare's fool—allowed to critique the monarch and courts—to mime-based festival performers, gymnastic clowns of such "new circus" companies as Cirque du Soleil, to clowns of Bali whose antics are part of sacred ritual.

Patty Gallagher's dance card is quite full. "I continue to do a lot of training in theatrical mask traditions from around the world." And soon she's starting a one-person show called Kafka's Monkey. "The play is a recent adaptation, by playwright Colin Teevan, of Kafka's short story, "Report to an Academy," in which a character named Red Peter lectures an academic society about his former life as an ape." She admits she's excited "and also terrified" about doing the one-person performance. "I've had a lot of big roles, but I especially love collaborative work. Actually I live in this ideal feedback loop — like a Mobius strip— teaching, acting, acting and teaching. One is very vulnerable," she introspects.

Could there be a path not taken? "If I had a second dream career," she responds without hesitation," I would open a no-kill dog shelter." She points toward the framed photographs of her two golden labradors named for characters in A Midsummer Night's Dream. "I feel that I understand dogs better than people." Gallagher admires these animals for their lack of guile, their kindness, and gentleness. Their calm, she adds, is the "counterbalance and antidote to the mad whirl of the performing artist's life."