B. Ruby Rich Reframes the Question 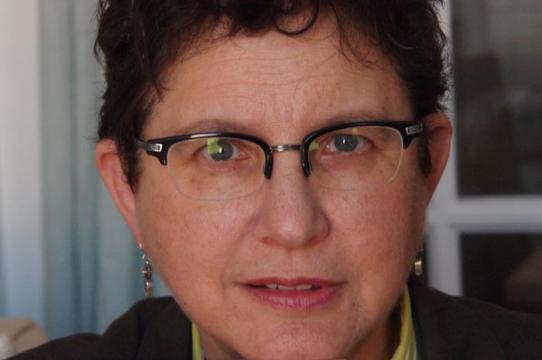 Expressive, energized, and utterly loquacious, B. Ruby Rich is thrilled to find herself the recent cover girl of the SF Chronicle's weekend Calendar section. "I'm pretty bad about honors," she confesses. "I either think, 'what me? really?' or 'it's no big deal.'" Rich received the prestigious 2012 Frameline Award at the 36th annual San Francisco International LGBT Film Festival this June. Famed for her film criticism, as well as her influential book Chick Flicks: Theories and Memories of the Feminist Film Movement, Rich is also renowned as the originator of the term "New Queer Cinema" for new filmmaking styles featuring lesbian and gay protagonists.

According to a recent Chronicle article, Rich's influence—ranging from Sundance Film Festival panels to articles written for the Village Voice—are considered "watershed moments" in the LGBT film community. Of the Frameline honor Rich admits, "It was a very big deal. Vito Russo received the very first Frameline award, and then it never went to a critic again. Until this year," she beams. "So it is extraordinarily meaningful. So was the standing ovation in the sold-out Castro!"

Rich began her career in film exhibition in Chicago before moving to New York to become the director of the film program for the New York State Council on the Arts. The move west came in 1992, when Rich taught at UC Berkeley before coming to UCSC in 2004. Currently Rich is engaged in developing the SocDoc program while maintaining a robust schedule curating film series and conducting on-stage interviews at screenings and festivals. "There are just a few of us here in SocDoc. We came over because of David Yager's energy—he really understood the vision of social documentation. That it's not just the need for equipment," she believes. "That it's genuine research."

The Soc Doc program now offers a Master of Arts degree, "but we're working on getting an MFA program. Santa Cruz is the right place for this program," she believes. "I originally came here for conferences. It had great energy, and I knew Renee's work. I had funded her first feature when I was a New York State bureaucrat," she adds with delight. "They needed someone to teach documentary history and theory. I also teach editing, and even though I am not a filmmaker," she is quick to stress, "I can show students how to make the film better. I was always in people's editing rooms when we funded film projects in New York."

Of Chick Flicks and Beyond

After years in alternative journalism, Rich published her first full-length book, Chick Flicks, in 1998.  "It helps to get a contract," she grins.  "The reason I wanted to put the book out was to communicate.  I used to write for the free weeklies—the blogs of their time." Chick Flicks compiles Rich's celebrated articles. "Then I created prefaces for each article. They dealt with my life, what was going on in the community, the battles in academia. It's full of academic intellectual dirt," she points out.

Rich coined the term "New Queer Cinema" in the mid-90s. That brand was important because even though Rich says she had been coining terms for years —"Neo Noir, Homo Pomo—none of it took. But when I published a Sundance Festival piece, with the title 'New Queer Cinema,' people cared." And what laid the groundwork for this new film genre? Rich has a ready answer: "AIDS, Reagan, the invention of camcorders, and cheap rent."

Her schedule sizzles between teaching, writing and following up on each of her projects. "I just curated a film series at UCLA on New Queer Cinema —an homage on its 20th anniversary. I conducted on-stage conversations— and I'll do another series of screenings in the Fall." Rich's latest book New Queer Cinema is currently in the hands of editors at Duke University and will come out next Spring. "It's half new writing, and half articles from the past," she explains. "I'll do a lot of events around this new book, so I haven't jumped into another book." Yet. But Rich will confess that she has new research simmering, at least in conceptual development.

Rich thinks of Soc Doc as a lab." It's not journalism, it's op ed. Soc Doc goes 'beyond the story,': she chuckles. "We drill deeper. Students are trying to say something about the area they study. It's not just a tool."

The Question of Film Festivals

Rich's upcoming plans include continuing to develop SocDoc in its new position within the Arts Division. "As far as my research, I'm not done with new queer cinema yet." She also has her eye on film festival studies, "an emerging field" she says, raising her eyebrows for emphasis. "I was on the original screening board for Sundance. I chaired the panel that announced the new queer cinema—I've always been interested in festivals," says the veteran of countless Cannes, Havana and Toronto film festivals.

"I'm very involved with documentary filmmaking and how its changing. Questions like, What do people consider evidence? Why do people believe documentaries?" She is also conceptualizing a book on changes in the physical setting of films. "I'm looking at movie theaters, from the big movie palaces to ugly multiplexes," she laughs. "Now it's downloads, films are on iPhones. Originally cinema was small." Rich's plans for SocDoc at UCSC are nothing if not large.