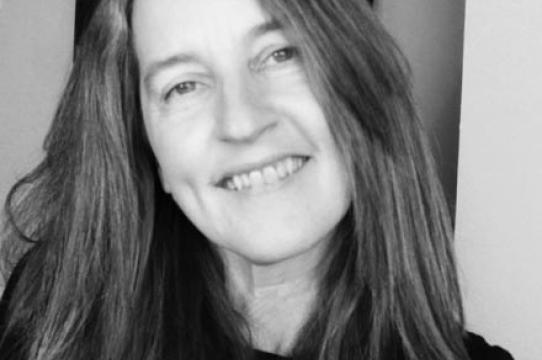 Recently working with a team of environmental architects in Alaska, Film and Digital Media professor Sharon Daniel has been a pioneer explorer in participatory online media. Since 2000 Daniel has worked all over the world with groups documenting their own community stories on interactive web sites. Raised in Tennessee, Daniel admits that while she was passionate about theater, she ultimately took a major in music to please her parents. "I did a masters in opera production and stage direction," she explains. Next came an MFA in painting, and one thing just led to another. Now she is a key player in the Digital Arts/New Media program as well as a vigorous researcher in collaborative video archiving and web-based dialogues.

A 2006 project, Palabras, took Daniel to the margins of Buenos Aires where she worked with young people to create an interactive website documenting their own stories. From Palabras sprang more workshops and collaborations documenting social change. "Using the Palabras model as a tool we went to Kiel Germany and did a ten day project mostly with immigrants." Daniel's research took a new direction once digital imagery became a global reality.  "There's still value in the participatory web work, but with YouTube everyone can now disseminate films easily."

"So I started a longterm involvement with incarcerated women, using an Oakland organization as a base." Inflected strongly with themes of social justice, what became the Pubic Secrets project took Daniel to prison populations in California documenting human rights abuses. In this work the incarcerated narrators told their stories first hand. Daniel was well underway in making the transition from interactive web developer to video narrative archivist.

"Another recent collaboration was with a needle exchange program." Daniel brought disposible cameras to her subjects for them to use filming themselves. The ultimate project that came out of the many hours Daniel spent meeting with, and attempting to meet with users of the needle exchange program resulted in Blood Sugar, "another interactive site of interviews. That experience required so many hours of work," she recalls. "Picking them up, waiting for them, them not showing up. In some ways I did feel at first that it had failed."  But ultimately, after many changes of venue infrastructure, Daniel retrieved 24 interviews explicitly focused on addiction.

How does such social activism fit under the umbrella of art? Daniel responds that her work is about representation — visual culture and culture in general. "Art making is like all scholarship," she contends, "adding new information, fostering changing, changing people's understanding."

Daniels describes her work as a documentary art practice, "although I'm not a filmmaker. These are visual and auditory records. The political part of it is the content — providing new knowledge.  Social practice programs are popping up in art departments everywhere," she observes. "The community, the environment, social responsibility has been an emerging area of art making, and we focus a lot on that in DANM, where research and curriculum is driven by faculty interests."

Undoing Time is a video piece which was organized as discrete modules around products made in prisons. Daniels points to a police marksmanship target hanging behind her desk, upon which quotes from prisoners had been cut-out by laser. "I bought flags," she says "and I did computerized embroidery of quotes from the prisoners, as well as from an editorial piece written by Henry." Beverly Henry was a key informant that Daniel had met in prison, "a woman who had been in prison most of her life, suffering from addiction disorders."  Upon her release from prison, Henry met with Daniel.  "We spent the whole day of interviews on all the factors of her life—addiction, race, povery. I asked her if she would like to take one of the flags apart on video. And now the video is part of an installation.

Public Secrets was exhibited this year in Louvain. "While I was there I gave a talk at the Louvain Instiute of Criminology. We got to talking about restorative justice practices." Daniel explains restorative justice as an opportunity for victims to address their offenders. "This sort of mediation is state-funded in some countries."

"I don't just want to do critiques," she explains. "I want to encourage questioning and present a possible model of alternative solutions. This has led to an on-going collaborating between arts and non-arts researchers, between the criminologists, the art center and me.

The collaboration resulted in an interactive documentary Inside the Distance—and represented the fourth installation by Daniel shown at Louvain. "It's highly aesthetic and I'm very happy with how we materialized the works into screen-based time." The images, stills and video from staged 'enactments' based on interviewees narratives are accompanied by Daniel's voice over as well as audio interviews with victims, offenders and mediators.

Daniel's most recent research involved an invitation by a group of architects whose NEA grant helped to bring in social practice artists to an Alaskan native community inside the Arctic Circle.  "They're looking at climate change, pollution, environmental degradation, historical trauma, culture classes," she notes. "I was invited to go with three architects and one climate attorney to deal with tribal relocation." The relocation began in the 1950s, "and now is involved in a complex web of governmental bureaucracy," Daniel notes.  "A small subset of the original tribal group plans to develop an archive of the history of this relocation program."

Which is exactly where Sharon Daniel comes in.