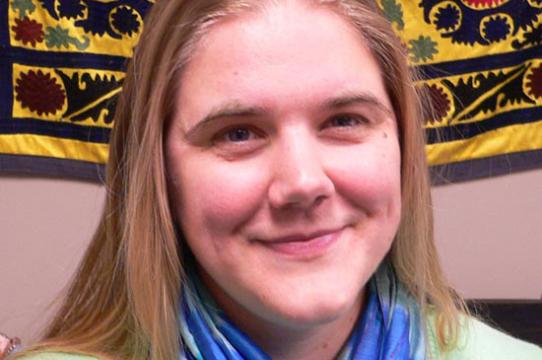 In a rare pause from fieldwork in remote Central Asia, counseling doctoral students, and performing dutor folk music, music professor Tanya Merchant reflected on an emerging career filled with lucky encounters. That she happened to be raised in Sitka, Alaska—where her mother was a member of a Russian folkdance ensemble—helped instill Merchant with a lively curiosity about this folk art practice. Merchant's interest in music of all genres led her to the Peabody Conservatory where she took her undergraduate degree, specializing in bassoon.  "I also started taking ethnomusicology classes and realized that all the music of the world was on a level playing field, pop music, classical music, the entire soundscape."

While in England performing baroque bassoon, she attended a conference on Russian music at Goldsmiths College, University of London, home to an important Prokofiev archive. Merchant's research area began taking shape and she took her masters in England. One thing led to another and pretty soon she was on a train trip that was to determine her future research. On the train she met Uzbek ethnomusicologist Razia Sultanova. Thanks to language studies in high school and college, Merchant was able to strike up a conversation in fluent Russian. "Next thing I knew she invited me to her New Year's Eve party, where everybody had to perform something musical." Giving in to pressure, Merchant sang "Oh Susannah" as her contribution. The host, in turn, pulled out a long-necked 2-stringed instrument called a dutor and proceeded to give Merchant a few extemporaneous lessons. "I was both embarrassed and fascinated with my initial efforts."  But the dye was cast.

"I did my PhD at UCLA and became aware of a musician at Tashkent called Malika Ziyaeva, who was a member of a prestigious ensemble at the Uzbek State Radio and Television Company," Merchant recalls. Ziyaeva proved to be another important encounter on the trail to Merchant's ethnographic research on Uzbek women musicians, and on gender and nationalism as they intersect Uzbek music. Especially involving the dutor.

Uzbekistan has formed the focus of Merchant's research for over a decade, including a year and a half spent on location. "The society as well as the music has engaged me," she admits. "I'm finishing a book about women and music in Uzbekistan. What has interested me in my writing is how many successful projects are headed by women in this culture." Women are heads of organizations, the leaders, very powerful in music, both in "arranged folk music" and in the traditional work," Merchant contends. "They are working to keep this relevant in the post-Soviet era."

The Politics of Music

There was a women's liberation movement in Uzbekistan from the top down, Merchant notes. "There was a very different history of feminism here. It's a problematic history. My larger question is how do discourses of feminism and discourses of musical worth intersect to support Uzbek culture and its view of itself.  For me the traditional music was the most fascinating, the most beautiful.  Especially maqam the urban medieval court music." The Silk Road supported large cities, "they had their emirs and they would have their court music. This is what my teacher studied. Generally in the Uzbek music there is one vocal line, she explains, a single melodic line with simultaneous variations.  "Heterophony is very important aesthetically—you get a shimmering, multi-line effect, with performers singing and playing the instrument at the same time with different variations."

After her Uzbek book is finished Merchant plans to "keep her toe in Uzbek music" by polishing a few articles for publication. As the climate for field work in Uzbekistan worsens, Merchant has begun new research on Sevdalinka, an urban folk song genre. “I went to Sarajevo with a five-month-old," she grins. ”It's a much more child-safe research site than Uzbekistan," she adds. This genre is very important, Merchant contends, with its roots in Turkish and Ottoman societies.  "My big question is, after the 1992-95 war, what's happening to this music?  Some Yugoslavian musicians have returned, and there are young people exploring new directions for the genre—there are even avant garde versions. They are continually innovating to keep Sevdalinka relevant."

Next year Merchant is hosting Ziyaeva, her primary Uzbek musical mentor, for three weeks here at UCSC. "I'm excited to bring her here. To show her that my music majors can play dutors," she beams. "And I want to give them experiential knowledge of the maqam art music.  I'll be interested to see what she makes of our ensembles and American educational system."

Music was my first love, and the research in both Bosnia and Uzbekistan—two ends of the Turkic empire—share many similarities."