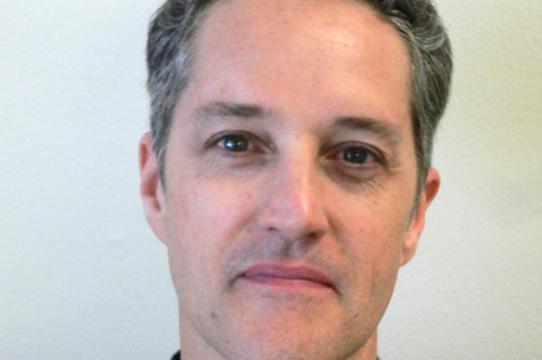 Theater Arts professor Ted Warburton has been working on the kinetic connections between intelligence and dance for the past decade.  Exploring "the major intellecual and artistic decisions behind dance," he seeks paths to outwit the tired cliché that "dancers don't think, they simply behave."  At the core of Warburton's interest lies what has been called "embodied cognition."  Warburton will present some of the lively episodes in his research passion in the 2013 Outstanding Faculty Research Lecture on May 16.

“Thinking through dance has interested me for a long time,” he confesses. "I've long been astounded at the amazing mental capacity of dancers, their being able to memorize elaborate patterns of movement.” Having worked as a professional dancer, Warburton has had a chance to explore from the "inside" what it is that dancers are doing. This interest led Warburton to work with Harvard researcher Howard Gardner and the multiple intelligence theory that led to Gardner's classic text Frames of Mind.

"We've come to respect rationality above everything," Warburton observes, " but evolutionarily speaking we have multiple forms of intelligence." He became interested in the linkages between cognition and creativity after a professional dance career, while studying for a doctorate in human development and psychology at Harvard University. “Despite the centrality of dance in human experience and the proliferation of dance studies, there has been little effort to advance a psychology of dancing,” Warburton notes. Much of his work involves answering his own prime research query: “How do dancers construct and integrate all the necessary information to perform highly sophisticated physical tasks?"

"I came to Harvard as Nelson Goodman proliferated the theory that artistic learning should be taken seriously as a cognitive activity," he observes. " I had the field experience—I was the 'dance guy'— and I was aware that all the decisions I made as a dancer went against the 'dumb dancer' stereotype." The upcoming Arts lecture will give Warburton the opportunity to showcase the research he recently published in the Dance Research Journal, "Of Meanings and Movement."  The talk will "connect my over-arching research ideas—empirical, performative, and conceptual."

3 Bodies and a Paradox

"I tend to say 'yes' to projects that interest me," Warburton grins. He said "yes" last year to an interdisciplinary experiment in physics, music, and movement that led to a digitally-layered performance piece on the theme of a Pythagorean conundrum.  "Greg Laughlin from Astrophysics approached me, and at first I didn't really respond. The topic was about a complex astrophysical problem—a hard core law of physics problem, one of those conceptual issues that can be hard for students to get," he recalls.  "Laughlin contacted me again. He thought that dance could help visualize some of these difficult issues." Enter Warburton and three dancers. Adding a layer of improvisational as well as composed music by Arts colleague Karlton Hester, the 3 Bodies project was performed once last year, and will become part of the upcoming Blueprints Faculty Dance Concert at the end of May 2013. "The hope is that next year we'll bring in more artists, scientists and tech people to put together different solutions to this Pythagorean paradox."

Warburton clearly thrives on collaborative exploration. "I was schooled in that approach. You have to bring to it a deep disciplinary understanding—and I have that in dance and psychology." He also admits that, "collaboration does take me out of my comfort zone." Warburton's ultimate calling is dance itself. "Going into the studio and teaching is my comfort zone." In his studio/laboratory, Warburton seeks out the subconscious "bodily rhythms" of the body. "In dance, it's a process of making the implicit processes, explicit." The trick is to make them implicit again onstage. "You can't be thinking about it as you make the art."

Currently Warburton is working with a transcultural dancemaking group called ArtsCross. "I am traveling a lot, working with other artists and thinkers, and working with choreographers on dance in 3D."  He cites the recent Wim Wenders 3D documentary on choreographer Pina Bausch as a model. Warburton suspects that 3-D technology will revolutionize how we experience artistic movement. "It could do for dance what stereo did for sound."

Essentially Warburton thinks of himself as "somebody who makes dances.  I guess if I were remembered, I'd like it to be for a project. It could be a book, or it could be the 3-D project." He punctuates this last comment with a suitably broad, if inscrutable, grin.