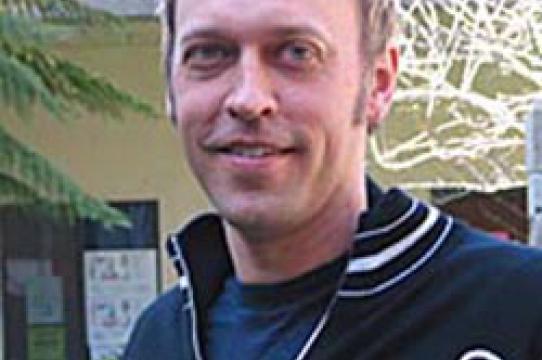 Chair of the Digital Arts & New Media MFA program, film professor Warren Sack is a pioneer in social computing research. Recently appointed an associate director of CITRIS's "Data and Democracy Initiative," Sack spends most of his creative energies at the intersection of arts and technology.  CITRIS—the Center for Information Technology Research in the Interest of Society—is a collaborative venture of four UC campuses working to engage citizens in issues of local democracy. Working with his DANM graduate students on "citizen-centered media design," Sack explores the aesthetics of public spaces found and created on the Internet.

Citing the recent Occupy Wall Street initiatives to illustrate, Sack notes, "It's great that tweets, the web, and documentation dispersed via You Tube have had a large impact, but so have old-fashioned methods of face to face comunication." Still Sack admits that digital media today are increasingly important as tools for the informed citizen. "When the UC Davis police sprayed occupy protestors with pepper spray, social media allowed for a quick response that caused public outrage.  There are so many factors at work in provoking activism," he notes, even-handedly. "But obviously this was one of them."

One of the key questions for his new Data and Democracy Initiative research is how these media actually connect with governmental politics.  "As I like to ask my students," he grins, "if you scream in cyberspace, is it heard in Washington"? Delivering viable technology to maximize political impact, according to Sack, depends upon design—design of software specifically to connect government with programs.  And much of his work is designing software, he explains, opening a relevant page on his Macbook Pro. At a meeting of the President's Committee of Advisors on Technology - PCAST -  various experts have been called to offer advice. "Green" advisors can also comment. "But there's no extended critique possible in that sort of real time, real space meeting." Sack wanted to facilitate a way that the meetings can be opened to other experts. "We're trying to provide a website that can add commentary that is highly moderated. We are trying to design software for citizens - and not the generic citizen, but skill-specific citizens."

Expanding the practical outcome of arts research, Sack's end product is a website.  "There's no perceptible difference between an artwork and a non-artwork," he likes to point out, "ever since Duchamp showed that simply by moving an object from one setting to another, its very identity was seen as radically changed. Art theorist Arthur Danto has argued that context is the single defining feature of an object, especially whether something is considered an artwork or not." Sack reasons that it is therefore appropriate to describe his work—a website, or a computer program design— as art, as well as technology. Of his co-directors in the D&D initiative, Sack reveals that " all three of us are also exhibiting artists," although he admits that his exhibited work often takes the undramatic form of "a projection of a website."

"What works for me - and what I try to tell my students - is to pick a problem." And the problem engaging him now is that of transforming public discussion into on-line formats. But isn't that what's going on all over the Internet right now? "Is current technology built the way it has to be for democratic action?" Sack responds rhetorically. "For example, computer programs are designed along certain aesthetic guidelines, such as user-friendliness, speed, efficiency," he continues. "But if you are interested in democratic ideals, the design for a program that will facilitate those is one that slows thing down, not speeds them up." Evaluative criteria for such programs might be quite different, "may involve aesthetics. What's good, proper, beautiful— as soon as you cast the disciplinary criteria as an aesthetics, you can see it differently," he believes.

"That's what we can do in the arts—and we are in the best position to do it."