Christopher Hackett Nails it in Performance, Play and Design 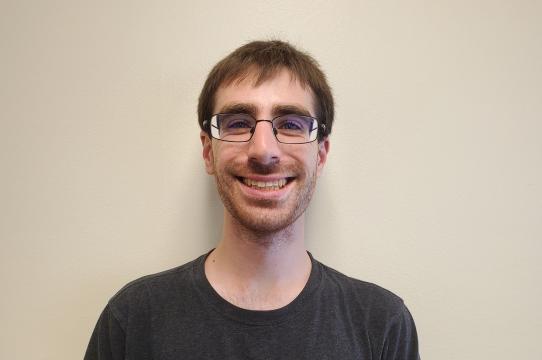 UC Santa Cruz alumnus Christopher Hackett didn’t intend to earn a degree in theater arts but fate had different plans for him. He was set on attending UCSC as a computer science major, determined to follow in his father’s footsteps as a computer programmer. But, as he found himself struggling with computer science classes, he also found solace working in the theater arts scene shop, which would eventually lead to his current job on campus and to him pursuing an MFA at one of the top universities in the country.

He originally chose to study at UCSC after visiting a lot of other more urban campuses. “I did a tour of the school and I really enjoyed the vibe,” he recalls. “It’s very different in a good way than my hometown. I liked the nature aspect and I really liked that it was sprawling and a little remote. A lot of colleges I toured were right in the middle of the city and UC Santa Cruz, while busy, doesn’t have that same frantic city vibe.”

Growing up in the small beach town of Carlsbad, California, Hackett appreciated the natural beauty that was right outside of his doorstep. Living near a nature preserve meant that his favorite pastimes included playing outside and riding scooters with his friends and younger brother. And he credits his parents with urging him to take school seriously. “They encouraged us to work hard in school and definitely pushed us in certain cases,” he said.

Even though he originally set a track towards computer science, Hackett’s love of theater started early on when in 5th grade and his mother suggested that he participate in the school musical. He didn’t want to perform, so instead he joined the backstage crew and found that he loved the experience.

“I worked backstage throughout middle school and high school taking tech classes and going to drama competitions for the tech side of theater,” said Hackett. “When I turned 18, I started working at a large professional theater (Moonlight Amphitheater) that put on a summer season. I did carpentry, followed spots and ran crew and that allowed me to get a job working at the scene shop [at UCSC] my freshman year.”

After graduating in 2018, Hackett worked in San Jose as a carpenter and then the following year was offered a position as an interim technical director at UCSC in the theater arts department (now merged with Art and Design: Games & Playable Media Program as the Department of Performance, Play and Design). He’s since become the technical director and runs the arts scene shop, as well as teaches students how to safely use tools and equipment for set building.

“Seeing the students learning a new practical skill and then several weeks later seeing them do the task without my help is really the greatest part of the job,” he says. “I also like the constantly changing aspect of the work. It’s never the same and each show comes with unique problems to solve. Each production we put on has their specific vision of what they want the show to be and working with them and helping them create that vision onstage is amazing.”

Next up for Hackett is to earn an MFA in technical direction. He’s already been accepted to Carnegie Mellon and is also considering Yale. “I want to go to a three-year program and hopefully my experience actually doing the job will help me in school. I want to keep learning and growing, and this is the logical next step in my career path.”

As he gets ready for an exciting future, Hackett is grateful for his time as both a student and staff person at UCSC. He appreciates the community of students, and the staff who are teaching students how to succeed after graduation by preparing them with invaluable career skills.

“It’s all about the people in any job, and everyone in my department is amazing and is willing to help anyone who has a passion for theater.”