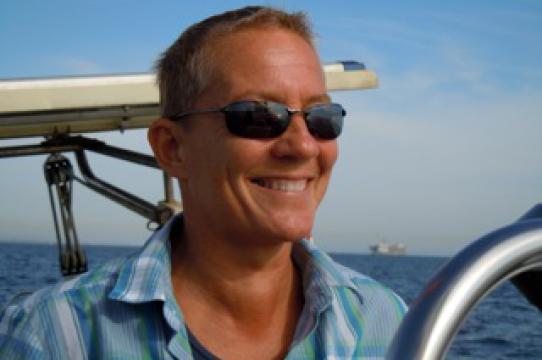 For 15 years, Hannah Pederson has been on staff at UC Santa Cruz, but it was actually her love of food and talent for cooking that brought her originally to UC Santa Cruz. Hannah, along with two other partners, owned and operated one of the campus’s favorite eateries, the Howling Cow Cafe, which was at Kresge College where the Owl’s Nest is now. “I was part of the restaurant for four years,” said Hannah. “We made our own breads, cookies and brownies, tofu burgers everything was really fresh. We also had free refills on coffee, so you’d see some really jittery students in there! And live music on Wednesday nights. It was a very fun community.”

She began her impressive career at UC Santa Cruz in the Registrar’s office reviewing narrative evaluations about students’ academic progress. From there, she moved to the Art History Department as the Undergraduate Advisor and Department Assistant, and then 11 years ago was appointed the Administrative Manager of the Art Department. She had earned her BS in Business Administration before returning to Santa Cruz and opening the café, and while in her current job completed her Masters of Public Administration.

“One of the things I love about working on campus is the work-life balance,” Hannah said. “I live nearby and can ride my bike or bus to work, and that’s a really beautiful transition at the end of every day. I always appreciate the beautiful view from the campus.”

As the Art Department Manager, her work focuses primarily on the curriculum and leave plan, faculty reviews, lecturer appointments, the undergraduate program, and the department budget. She supervises the staff research associates who provide technical support to the faculty, assists in organizing department events and visiting artists, and does her best to keep ahead of the curve regarding policy implementation and impact. “There is always some new puzzle to solve and I enjoy that challenge immensely,” she said.

Since 1991, Hannah has devoted her summer vacation time to working as a coordinator in the staff and performers’ kitchen for the Michigan Womyn’s Music Festival, which takes place every August and attracts nearly 10,000 participants. With her three other coordinator colleagues, she cooks, plans meals, handles inventory, sets up, serves, coordinates a staff of over 30 kitchen volunteers, and serves three to four meals a day. Now in it’s 40th year, the weeklong festival is a massive celebration of women from all over the world coming together to enjoy various music performances by female artists and a wide variety of intensive workshops that cover a myriad of topics from wood block printing and Latin Dance to Queer Yoga and Radical Feminism.

“The festival recharges my batteries,” said Hannah. “There are all kinds of music, dancers, poets and writers there. When I first arrive, we’re usually feeding about 20 staff people then during the festival we feed up to 700 staff and performers.”  After 24 summers in Michigan, Hannah is thinking about taking the opportunity next year to travel to far-off lands, with Australia, London and Spain at the top of her list of where she’d like to explore. Over the years, she’s made friends from all over the world at the music festival and is looking forward to visiting them.

Living in Santa Cruz since she graduated from high school, Hannah always looks forward to spending time with her family and cooking her favorite food. “I grew up in East LA, so Mexican was my favorite. I also grew up eating traditional Swedish foods during the holidays, so I like to combine those.” Hannah also enjoys helping her partner, Rose Calucchia, with her gluten-free baking company Sweet Cheeks Santa Cruz, a bakery that describes itself with “a little bit of sass and a lot of love.”

Next up at UC Santa Cruz, Hannah is excited about the upcoming gathering in April of the Academic Business Officers Group (ABOG), the annual UC-wide conference that UC Santa Cruz is hosting this year. She’s served on the executive board of the group for a few years. “All UC campuses will be represented at the conference,” she said. “And that’s what makes it exciting, especially since our turn to host coincides with UCSC’s 50th anniversary.”

“I’ve had consistent support to participate in campus-wide committees and professional development opportunities,” said Hannah. “I love working in the Art Department and have really appreciated the support from the department and division over the years.”