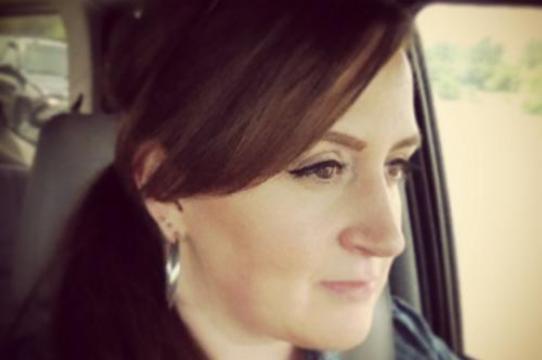 In junior high school while many other kids her age were watching Full House and fixating on NSYNC, UC Santa Cruz Arts Division IT Manager, Angie Steele, was crushing on computers. So by the time she was in high school, she’d already been offered her first computing job. “My junior high school computer teacher recommended me for a job there to help the students with their computers,” said Angie. And with that her future was set.

Having grown up in the East Bay town of Antioch, California, with many of her summers spent on the Santa Cruz Boardwalk, when it came time to choose a university, Angie knew that UC Santa Cruz would be at the top of the list. “I actually applied to UCSC to study biology,” said Angie, who ended up earning her degree in Computer Science. “I didn’t even visit the campus after I was accepted because I just knew I was coming here, and I had always loved being in Santa Cruz.”

That was back in 1995 and Angie loved it here so much that she never left! Amazingly, she got her first UCSC job a mere week after she arrived as a freshman, providing IT support at the Physical Plant. Angie really enjoyed working for her supervisor, John Rickard, who became a valuable mentor. “I was responsible for a lot more than a student probably should be,” she laughed, recalling her time there. But it was the beginning of a very successful career that’s still going strong. Now, Angie is an invaluable asset as the Lead Digital Media Specialist for the Film and Digital Media department.

After working at the Physical Plant, Angie not only stayed on campus to pursue her IT work, but continued to live on campus, and even met her husband, John Steele (also a UCSC alum), on campus who is a programmer/analyst for IT Services. And, true to form, the two met via their computer screens. “We met at UCSC via email,” said Angie. “I managed the email server for his department, and when he was hired, his supervisor told me that his last name was spelled “Steel” (missing the last “e”). His first email to me was kindly asking me to correct the spelling of his last name.”

Since those earlier days, the couple has enjoyed not only living on campus but also participating in many worthwhile causes. They are both on the Staff Advisory Board, and John chairs the annual UCSC Holiday Food Drive for Second Harvest Food Bank, with Angie handling the accounting and fund-raising raffle. They also are very involved in the Smith Renaissance Society, an outstanding program that provides academic, personal, social and financial support to UCSC students who haven’t had traditional family support and have had to endure adverse childhood experiences such as neglect, abuse and homelessness.

“My husband and I mentor one student together,” said Angie. “We help the student get through the university process….It’s mostly just being the stable adult in their lives and being that support. We’re on our second mentee – our first student graduated last year – and our current student has a couple of more years.” Angie and John not only mentor, but they are very active board members for the organization, attending many events and helping to fundraise

Called a “life saver” by her colleagues for the outstanding archival system she’s developed for the Music Department recently, Angie is more than willing to put in the extra time and effort it takes to ensure that faculty and student resources are readily available. During the last winter break, she developed a new digital tool that the Music Department could use to archive all of their audio clips and playlists. Before that, the department had relied on the library’s system to do the work, but when it became too expensive to maintain and was consequently cut from the budget, something had to be done to replace it – and quickly.

“So, I knew that we already had this tool we used for video…I thought that maybe we could also use it for audio,” said Angie. “I built a replacement tool, and then brought all of the data out of the old system and into the new tool. The new one is very basic and streamlined, and auto-generates everything for the instructors who want to use it.”

Angie also made sure that it was super easy to use, making it self-service. Unlike the older system where tapes were brought to someone at the library who, in turn, had to then laboriously create customized playlists, with the instructors having no control how the media would be displayed or organized, Angie’s new system allows the faculty to easily upload tracks any way they wish and in any order. They can create playlists and send the links to their students and/or include various links in their syllabus for any given class.

“She’s a real find and we’re so lucky we have her!” says Scotty Brookie, the Arts Division’s IT director, about Angie. “She’s amazing…really responsible… so responsive, reliable, skilled…she’s fabulous!”

Thanks to Angie, Film and Digital Media faculty and students also can organize their films, film clips and archives in the same way. There are excellent resources for converting old media to new. “We have an entire room set aside for old media transitioning. Any format can be digitized and then they can load it up,” said Angie. With between 100 to 160 films being produced every quarter by students, having such an straightforward and efficient archiving system is crucial.

“In the past few years, Angie has made incredible improvements to the functionality of our department and the flow of our curriculum,” said Irene Gustafson, Associate Professor of Film and Digital Media and Department Chair. “Angie is very skilled at finding and developing technological solutions to real world problems and that skill has enhanced the quality of student and faculty research at UCSC. For example, she transitioned the equipment checkout system to an online environment. This was a huge undertaking and dramatically leapt the department forward in our ability to manage our media inventory and provide a good experience for students. She has developed several online systems which allow students to apply for courses online and which allow faculty to review materials in a quick, intuitive and rational way. She has been an invaluable member of our academic community!”

Another major project that Angie has led is the design of the new Animation Lab in the Communications Building. Open since last fall, the lab features, as does the entire Film and Digital Media department, state-of-art equipment and the latest software programs. “My philosophy is don’t recreate the wheel,” said Angie regarding how she thought about the lab design. “I’ve been designing the space and working with the faculty who’s going to be using the space. I’ve also visited other campuses, including the UCLA film program, USC film program, USC animation program, CalArts facilities, UC Santa Barbara, and SF State, so I’m using the available resources.”

What really impressed Angie was the new space developed by USC’s (University of Southern California) School of Journalism. “Their learning space is incredible,” she said. “The level of detail and the technology that they’ve invested in their space is pretty remarkable. And even though it’s specific to journalism, it’s heavy on audio and video.”

The Animation Lab is coming right along and Angie is working on more details, including analyzing how students and faculty will actually use the room, and then what changes to make as more and more students come through and give their feedback.

During the times when Angie actually spends time away from UCSC, you’ll find her most Fridays at the Lucile Packard Children’s Hospital in Palo Alto, volunteering in their library and being a “reading buddy” to the young patients. “I get a list of patients and information about them,” explained Angie. “And then I see if they want to do some reading, play with the iPad or play board games. Sometimes, I wheel them around [in a wheel chair] just to get them out of their rooms. A lot of times we do things other than read books!”

Angie also keeps fit by running and training for half marathons, and enjoys what she refers to as her art – quilt making. But it’s her connection and devotion to the students that she loves the most about being at UC Santa Cruz.