Arts Division IT director and UCSC alumnus, Scotty Brookie, is retiring after 38 years 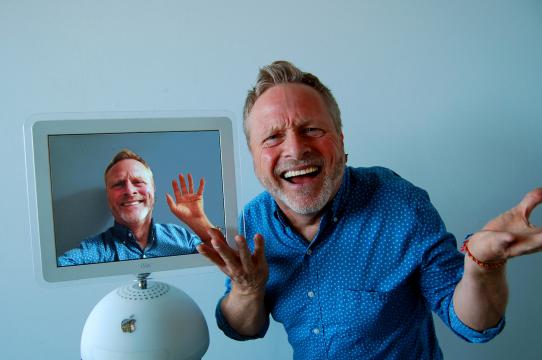 After 38 years… 38.1718 to be exact, the Arts Division’s IT Director/ITS Divisional Liaison to the Arts/Webmaster, Scotty Brookie, a man of many talents, has decided to retire. An alumnus of UC Santa Cruz, Brookie has enjoyed an extensive career at the university which began when he landed a student job as a computer tutor teaching UNIX to faculty and staff, which in turn evolved into a staff position.

“This was right about the time the internet was being created, to put it in perspective,” says Brookie about that time in his life. “I remember computing right before the internet, and I remember how much easier the internet made things. Everybody was pretty excited about it, at least the computer people.”

In 1993, he joined the Arts Division after having spent some time as the assistant director, computing, in social sciences. He loved being part of the Division so much that he never looked back. His own background in arts and music no doubt contributed to his affinity for the arts as well.

His interests continue to cover a wide range of areas…from music, opera and art to gardening, biking, and even journalism.

Growing up in Oakland, California, Brookie was surrounded by a musical family that enjoyed singing, the symphony and the opera. “By far the highlight of my childhood was singing in the San Francisco Boys Chorus and through that in the San Francisco Opera,” recalls Brookie. “We sang in everything from La Boheme to Das Rheingold. For me the very best was at age 13 singing the role of the First Spirit in the Magic Flute in SF Opera….I actually had about 15 seconds of solos. Performing in a repertory chorus and in opera as a boy introduced me early to the rigors, and the magic, of musical performance and theater, and I have loved them ever since.”

But in spite of his outstanding musical talents, he also was drawn to how technical objects worked and found himself mesmerized by the opera’s lighting mechanisms and how much precision and patience it took to get it all just right. He’d be watching as, right off stage, large knife switches connected to various lights were being operated and coordinated with all of the complex cues.

Due to his love of music, he began at UC Santa Cruz as a music and linguistics major, eventually earning his degree in community studies with an emphasis on LGBTQ history. “I thought of becoming an academic in the then, new field of Queer Studies, but I was lured by the siren song of computers, also pretty new,” he says.

Brookie’s impressive achievements have also included writing and reporting that have won him wide-reaching praise. “I’ve done some sort of journalism for a good part of my adult life,” he says. “I think that’s one reason I’ve enjoyed working on the web so much. I worked on the early progressive newspapers in Santa Cruz, and was publisher of a local queer political/literary journal, the Lavender Reader, for 12 years.  A few years ago I got a lifetime achievement award for that work from the state legislature, city and county, which was an honor and also a little embarrassing.”

His other many interests involve gardening and growing his own food, with Brookie emphasizing that he’s a “hardcore gardener”. He also is an avid bicyclist and runner, and even dabbles in sculpting, among other things. “I’m very devoted to my family and friends. I have season tickets to the opera — surprise. I’m a shy pianist.”

Working at UCSC for so long, he has really appreciated collaborating with his colleagues in the Arts Division and IT who have nourished his creative and nerdy sides, and also being part of what he deems the critical mission of higher education and research in a “breathtakingly beautiful location that never ceases to astonish me”. He knows he’ll miss not only the comfort that comes from having a routine, but his coworkers as well.

“I’ll miss the people the most — smart, creative, fun, engaged people,” he says. “In particular, my staff — Colleen, Dung, Edward, Tristan, and Angie, who is just leaving, and Anthony, who is just starting — are fabulous. I’ve worked the longest — 24 years! — side by side with Dung, one of the most cheerful, positive, competent people you can imagine — I feel very blessed for that.”

As Brookie gets ready for the next fantastic phase in his life, he’s looking forward to more of what he loves best. “More art, more music, more gardening, more biking! More time with my wonderful partner, Andrew Purchin….keep seeing more of the world and my friends all over.  Also try to, you know, save democracy a bit.”