Institute of the Arts and Sciences - Opening Conversations 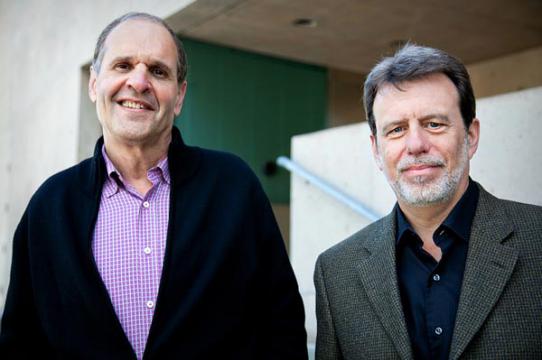 In what turned out to be a lively brainstorming session Arts Dean David Yager and new Director John Weber [pictured] facilitated a day-long brainstorming session to help shape the new Institute of the Arts and Sciences on the UCSC campus. From its robust opening remarks by the Institute's Founding Director John Weber, through its central explorations of ideas, vocabularies, and visions for the projected site, to a concluding inquiry into the role of the academy in collaborative practice, last week's 3 Conversations announced a seriousness of commitment to the proposed Institute for the Arts and Sciences.

Planned by the recently-recruited Weber along with Arts Dean David Yager, the day-long "conversation" brought together top thinkers, educators, and designers from fields both relevant and provocative. Opening remarks by Walter Hood, Professor of Landscape Architecture and Environmental Design at UC Berkeley, set the tone. Hood described his own vision for such recent projects as work on the site of the DeYoung, the ecology of a Berkeley watershed corridor, and a hillside museum site in Wyoming. Addressing the need to blend culture and place, Hood contended that the stories that remain from the past are moments that need re-invention, and incorporation. "I want people to see the world all over again," by relating to the landscape, the surrounding environment— "the ecology of living in a place."

David Yager commented at the opening of the day that the Institute "needs to be a tangible and compelling place, siutuated within an active community." He reiterated his vision that 'inclusiveness' is a dominant theme of ideas that will guide the shape of the future Institute of the Arts and Sciences. "How can we have the most impact?"

"Today is our real kickoff of thinking about what this project is going to be and how to engage the broaded community," Yager reiterated. The audience of five dozen attendees from across the campus, and the California museum community, also included arts curators and leaders from the Santa Cruz community. "We want to provoke, create, understand," Yager reaffirmed, "and we want to do something that hasn't been done."

Professor of History of Consciousness emeritus James Clifford, spoke eloquently about the extraordinary site that is the UCSC campus and its layers of socio-environmental history. He noted that the concept of the institute, like life, "does not naturally fall into disciplinary forms." The UCSC campus, in its original interdisciplinary configuration, evokes a feeling of specialness.  "It is a utopian space, a site which continues to inspire."

From the San Francisco Exploratorium, curator Marina McDougall spoke of her professional focus on providing the visitor with "experiences that ignite curiosity.  We benefit from drawing upon the full panoply of disciplines," she said. "The world arrives to us whole, and the best and new ideas grow at the interstises of disciplines."

Adding fresh perspectives to the theme of "interdisciplinarity" were UCSC Professor of Astronomy Enrico Ramirez-Ruiz whose OpenLab involves close collaboration with Art Professor Jennifer Parker and a cohort of their arts and sciences graduate students. "The synergy between artists and scientists," Ramirez-Ruiz said, "helped to completely transform the problems we scientists were looking at." Kim Yasuda, co-director of the UC Institute for Research in the Arts offered examples of public art projects she led in which student artists collaborated with members of the community, modeling yet another aspect of "interdiciplinarity."

After lunch the "conversation" continued into focussed discussions of architecture and art curation, guided by participants including Portland State University artist Harrell Fletcher and Stanford's Cantor Arts Center Director Connie Wolf. The afternoon closed with a conversation about how the academy must present itself for present and future audiences, including remarks by History of Art and Visual Culture professor Elisabeth Cameron, Kristy Edmunds from the Center for the Art of Performance at UCLA and Lawrence Rinder, director of the UC Berkeley Art Museum.

The conversation about the place, shape, and vision in which the Institute for the Arts and Sciences at UCSC will unfold has just begun.  But it will continue in many new forms over the coming months and years.