For Anna Friz Radio Silence is Not an Option 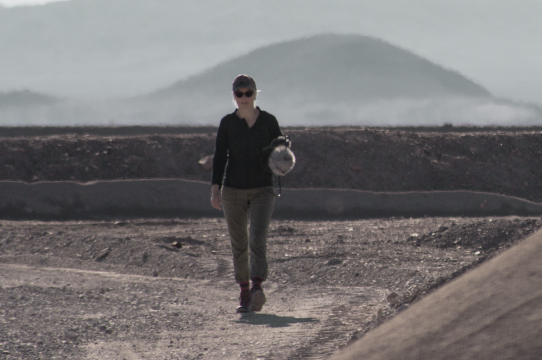 Advised by her teachers when she was a child that she didn’t have what it took to be an artist, Anna Friz took matters into her own hands and decided to do DIY art-related projects that later included street performance, cabaret and drag shows. She even busked for spare change, playing the harmonica when she was broke and traveling the Yukon, and joined a clown band after learning how to play the accordion.

But when it came time to attend college, Friz chose to study Women’s Studies at the University of British Columbia where she earned her B.A. and then went on to acquire an M.A. in media studies at Concordia University in Montreal. From there, she earned her Ph.D. in the Joint Graduate Program in Communication and Culture from York University, Toronto, her dissertation being, "The Radio of the Future Redux: Rethinking Transmission Through Experiments in Radio Art." Friz also partook in a post-doctoral fellowship in the Department of Sound at the School of the Art Institute of Chicago.

“I never went to art school or music school as an undergraduate or graduate student, instead getting graduate degrees in the social sciences, particularly a research-creation or critical practice Ph.D. in communications and cultural studies,” says Friz. “I used radio and transmission art performances and installations as methods for rethinking radio history and wireless entanglements of humans, technology and environment. 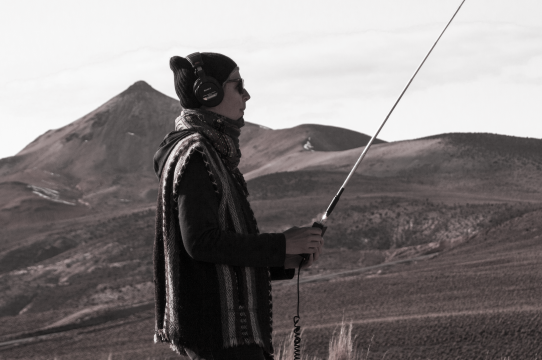 “Along the way I branched out into making live sound for devised theater and contemporary dance, to scoring multi-channel film installations, and to creating permanent outdoor installations. Since coming to UC Santa Cruz, I have also started creating and directing my own film projects, from multi-channel audiovisual installations to short docs and films.”

Friz joined UC Santa Cruz’s Film and Digital Media Department in 2015 as an associate professor and she was excited to not only teach the practice and theory of sound, but wanted to teach at a public university since it perfectly fit her ethics as an academic. She has recently earned tenure.

“Thinking and making together with students remains the best part of my job,” says Friz. “At the undergraduate level I most often teach production students, and I really appreciate the candor and care that our students bring to their creative work and the consideration they offer one another in giving critical feedback…Especially during the pandemic, I have been really impressed by the quality of work that students have made under enormous stress and uncertainty…I love being around that generative energy, and it pushes me to bring all my experience to the table.”

Growing up in Vancouver, B.C., alongside her brother and with parents who immigrated to Canada from the United States and Denmark, Friz grew up speaking Danish and spent summers visiting Denmark where she found the culture and climate to have a deep influence. Her mother is a weaver and textile craftsperson with a background as a lab technician and her father was a professor of anatomy, but no one in her family had an interest in sound, at least not in the way that Friz has developed it. She says that being around her mother, who used to have the radio on most of the day for company, no doubt had an impact on her own relationship to sound, and as she got older, Friz became a teenager obsessed with all styles of music, taking advantage of Vancouver’s emerging music scene filled with punk, folk and experimental sounds.

“Late night radio shows like Brave New Waves and Nightlines on CBC radio were really instrumental in exposing me to all sorts of sounds, and when a friend of mine’s older brother became program director at the local university radio station, I knew I wanted to do that eventually as well,” remembers Friz. She found herself volunteering at a local community radio station and started producing a feminist talk show and a variety of music shows, which also led to her honing in her technical skills.

“At some point, I learned that radio and sound art existed as categories of media art, and that I was already a practicing radio artist by definition,” says Friz. “In the late 1990s I took a workshop to build a small FM transmitter based on Japanese media theorist and artist Tetsuo Kogawa’s mini-FM design, which allowed me to pull radio completely out of the studio and into public spaces in new ways. Radio brought my diverse interests in performance (particularly spoken word), experimental music, politics and conceptual art together.”

Citing Laurie Anderson and David Wojnarowicz as longtime inspirations, Friz’s audiovisual work  has been influenced by the photography of Jungjin Lee and Yutaka Takanashi, and she’s planning to produce sound works based on Takanashi’s photographs from the 1960s in the near future. “Looking at their work immediately provokes sounds for me,” she says.

Friz is also working on a number of substantial projects, including We Build Ruins, a series of media art works and film installations expressively considering mining and industrial corridors in the high altitude deserts in northern Chile, and projects concerning radio beacons, air traffic control, and military monitoring vs. citizen listening. She’ll be returning to Chile in spring 2022 while on sabbatical to finish filming and recording.

Other projects include Elemental Radio, a 22-hour solo radio art work (a composition specifically for radio broadcast) commissioned for Esch2022 as part of European Capital of Culture in Luxembourg in 2022. “Elemental Radio will be a highly detailed composition with an attendant ear to the duration of real-time relations and mediations unfolding—a composition created primarily by working with long-form field recordings made within the slender fog zone of the Bay Area between Santa Cruz and Sonoma counties,” explains Friz. “Sounds range from foghorns to animal communications to the BART to ship-to-shore radio communications to sound environments in the coastal burn scars.”

She’s also collaborating with dance professor Cynthia Ling Lee (UCSC Performance Play and Design) for a new work on body, breath and illness; and a permanent outdoor sound installation in collaboration with Absolute Value of Noise/Peter Courtemanche entitled Solar Radio, which will be installed at Wave Farm in late summer 2022.

With so much going on in her life, Friz still takes time to swim, hike, cook, attend concerts and break out in impromptu dancing. She enjoys knitting and weaving, and is creating multi-layer “earth suits” for We Build Ruins made from random materials found in the desert.

“The pandemic made some of that less possible, but always, art is what I do both in earnest and for fun,” she says.