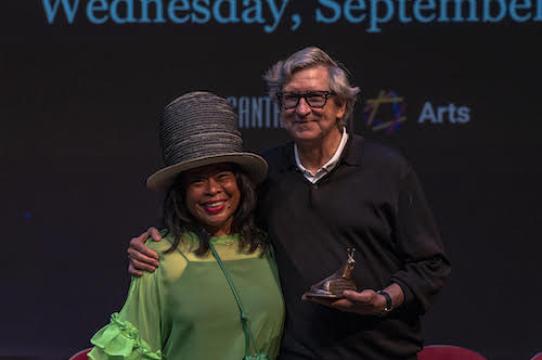 UC Santa Cruz alumnus Rick Carter, a two-time Academy Award winning film production designer and art director, returned to his alma mater on September 28th to receive the Distinguished Banana Slug Award at the second annual Arts Convocation, a ceremony established by Arts Dean Celine Parreñas Shimizu to recognize and reconnect with distinguished alumni and communicate her vision for the Arts at UCSC to assembled students, families, faculty, and staff at the start of the academic year.

Carter (B.A., Art, ‘74) received an Oscar in 2013 for his haunting production design for Steven Spielberg’s critically acclaimed cinematic masterwork Lincoln as well as for art direction on James Cameron’s Avatar. He was also nominated for his work on Forrest Gump and War Horse and has numerous nominations of other awards for his work on such films as Amistad and A.I. Artificial Intelligence. Other notable films include Star Wars: The Rise of Skywalker, Jurassic Park, and Back to the Future Part II and Part III. Carter’s student days at UCSC were spent painting, something he still avidly pursues.

In a lively, onstage, multigenerational conversation with undergraduate student of Art Becky Diaz and Music Professor and Associate Dean of Diversity, Equity and Inclusion Karlton Hestor, Carter candidly reflected on the profound journey of personal and creative discovery he experienced as a student at UCSC and its enduring influence on his artistic process and the course of his career. Carter underscored the importance of embracing the new and the untried. “While I was at UCSC, I went in multiple directions at the same time. Even though it was confusing, I began to understand that in this fragmentation, I was learning about what I wanted to bring out into the world. It wasn’t refined yet, but my experiences were like little grains of sand that went into my consciousness like an oyster, turning them into pearls, that I return to now. Don’t be fearful of having too many versions of yourself. UCSC aids and abets that! Try things on!” he said. Asked by Diaz if there were challenges transitioning from painting to art direction, Carter responded, “I didn’t know the skills yet, but I knew about the process. I know what it is to begin with a blank canvas. You learn the beginnings of your process here at UCSC.”

Carter conjectured that the painting-based art practice he developed at UCSC likely contributed to his lifelong, working relationship with Steven Spielberg–one that began with The Goonies in 1985. In a congratulatory video shown at the Convocation, Spielberg called Carter, “the artist in residence of my career.” Filmmaker J.J. Abrams likewise wished his colleague well, saying, “You are a real dreamer with the ability to make connections that transform and enlighten.”

Presenting Carter with a bronze banana slug statuette created and cast at UCSC’s foundry by J. Gaston, Shimizu noted that Carter’s career, “...shows us how to create worlds previously unseen, unheard, unfelt.” She expanded on this sentiment in her address as she encouraged students to, “...imagine new institutions that do not yet exist.”

Shimizu has championed diversity, equity, and inclusion in her work at UCSC and rallied students at the event to embrace the art of change. “Only by feeling for each other, caring about all of our rights, will we actualize a world where we remake social norms of exclusion and inequality,” she said. “And through your learning, you will become artists, scholars, and more, convincing others by touching them so deeply that the world must be better, that the mind must become decolonized, new sounds must be made, and new imaginations unleashed.”

In opening remarks, Lori Kletzer, Campus Provost and Executive Vice Chancellor, noted Shimizu’s bold leadership on advancing equity in the Arts Division and the accomplishments of her first year. “In as short as a year, Dean Celine, with her steadfast and never wavering commitment to diversity, equity and inclusion, has developed a strong infrastructure that will transform the Arts Division and will be the absolute centerplace of leading the university towards the same goals.” Kletzer specifically cited major grants Shimizu secured to advance faculty diversity and to forge new pathways to the professoriate. Kletzer emphasized, “These efforts will make deep and sustainable differences and embody our commitment to a faculty and student body that looks like the world we live in.”

Guest of honor Carter, who traveled the globe extensively before arriving at UCSC, also emphasized the importance of diversity to his work and the many portraits he paints of the faces he encountered along the way. “These connections with other people are also the grains of sand,” he said. “I’ve spent a lifetime developing these faces. I don’t know what my world would be without them.”

Diaz and Hestor engaged Carter in a deeper conversation about diversity, equity, and inclusion during their onstage chat, with Diaz wondering how she would fit in on a set as a Latina. Carter, who has unusual vision issues, replied, “Sometimes those things that you look at as being an impediment can actually be the thing that makes you not just different, but able to answer something in a new way.” He cited as an example his inability to see in 3D while working on Avatar and how, after initially assuming he shouldn’t participate in those creative discussions, he came to understand that he could contribute significantly by bringing a different perspective to the table.

Shimizu noted that she first met Carter earlier this year at the El Segundo Museum of Art where he is currently working with a diverse group of next generation artists on an ongoing, collaborative exhibition. “They are collaborating across generations and across difference to create new unifying grammars, structures, and vocabularies of creative expression. The project captures so well the multigenerational conversations beyond the written and spoken that we engage in here at UCSC so passionately in ways Rick Carter truly exemplifies.”

The students in attendance were thrilled to have the opportunity to ask Carter questions at the end of the Convocation, as many of his personal reflections about developing his art process resonated deeply. A number stayed afterwards to talk further with him, and Carter enthusiastically obliged, staying long into the day to speak with each individually and pose for numerous selfies.

See more photos from the Convocation on our Flickr album.