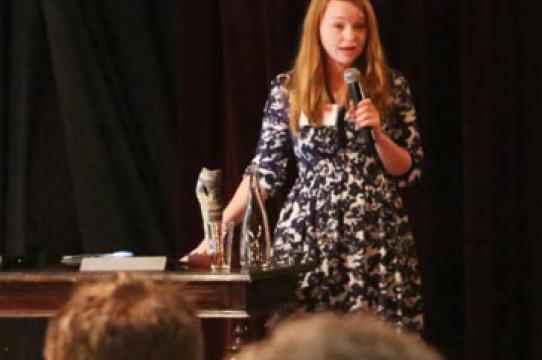 Renewing the connection from campus to professional life, a high profile group of UCSC Arts alums working in the entertainment and film industry gathered last month at West Hollywood's Soho House. The festive event rekindled close encounters among fellow industry alums, as well as Arts Dean David Yager and some favorite film and media professors. "It is always wonderful to see the accomplishments of our alumni," Yager said. "The DNA of UC Santa Cruz is a powerful link between our earliest and most recent alumni."

The annual gathering, Bridging the Gap, showcased a brief awards ceremony. Lionsgate Chairman Kevin Beggs received one of the inaugural Arts Dean's Excellence Awards. "Santa Cruz has great content but not great distribution," Beggs noted of the outstanding graduates of arts programs needing more visibility. "We need to get the word out, and David's vision is helping us do that."

Executive Producer Brannon Braga was also a Dean's Excellence Award recipient. Obviously thrilled with this latest honor, Braga admitted how fortunate he was to have seen an internship ad on one of the film department's bulletin boards many years ago. That internship turned into a 14-year job with the Star Trek franchise, he observed. Braga said he wanted to make sure that he gives back in that same way so that others students have an opportunity to succeed.

The Film & Digital Media Prestigious Alumni Award went to Sarah Schechter, senior VP for production at Warner Brothers. Schechter (shown above) told the gathering how important it was to have watched and analyzed so many films at school, so important that now that she is advising directors on their own work.

"There were many alums in the room that we had been trying to track down for several years who were so excited to be there," recalled Arts Development Director Lesley Brander. "I have already received emails from alums nominating other alums for the next round of awards. Several prospective parents attended as well as parents of our current arts students and they all shared stories about how happy their children were during their time at our campus."

The Eli Hollander Aspiring Filmmaker Award was unveiled and a stipend was awarded by emeritus Eli Hollander himself to Shawheen Keyani.  Three minutes of Keyani's student piece COYOTE was screened for the audience along with a Soc Doc piece by Melissa Koch entitled The Infamous T. The student efforts were so impressive that the filmmakers have already been approached about expanding their work.

Presentations were sandwiched between receptions, screenings, food and the sort of conversation that helps to re-kindle old alliances between professors, filmmakers, and graduates of UCSC. The entire evening was, in Brander's estimation, "a gigantic success!"

Arts Development Director Brander is hopeful that this month's New York segment of the Bridging the Gap event will "reopen the door back to campus, and generate a dialogue about reconnecting and partnering to further the needs of our alums as well as the Arts Division and the university as a whole. We want to achieve in New York what we have done in Los Angeles—Slug pride for the Arts!"