Cláudio Bueno has committed his life to working for social, cognitive and environmental justice

Acting Professor of Art, Bueno’s work has been featured in exhibitions throughout the world 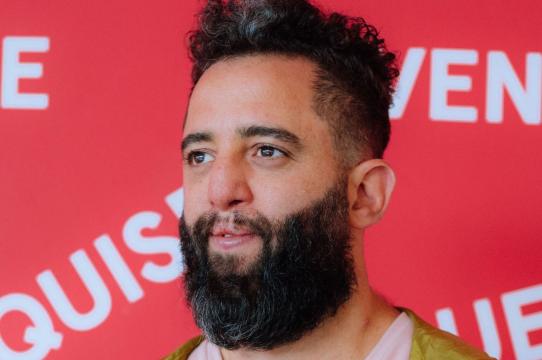 Cláudio Bueno, a new Acting Professor of Art who recently arrived from Brazil, sees the university as a place where can collaborate on a world-changing level.

“As a professor, I want to add to the importance of academic activity as a design and social transformation process, shaping ways of thinking, imagining and living through dialogic and political-aesthetical propositions in collaboration with students,” he said.

Bueno, an artist, curator and a designer,  grew up in the Vila Nova York neighborhood of São Paulo,  a mostly low-income community on the city’s outskirts, about 25 km from downtown.

He has no complaints about his childhood, which was a happy one. The son of a metalworker and a seamstress, he grew up with two older sisters and was surrounded by kind people inside and outside the home. They learned “to live with what is enough” and “to consider what we really need for a dignified life. “Sufficiency seems to me a keyword even today,” he said.

Later, as an adult, he realized it was time for a change. “I needed to move downtown to live more fully my sexuality and my affective relationships outside the context of LGBTQI+phobic oppression, which is still very present throughout society, especially in the masculinities of the suburbs,” he said.

Bueno earned a doctoral degree in visual arts from the University of São Paulo and committed his life to working for social, cognitive and environmental justice.

“It is through the art field, culture and education, in interaction with other disciplines (economics, technology, biology, social studies, environmental studies…), that I believe it is possible to fabulate paths that find some reconciliation and reconnection with the Earth, with other beings, and with our own personal and collective histories,” he said.

Bueno describes himself as someone who can be blunt in speaking his mind. “Sometimes I am sharp, and people perceive my remarks as cutting,” he said. “I say unexpected things. I try to reach problems where they grew up, on the roots - I don’t always succeed. People usually avoid radically accessing problems.”

At the same time, his greatest joy is spending time with people. “Being among friends is the greatest pleasure I find - either for fun or for the fabulation of something jointly.”

He is a member of the groups Explode! Platform (which “promotes and develops research and experimentation around practices that discuss the body and its intersections of class, race, gender, sexuality and no-normative possibilities”),Intervalo-Escola (an experimental school that “maps, develops and experiences ways of learning in/against/on/from/ the art field”) and O grupo inteiro (“which seeks to multiply paths and establish conditions for public dialogues through political-aesthetic propositions”).

He has worked on a variety of projects involving art, design, education, activism, architecture and technology.

Bueno’s work has been featured in exhibitions throughout the world. He has worked with the Hessel Museum at the Center for Curatorial Studies at Bard College in New York, the Chicago Architecture Biennial,  City University of New York; the Delfina Foundation, Central Saint Martins and Whitechapel Gallery, in London; Prix Ars Electronica in Austria; Festival de Artes Electronicas Transitio_MX in Mexico; Humboldtt-Universität in Germany; the São Paulo Biennial in Brazil and Museu de Arte de São Paulo (MASP); Pro-Helvetia/Far in Switzerland; Het Nieuwe Instituut in the Netherlands; Ujazdowski Castle for Contemporary Arts in Poland and the University of Cape Town in South Africa Among others.

His articles have been published by Mousse Publishing, Terremoto.mx and Fundação Bienal de São Paulo.

Bueno mostly recently worked as director of participation and culture at São Paulo’s Tomie Ohtake Institute, known for its unusual curved architecture. Ohtake was a Japanese-Brazilian artist revered for her paintings, prints and sculptures.

From 2019-2021, he was a visiting professor at the graduate program of the School of Arts at FAAP (Fundação Armando Álvarez Penteado), one of the most prestigious academic institutions in Brazil.

Earlier, he co-curated the exhibition “Fields of Invisibility,” which was a “reflection on the global technological infrastructures and its modes of operation regarding the dynamics of life and the Earth.”

Bueno has also been developing digital platforms for art and educational institutions for the last 20 years.

“I am inspired by the Brazilian social reality, in all its aspects, of joy, invention, and also revolt,” he said. “From this perspective, I can produce a reading of some systems of oppression and violence in the world. This reality nourishes and guides my artistic and life decisions- whether in search of a more dignified life, in appreciation of the diversity of ways of living, or in inventing new forms of existence that escape the hegemonic ones.”

But he realizes it’s not easy to step out on your own path. “In the field of artistic languages, also associated with other areas of knowledge, I see the fabulation and the practice of non-hegemonic forms of lie- which are situated outside the colonial registers of domination, control, oppression, accumulation and capital- as a great challenge,” he said. “Such an imagination is not possible to perform alone but must consider multiple responses/paths. To this end, the challenge becomes the creation of platforms, groups and collectivities fostering conditions and strength to mobilize and sustain an imaginary and a practice of complex conviviality between the Earth, beings, knowledge, systems, infrastructure, and technologies.”

After a lifetime spent in Brazil, he is glad to be able to be part of the UC Santa Cruz community. “I believe that my artistic and academic career can gain even more strength alongside my colleagues at UCSC and the university’s research support,” he said. “The appreciation of a teacher-researcher was the main factor in my decision - with resources that make it possible.”

He is also excited to work with UCSC’s new master of fine arts degree program in Environmental Art and Social Practice. “The foundations of the program point to many of my current and future interests and all my work over the last few years, primarily related to social, environmental and cognitive justice, mostly between São Paulo and the state of Amazonas.”