Congratulations to the 2019 Arts Division Deans' and Chancellor's Award winners! 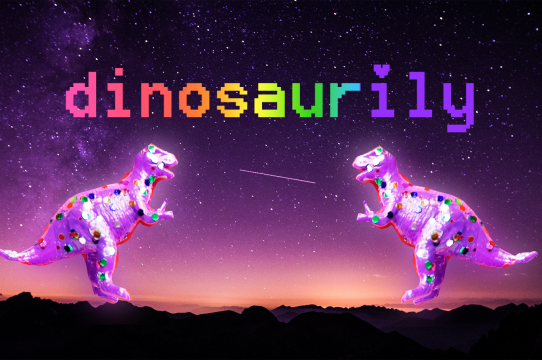 The UC Santa Cruz Arts Division was very proud to present the following, very talented students with this year’s awards. Congratulations to all of our awardees! 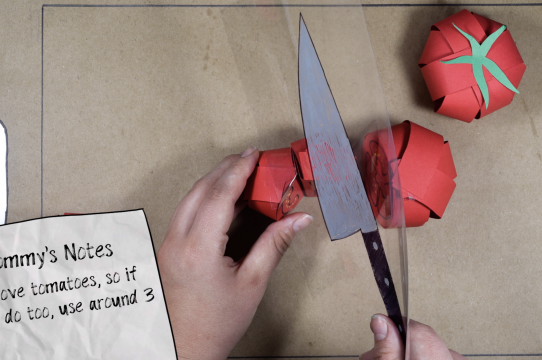 - Project: Film 179A: Stop Motion Animation:
Anak, how are you? (My child, how are you?)
By Jelica Ross Alcarmen Hipolito, Sabrina Anne Ilumin, Maybelle Michele Alvarez, Angie Paola Morales Molina
This project was based on an assignment that required the animation to be a portrait of someone. The group’s stop motion animation features Jelica Hipolito's mother, and highlights her love for her daughter when she is sick. Specifically, it expresses her mother's tender care through relaying instructions on making food. In the film, Mrs. Hipolito describes her recipe for sinigang, a traditional Filipino soup. Her instructions are mix of practical steps (e.g: “Cut the tomatoes into fourths and add it to the pot of boiling water”), and advice (e.g: “Take care of yourself, anak. Make sure to update me on how you’re feeling”). With voiceovers by Mrs. Hipolito and Jelica, the film conveys the close relationship between mother and daughter. The film also highlights Mrs. Hipolito as an affectionate character by utilizing both practical instruction and motherly sayings.

Anak, how are you? (My child, how are you?) utilizes a mix of paper cut out and transparency sheets for the majority of the film, while also combining the use of real life footage and rotoscoping of that footage.

- Project: HAVC 100A Research Paper: Refining Tastes
By Ava Lizette Kristy
The question of visualizing narratives of slavery has been contested, with many believing addressing these narratives through stereotypes perpetuates racism. However, these critiques eliminate space for humanizing the lived experiences of enslaved people. In her paper, Kristy addresses how installation artist Kara Walker’s A Subtlety uncovers the historical roots of many pervasive stereotypes that continue to affect African Americans in the present. Specifically, she acknowledges how economic motivations for slavery bolster and maintain racist notions. In conclusion, Kristy states that Walker’s A Subtlety works against historical erasure that prioritizes narratives of progress in place of acknowledging ongoing racial discrimination in the United States.

- Project:Film + Digital Media Critical Studies Thesis: John Hughes, Teenagers, and the Corporate American Dream
By Nicholette Lindsay
John Hughes's memorable 1980's teen films are considered by many to be "classics." With an aesthetic emblematic of the time, his films also told young audiences to buy into a conservative agenda, sought strong, powerful depictions of men and, subsequently, poor depictions of women. In Lindsay’s investigation of Pretty in Pink and Ferris Bueller's Day Off (both 1986), she analyzed the ways in which Hughes's text functioned to keep women at home and out of the workplace, and at the same time promoted the masculinity of corporate idealism. Because his films were so popular, many of the tropes incentivized by John Hughes and the Reagan administration, such as the makeover, were re-used in later teen movies in the late 1990's and early 2000's. Not only does this result in portrayals of teenaged girls and young women unable to get ahead by way of intellect alone, but these films and their successors also boosted adulation for the “con man” so familiar to us today.

- Project: HAVC 100A Research Paper: Our World in Wilson's Hands
By Samwell Tarciano Gervacio
The work, "Atlas," 1995, by Fred Wilson, depicts a racist “happy black servant” figurine holding a globe configured as a symbol of the African diaspora by using push-pins and flags to mark major populations of people of African descent around the world. Through an analysis of visual elements and historical socio-political contexts expressed in "Atlas," Gervacio investigated how Wilson works with theoretical concepts involving race and colonization. He argued that “Atlas” discusses specific theories explained by Frantz Fanon concerning the construction of narratives by colonial powers, the violence projected from slavery onto the present, and the ultimate struggle by the colonized to liberation. Gervacio supported his argument by referring to Fanon’s The Fact of Blackness and On National Culture, in relation to elements of the work like symbolic placement and inclusion of historical objects, and by putting "Altas" in conversation with Wilson’s entrance to the U.S Pavilion from the 2003 Venice Biennale featuring two large African slaves transferred from a tomb to hold Neoclassical architecture labeled with “STATI UNITI D”AMERICA” (“United States of America”). 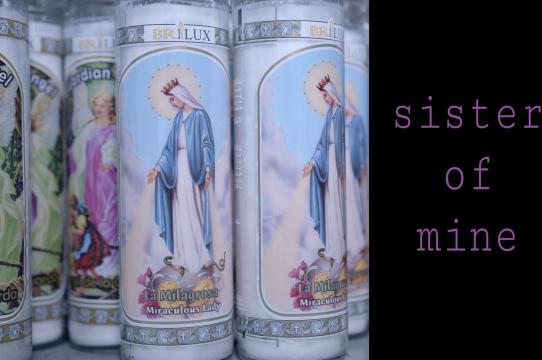 This ten-minute film explores multiple themes that underlie a family’s generational trauma.Two Latinx siblings, Alejandra and Anthony, lose their sister (Rebecca) to suicide. As a coping mechanism, the younger sister, Alejandra, compartmentalizes her sister’s death as a “tiger attack” in order to assimilate the trauma of such an absence. Since both siblings were witness to her death, they are ordered by their case manager to see a therapist. Although the two low-income teenagers anticipate the systemized therapy, conversations between them and the therapist weigh heavy on their souls. The therapist digests stories depicting the tiger and a “supposed” missing sister while attempting to understand the young sister's point of view. The siblings decide to take their trauma into their own hands by searching for their sister. On a quest, they find material items reminding them of Rebecca’s liveliness: Mexican hot sauce, pan dulce, and little ofrienda figurines. However, as they continue therapy (and their own search), tensions rise between the therapist and the teenagers. Their search comes to a stopping point when a spiritual connection occurs between their sister (Rebecca’s soul), and prayers that erupt during therapy. Sister of Mine in sum is a narrative not often told. It is a theme of Mexican-American youth as they experience the traumatic effects of past events that indefinitely will shape their future. It is a narrative about grief, growth, and acceptance, as much as it details Mexican pride, culture, and self-love. 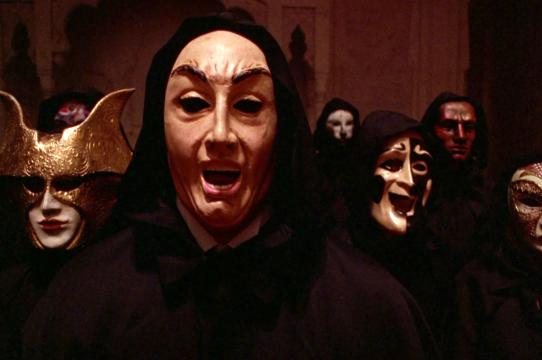 - Project: Film 195 - Senior Thesis: The Duality of the Face in Cinema: From Ubiquity to Obscurity
By Rachel Aisha Abrahams
Abrahams explored the concept of “facelessness,” or what she has dubbed the obscured face in cinema. In narrative film and critical film analyses, so much emphasis is put on the face and its meaning and she was curious as to what meaning could be derived from characters without human faces, whether their faces be hidden or removed from the image altogether. What role does the face play in one’s understanding of and connection with a character/narrative? What meaning (if any) is lost when the face cannot be seen, and thus read? How are these obscured faces made accessible to the spectator? By borrowing from notable film theorists such as Christian Metz, Béla Balázs, and Mary Ann Doane, Abrahams’s goal was to analyze the face's progression from ubiquity to obscurity over time while connecting the obscured face in cinema to concepts of anonymity and identity. In an era of mass media and hyper-visibility, the obscured face is both dehumanizing and empowering.

- Project: HAVC 191U - City on a Hill: The Architecture of the Campus: The Myth of Leisure: Bean Bag Chairs and Corporate Tech Campuses
By Daniel Scott Fisher
This thesis paper is an analysis of modern corporate tech campuses' architectures and interior design through a sociological history of the bean bag chair. Such campuses are viewed in the public consciousness as fun, attractive, and idyllic landscapes that are more playground than workplace, which the bean bag chair is an essential part of. But this image of modern tech offices does nothing more than hide these companies’ efforts to optimize productivity from their employees in existing systems of capitalist labor exploitation. The bean bag chair has had a similar history, first created among the radical Italian design movement of the ‘60s and ‘70s with the intention of shifting social configurations, but was then prey to corporate co-opting that has diluted and hidden the original use values of the chair. 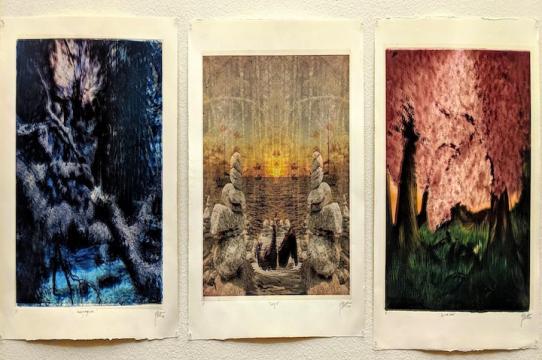 - Project: Art 168: Photo Based Printmaking: Worlds: An Exploration of the Self
By Zoe Joy Elliott
In this physical world, meaning the world we live in currently, we try to escape to other places in dreams (daydreams and whatnot) for sanctuary in times of vulnerability. In her series of three photo intaglio prints, Elliott conveys how we become disconnected to the world around us in order to escape our own minds and reality; thus, losing ourselves in the process. The titles of her images correspond to the journey of losing one's self. "Sinking Up" is a play on words because when we connect to technology, we sync up to the device. In this image, the figure is sinking up from the surface where she lays to the world she's going to explore. "Wandering through Shadows..." denotes a darkness about the exploration that's happening, whether it be internal (self) or external as shown in the print. "...Deep in the Meadow" illustrates a peace, as meadows are usually seen as buccolic and calming, but they can also be seen as "middle of nowhere" and places of uncertainty. In this case, Elliot felt as if the meadow depicts a middle of nowhere and a space of uncertainty for both the viewer and figure within the piece.

- Project: HAVC 195: Senior Thesis: Fabrications, Articulations, Activations: Creating Vā Through Intentional Juxtapositions & Decolonizing the ‘Dusky Maiden’
By Alexandra Simpson Hiatt
This essay examines how two contemporary Pacific Islander artists of Sāmoan descent, Yuki Kihara and Rosanna Raymond, use their decolonizing works to critique colonial representations in 19th century photography of Pacific Islander women as "dusky maidens." Hiatt analyzes how they utilize the Polynesian spatio-temporal concept of vā, the connecting space between things, to create a dialogue between history, the present, identities, and spaces. This essay addresses how vā is activated and embodied through the use of the artists’ own bodies within their respective works, as well as through the use of intentional juxtapositions: a creative tool which consciously uses recognizable iconography from different times, places, and peoples, and puts them together in visual and conceptual dialogue. My intent is to provide a platform to discuss how these two case studies address the powerful role of images in colonial history and their ongoing impact on Polynesian peoples, and how Kihara and Raymond use art and creative practice to imagine a decolonial future.

- Project: ARTG 129: Special Topics in Game Design: Speculative Futures: Games for A Different World: dinosaurily
By Joyce Wei-Shin Lin and Jacob A. Swanson
dinosaurilyis a 2D digital single-player, queer dinosaur game about found family and affection where the player can hug other dinosaurs, plant flowers and stickers, and freely explore different dimensions of space/time. Lin and Swanson want queer players to have a space where they can fulfill a queer dream through play, which may not line up with their reality. In this game, one plays as a dinosaur on a night out on the town and finds other dinosaurs who become the player’s new family, and can express freely and celebrate life. When the player hugs another dinosaur, they change into them. This represents the changing of perspective when getting to know someone intimately whether platonically or romantically, literally stepping into the other’s shoes. Visually, to convey a sense of nostalgia and celebration, Lin and Swanson created their own version of a cyberpunk aesthetic. From their research, they took inspiration from Teddy Pozo, using chromatic aberration as a form of queer and subjective "haptic visuality”. Another inspiration was Avery Mcdaldno’s idea of how exploring voids in queer games can be fruitful. Exploring voids also ties in with their theme of self-expression as a way of forming identity.