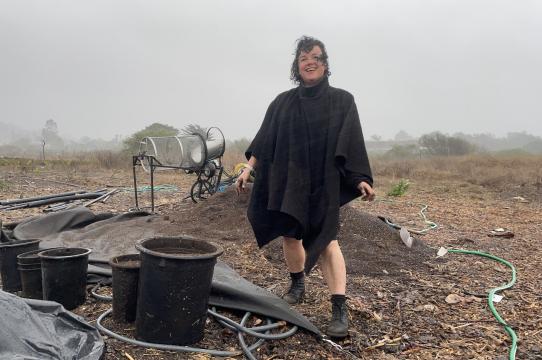 Loss and grief have turned out to be uncanny inspirations for artist and student Aja Bond, who is currently in her junior year, working towards earning a B.A. in art at UC Santa Cruz. Originally from Okanagan Valley, traditional Okanagan Territory, in the interior of British Columbia, Canada, Bond lived in Vancouver, British Columbia before moving to Santa Cruz in 2016. Her partner had decided to enter the PhD program in the History of Consciousness at UCSC, so she came along, not really knowing what to expect.

“While I was waiting for my green card, I audited a grad seminar with Professor T.J. Demos in the History of Art and Visual Culture department called Decolonizing Nature,” she recalls. “It was the most intellectually challenged and engaged I had ever been and it connected me to the really rich community of interdisciplinary scholarship here at UCSC.” 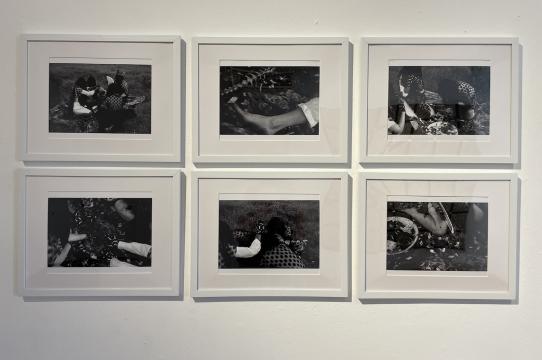 She found that the class spoke to her passions around art, ecology and decolonization and then when she discovered the Art Department’s new MFA in social practice and environmental art, that confirmed that she had found the perfect place for her to study. “I joined the Center for Creative Ecology reading group, started attending events put on by the Institute of Arts and Sciences, and enrolled in Cabrillo College so that I could transfer to UCSC to do my BA as a returning student,” she says.

Bond’s show at the Sesnon Underground, All Day I Dream About Soil is a reflection of the series of devastating losses she has endured over the last few years. In the exhibition, she refers to composting and how the process comforts her. “Though it may seem morbid, I actually feel much more alive when I am grounded in an ongoing awareness of death and when I have tools and practices that allow me to move through the grief of the seemingly unending losses we are sustaining,” she explains. 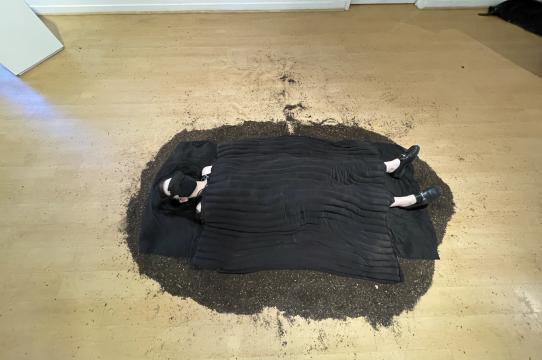 Along with stunning photographs, the center of the show features a large space filled with rich soil, topped by a cloth, where participants can lay down and feel the soft earth beneath them. There’s also a cozy weighted blanket and eye shades that Bond handcrafted, so that a person can be tucked in and feel safe and warm.

“I have also become attuned to the ecological and social losses that we are collectively experiencing in this unprecedented time,” says Bond. “Through it all, I have found deep comfort in the simple process of composting, which was one of the only things I cared about in the depths of my personal grief. It allowed me to have an embodied relationship with the processes of death, decomposition and rebirth, and helped me understand in a more holistic way the role that death plays in ecological processes, especially in the creation of topsoil.” 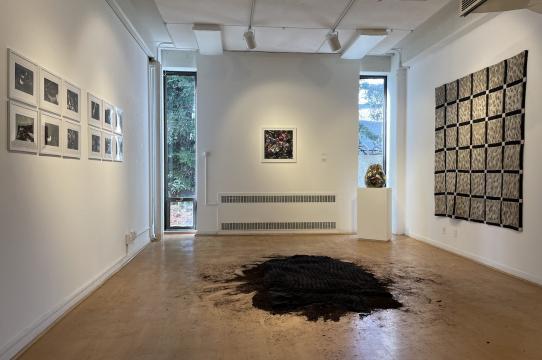 Bond fondly remembers accompanying her mother, who also studied art and was the first in their family to attend college, to the studio and helping her mom with her homework. “She won a solo show at a prestigious gallery as a result of her senior show, but wasn't able to do it because she needed to care for my step-father who got cancer around that time,” says Bond. “I am the same age she was while she was doing her art degree, and she is very supportive.”

As a follower of the Reclaiming and Radical Faerie traditions and an admirer of the extraordinary richness of biodiversity, she’s also inspired by how the web of life is so intricately connected. She’s been studying feminist science with UCSC Professors Donna Haraway, Karen Barad and Anna Tsing, as well as Queer, Decolonial Earth-based spirituality. 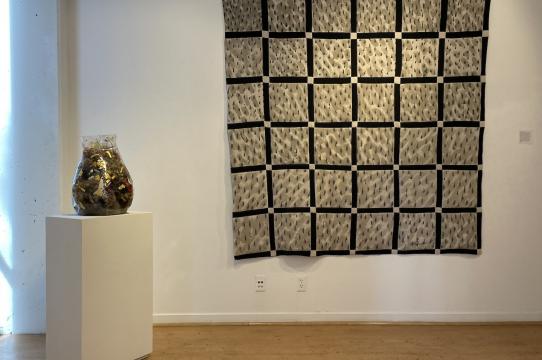 “I am trying to find more secular ways to approach the subject matter in order to make it as accessible as possible, but reverence, ritual and ceremony are hugely important for my own process, and it sometimes gets brought into my work,” says Bond. “I am very easily inspired by all kinds of things, and before I came back to school, I was a rampant reader, polymath and autodidact for many years. I have a hunger for knowledge that's pretty insatiable!”

Bond is very grateful to the Sesnon Gallery for giving her the opportunity to show her work, which consists of newer pieces that she created in Professor Ed Shanken’s Environmental Art class. “I'd also like to thank my partner Gabriel Saloman Mindel and my friend Emma Zienowicz for all the help making it happen, Edward Ramirez in the Cellar for helping me print the photos…and Dean Celine for championing the work and giving me such wonderful feedback.”