Film and Digital Media Student Looks Through a Wide Lens 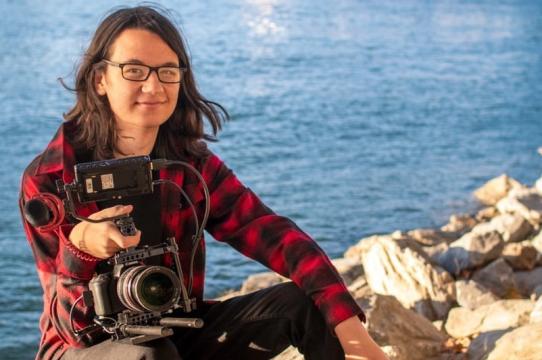 Ever since middle school Jackson T. Collins has had a passion for filmmaking that continued through high school when he was especially inspired by the advisor in his video class who encouraged him to always to his best. It led to him making an impressive video for the International Bird Rescue that won wide acclaim.

When the time came for him to decide on where to attend college, UC Santa Cruz was his top choice. “I chose to attend UCSC because I fell in love with the campus,” says Collins. “I go camping a lot with my mom and being on the UCSC campus felt like I was camping with much more amenities. I just love walking through the forest and hearing nature as I go to class. UCSC also had a film program very similar to the UCLA film program and again, I would much rather be in nature than a busy city.”

Now a first-year Film and Digital Media Major, Collins is also taking a wide variety of classes to further inform his film work and is particularly enjoying psychology. “I love learning about the human mind and why humans do certain behaviors,” he says. “I also believe that a basic understanding of psychology will help me in the Film and Digital Media world. It can help with character design and why a character acts a certain way. Also, the psychologist John Watson wrote about the psychology of advertising which is a big part of digital media.”

Outside of the classroom, Collins takes advantage of the beautiful beaches in the area by surfing and also riding around on his Onewheel (a self-balancing single wheel electric skate board). Other favorite past times include watching movies and TV, and playing the guitar.

Growing up in Elk Grove, California (near Sacramento), he was raised by creative parents who inspired his own imagination. “My Dad explored music and was in a band and my mother was a dancer and an artist. Because of how they grew up, exploring things they were passionate about, my parents supported me in whatever I was doing.”

As he continues with school, Collins is looking forward to more projects that allow him to inject his own personal creativity. “Last quarter, I had to do a project for my Writing 1 class where we had to research a topic and later present it at the end of quarter. The professor said that we could present the topic anyway we wanted to. Being the film person I am, I decided to make a video in the style of a VOX YouTube video to present my topic. That's the thing I love about projects that allow a student to be creative, there is no wrong way to present and the possibilities are endless.”