“It may sound cliché coming from a college professor, but I really get a kick out of learning" 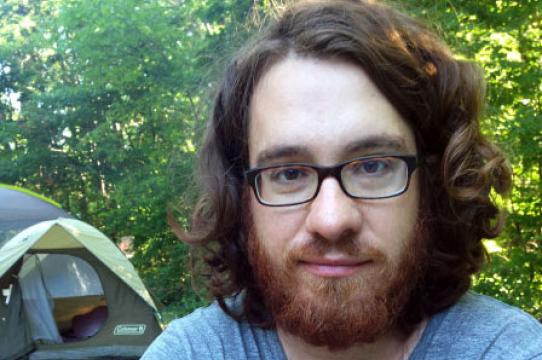 It’s been six years since Grant Whipple, with his partner and six-month-old twins “stuffed under each arm,” arrived in Santa Cruz, excited at the prospect of living in a magical place between the redwood mountains and the sea.

Now, he is happy to have landed a job as an Assistant Teaching Professor of Art where he can offer drawing and painting courses to students, which he says are as inspiring as the landscape. Art has always been one of his favorite ways to direct his energy.

“I am naturally very scatter-brained and, on a given day, have a hard time thinking clearly,” he said. “Drawing and painting help me to channel my ideas and focus, and is also a space where it is acceptable to be a little all over the place.”

For his own art projects, Whipple creates large and small-scale paintings that explore themes of ecological crisis, society and technology and posthumanism.

“My paintings explore ecological crisis in the banal experiences of everyday life,” he wrote in Hiedra Magazine, a literary and art publication where he served on the editorial board. “Whereas the violent rearrangement of large-scale natural disasters often occurs away from centers of the industrialized world, I am interested in exposing their reverberations elsewhere. Safety becomes an illusion, separation from catastrophe an ontological fallacy. Awareness of the interconnectedness of our global political economy unleashes fear and melancholy.”

His work has been exhibited at Heart & Soul Expressions Gallery and the Arts & Crafts Cooperative Gallery in Berkeley; The First Street Gallery in New York City, the Grunwald Gallery of Art in Indiana University in Bloomington and the Compound Studios in Baltimore, among many other places.

He also has a passion for teaching art to students of all ages in the classroom and private study.

He has designed and taught courses in drawing (traditional, experimental, and digital), painting (oil and acrylic), color theory, design and instructional pedagogy. He has expertise in Adobe Creative Suite, 3D modeling software, and stop animation as well as a variety of painting techniques including airbrush and Turkish ebru (marbling).

Lately, Whipple has been painting on the theme of glowing red light. “This idea came from experiencing how cold it got huddled above a space-heated only art studio, while news was coming in of wildfires on the horizon and evacuation orders were being sent out.”

A Chicago native, Whipple feels his “entire being” continues to see the world through the filter of the Windy City.  His parents continue to live in the home where he grew up and his major formative experiences happened there.

He went to the inner city Whitney M. Young Magnet High School, recently rated among the top 10 public high schools in the country. The school was created as Chicago’s first public high school for high achievers and attracted Michelle Obama. It was there that Whipple got “the creative bug” from teachers like Barry Bruner, a mentor to many artists.

Bruner was cited in a 2005 Chicago Tribune article about unforgettable teachers for his field trips to take students to sketch the city skyline and his penchant for playing jazz records in class while the kids worked on their art.

Whipple said the Windy City itself taught him a lot about art - “like long ‘L’ train rides searching for the freshest rattle can masterpieces [street art/graffiti].”

He earned his bachelor’s degree in studio art from DePauw University in Indiana, then got his master of fine arts degree from Michigan State University.

“I like to think that where I live and travel has had a profound impact on many aspects of my art making,” Whipple said in a 2016 interview in The Dialogist. “I don’t fashion myself a landscape painter but I always think of my work as being very embedded in the place I make it. For example, when I was living in Baltimore, my home was a couple of blocks from an elite university while my studio space was in a neighborhood of abandoned buildings. I found myself trying to work through these contrasts in my paintings, trying to give a sense of what it was like to move through so many shifts in just a few blocks.”

Whipple has more than 10 years of experience teaching undergraduate and graduate students at such institutions as Indiana University, Hartford College in Maryland and Michigan State.

Whipple is skilled in a project-oriented approach that involves “presenting students with conceptual and visual problems that they must solve using creative manipulation of art mediums and materials.”

His children Liana and Thalo, now 6-year-olds in first grade,  are among his many sources of artistic creativity. “I’m very fluid and susceptible to inspiration and can be motivated by large and small encounters from throughout my day to make a drawing, sketch out a song, or get a little too into play-dough time with the kids.”

He continues to enjoy listening to a lot of music. “People are usually surprised when they see my music playlist dominated by underground hip hop from the late 90s,” he said.

Whipple is always trying to grow and expand what he knows. “It may sound cliché coming from a college professor, but I really get a kick out of learning,” he said.

And that extends far beyond academics. “Lately I’ve been trying to learn to lap swim: streamline position, controlled breathing, pulling and undulating my body through the water. The guitar and piano are sites I always return to for a good lesson. You might see me walking around after the kids are asleep using a stargazing app, always trying to reorient and understand where we are.”

He realizes that constant discovery is bound to come with challenges but he’s willing to pay the price. “I love exploring off trail in the woods, but I have always gotten lost and turned around so easily,” he said. “Simultaneously navigating through fatherhood, the art world, and a new job will require many compasses.”

No matter what happens in the future, Whipple will keep learning. “I couldn’t find any jobs to be a learner, so I figured I would embrace being a teacher,” he said.