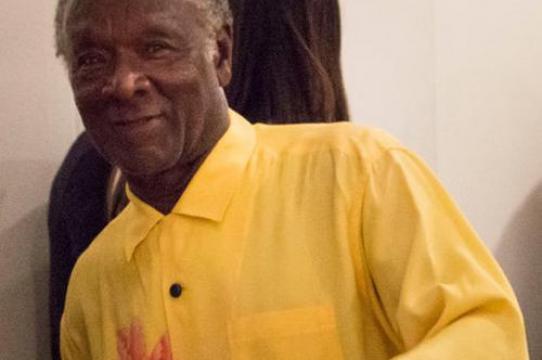 Oakland-based artist, Raymond Saunders, has taken his place in American art history ever since he first emerged as an important abstract visual artist during the 1950s. His stunning work encompasses a variety of media, incorporating painting, collage, assemblage and drawing, occasionally crossing over into sculpture and drawing. “In the process of painting, for the one thing that someone sees, there are innumerable things that they never see,” he says.

Saunders’ current exhibition at the Sesnon Art Gallery at UC Santa Cruz, Black is a Color is a solo exhibition featuring over 20 of his most dynamic and challenging works to date. Curated by Sesnon director and curator Shelby Graham and graduate student crystal am nelson [sic] (Visual Arts PhD student), this inspired exhibition showcases the profound ways Saunders troubles and refuses any easy associations of racial blackness with his deployment of the color black in his paintings.

“Saunders challenges the viewer with constellating styles in the torn-up-looking spaces of his large mixed-media paintings,” says Frank Galuszka, Professor Emeritus of Art at UC Santa Cruz. “The scale and ambition of his project as a painter calls to mind, in terms of his working of contrasts into restless order in a big and dynamic context, such creators of new artistic languages as Robert Rauschenberg and Sun Ra.”

Saunders led a student workshop on campus in October. There also will be a closing night celebration at the Sesnon Art Gallery, with Saunders in attendance, on Friday, November 20th from 4:30-6 p.m. featuring hip hop DJ Gabriel Lopez from KZSC, and complimentary refreshments.

Saunders interrogates the false premise that some artists produce work that can be uniquely identified as “black art”. Instead, he dares his audiences to look at black as merely a color – one among many on the palette of any artist who seeks to emancipate himself from the confines of identity-driven art.

"For an artist like Saunders, the gift of presence (a title from one of his large museum paintings) gives him the ability to talk about the improvisation inherent in his own fluid creative process,” says Shelby Graham. “He can describe how he works in a continuum from one piece to the next. This reminder of staying present is one of the many gifts Raymond Saunders gives us, allowing the viewer to see reflections of our society spill out from his stunning, layered and exquisite painted assemblages, from gas station signs to delicate flowers.“

The paintings featured in Black is a Color, named after his notable 1967 pamphlet by the same name, incorporate traditional and nontraditional materials. The personal scribbles, found objects, and enigmatic symbols are as revealing about his working methods, as they are subtle in encoding messages about politics, race and his life experiences as an African American artist. The dramatic black backgrounds provide a dark pictorial space reminiscent of blackboards. Knowledge and information is recorded with delicate white chalk-like lines that speak quietly against found objects and images, constructing narratives that push and pull in different directions frequently loaded with double meanings.

“Racial hang-ups are extraneous to art. no artist can afford to let them obscure what runs through all art–the living root and the ever-growing aesthetic record of human spiritual and intellectual experience. can’t we get clear of these degrading limitations, and recognize the wider reality of art, where color is the means and not the end?” [sic] – Raymond Saunders in his pamphlet Black is a Color.

Born in 1934 in Pittsburgh, Saunders studied at the University of Pennsylvania, the Pennsylvania Academy of Fine Arts, the Barnes Foundation, the Carnegie Institute of Technology, and the California College of the Arts (CCA). He is Professor Emeritus, Painting and Drawing at CCA.

He participated in the 1972 Whitney Biennial and multiple solo museum exhibits. His awards include the National Institute of Arts and Letters Award (1963), the Ford Foundation Award (1964), a Prix de Rome Fellowship in Painting (1964-66), a Guggenheim Fellowship (1976), and two National Endowment for the Arts awards (1977 and 1984)

Black is a Color is currently at the Sesnon Art Gallery through November 25, 2015. Gallery hours are Tuesday, Thursday, Friday and Saturday, 12 noon to 5 p.m., and Wednesday 12 noon to 8 p.m. The Gallery is located at Porter College at UC Santa Cruz. Admission is free.