Irwin Scholar, Mari Mafnas, Reveals Her Heart in Her Work 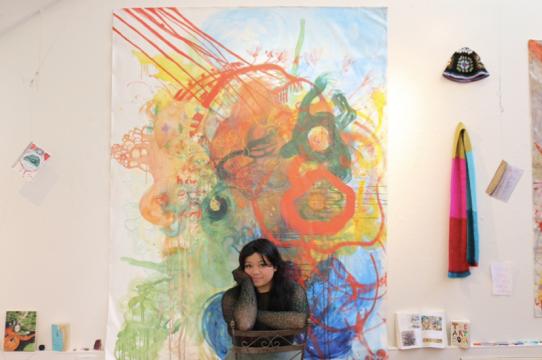 After visiting the Mary Porter Sesnon Art Gallery in 2018 on the UC Santa Cruz campus, Marian (Mari) Mafnas knew that UCSC was the place for her. She had been touring various colleges and happened to come across the annual Irwin Scholars exhibition. “I was blown away by the quality of work that was shown in that space,” she says. “I chose to join the Art program here because I was excited to start making work in the same caliber as the pieces I saw.”

Now, as she finishes her fifth year as a studio art major with a minor in History of Art and Visual Culture (HAVC), Mafnas herself is preparing to be part of this year’s prestigious Irwin Scholars exhibition at the Sesnon.

“I cannot believe that I’m leaving UCSC as an Irwin Scholar,” she says. “I am beyond grateful to be able to show my work and my heart to others in such an extraordinary space with extremely talented artists. I will be showing paintings with installation elements. I tend to work pretty big, so I’ll be putting my all (physically, mentally, emotionally) into it. It’s a surprise in terms of content, but I am very excited for the opportunity to connect with others, and I can’t wait for June!”

Mafnas was born in Saipan, one of the Mariana Islands and part of the Northern Mariana Island commonwealth in the United States in the Pacific Ocean between Japan and Hawaii. She came to the mainland United States with her mother when she was just three years old and they started living in Portland, Oregon. By the time she was in 7th grade, her family had moved around a bit, finally settling down in Orange County, California where she lived until moving to Santa Cruz.

Her art is inspired by many influences but she particularly moved by the work of Jean-Michel Basquiat(1960-1988). “Basquiat’s street sensibilities and ability to translate the collective consciousness through the individual has always affected me most,” she says. “He so clearly was able to connect his deepest vulnerabilities to any viewer, while still keeping a sense of mystery and childlike curiosity for the world. He was incredibly strong yet unwaveringly sensitive. He also deeply understood the experience of being an artist of color in America. He’s been my hero since I was in high school and visited his work at the Broad in LA.”

Other influences include Marina Abramović, Ai Weiwei, Joan Mitchell, Yoko Ono, Ernesto Neto, Jenny Saville, Takashi Murakami, Cy Twombly, Van Gogh, Melissa Gwyn and Frank Galuszka. “Kusama taught me how to love myself as a woman, Abramovic taught me to be bold, Ai Weiwei taught me that I need to change the world, and perhaps the hardest feat of them all, Joan Mitchell taught me abstraction.”

After graduation in June, Mafnas plans to move to San Francisco and continue with her art practice. Eventually, she hopes to move to the East coast for grad school and before that, to garner an internship at SFMOMA along with showing her work in various galleries. A study abroad program in Korea this summer studying ancient relief woodblock printmaking is also coming up.

“I normally work at night, painting after class from 7 p.m. to 7 a.m. and I don’t plan on changing it anytime soon,” she says. “I am mostly excited to save up for my own studio so I can have a new art home. I am also going to breathe more, eat ice cream, and not have to worry about any more essays!”

Mafnas is very grateful for the time she’s had at UCSC, especially as part of the Art Department. She’s made many friends and credits them with making her not only a better artist but a better person. “I love every single person that I have met in the art department.”

As she gets ready for the future, she advises others to do what they feel is best for them. “I once worked in a cubicle as a paralegal and almost dropped out of school because I was an English major. Please do art if your heart is called towards it!”

You can see more of Mafnas’s work on her Instagram: @exist.en.tial.