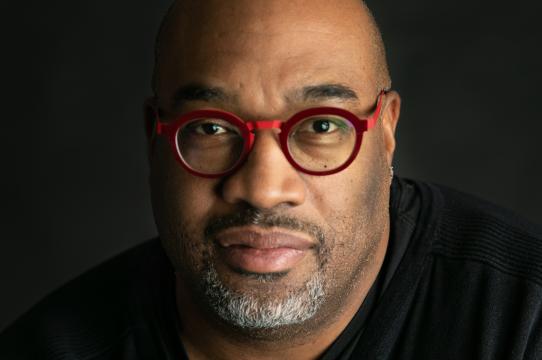 For James Gordon Williams, music is a calling, not a choice. It’s a sonic art that can close distances between people in a divisive world.

“Music is the only language that people understand and feel immediately without knowing how it’s constructed or knowing what the lyrics might mean,” said the pianist, composer, improviser and cultural theorist. “Music is an open text that provides the best models for unifying humanity.”

A native of Los Angeles County, the new Assistant Professor of Music previously served as professor in the Department of African-American Studies for eight years at Syracuse University in New York. He is an accomplished performer who has appeared at music festivals around the world and played famous venues like Birdland, Symphony Space, the Village Vanguard and the Knitting Factory in New York City. Syracuse Stage commissioned Williams to write music for playwright Kyle Bass’ “salt/city/blues.”

Jazz Improv Magazine critic Winthrop Bedford had this to say about his skills: “James Gordon Williams is nothing less than accomplished, impressively creative pianist and composer, with great depth and substance.”

Williams is happy to come to UC Santa Cruz because it helps him achieve two goals: working in a progressive music department and working for the University of California. “I chose to teach at UC Santa Cruz because it is a music faculty position with perpetual opportunities to share multiple forms of knowledge intrinsically aligned with the core of who I am as an artist, scholar and human being,” he said, adding “I was looking for those who were looking for me.”

Using the framework of Black Geographies and Black feminism, his interests as a scholar are in how African-American composers and improvisers express their lived experience through creative practices that often connect to past and contemporary U.S. social movements. His work studying how musicians create space through their human expression in midst of social constraints.

“Crossing Bar Lines” grew from my interest in how African American composers and improvisers use musical expression to articulate what it means to be Black in an often hostile world,” Williams said in the introduction to the book. “Consequently, this book is about how Black musical space is created by, and represented in, the work of five African American improvisers… There is no separation between how an African American musician creates and how or she ontologically expresses what it means to be Black in this world. The life and politics of African American improvisational culture are reflected in how improvising musicians create their own Black music space in which to articulate their humanity.”

Among other topics, the book covers how several of the musicians interact with the Black Lives Matter movement, how they challenge gender imbalance in the improvisation world, and how they improvise in their daily lives outside of music.

Gayle Wald, professor of American studies at George Washington University, said Williams showed the way the musicians engage Black humanity in their art. “His close attention to the aesthetics of these artists’ politically engaged music will be indispensable to cultural historians interested in the Black radical tradition. At the same time, Williams uses music to produce a valuable framework for thinking about the possibilities of Black radical expression outside of the politics of (racial) representation."

Williams’ articles have been published in Ethnomusicology Review, Jazz & Culture, Jazz Research Journal, Journal of African American Studies, Liquid Blackness, Music in American Life; A Encyclopedia of the Songs, Styles and Stories That Shaped Our Culture. He is a member of the Society of American Music and the American Musicological Society.

Williams said he had a “magical and mysterious” childhood. He agrees with Picasso, who said that all children are born artists, but the problem is how to remain that way. “It’s a worthy problem to have in a complex world; a problem tied up with race, privilege, and access,” he said.

His research into music was a “natural extension of (his) fascination, study, and lifelong contemplation of sound.” He earned a bachelor’s degree in music performance and composition at the New England Conservatory of Music and then moved on to New York University, where he received his masters of arts degree in music. Finally, he earned a doctoral degree in music from UC San Diego.

Williams’ said his goal is to not just think out of the box but to destroy the box.  “The greatest challenge is to shake off the shackles of one’s own constraining thoughts relative to what is possible to achieve in this limited space and time,” he said. “These thoughts are often inherited in group think and preached as gospel.”

While he has mostly stuck to playing piano, improvising, and composing, he is often asked if he does voice-over work because of the distinctive sound of his voice. “Back in my conservatory days, I was often mistaken for a vocal major after uttering a few words,” he said. “One of the vocal teachers suggested I take voice lessons. I sang in the chorale years ago, and I fondly remember singing the Mozart Requiem amongst other vocal works. Yet if you are a composer, improviser or instrumentalist, you are always using your voice.”

He is grateful for the many mentors who have encouraged him in his career. “The unselfish support I have been given over the years can only be repaid through my mentorship to the students I encounter. Social mobility is not just an abstract theory but a practice of actively creating pathways for others.”