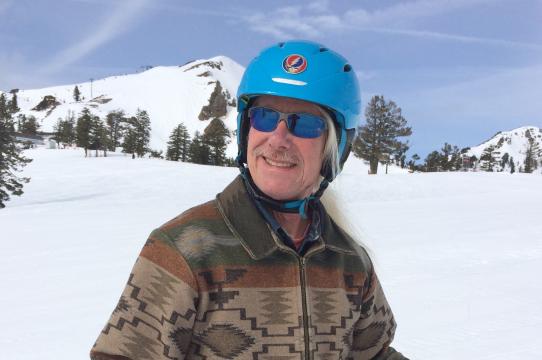 If you’ve driven through UC Santa Cruz’s main entrance and past the Barn Theater, you’ve probably noticed the colorful signs on the side of the barn that announce a variety of upcoming events, from music concerts to lectures.

Aside from their artistic virtues, what’s really remarkable about these billboards is that they are all hand drawn and painted by one artist, Jim Urban, who has been doing this meticulously detailed work on campus since 1978.

His process involves first painting the background during the day, then taking transparencies of original artwork and projecting them onto the barn at night and outlining them. Then on the following days, drawing and painting the images directly onto the sign space. Signs are usually displayed for at least a couple of weeks until a new one goes up, but once they’re painted over to make way for the next one, that’s it. Thankfully, Urban has photos of his favorite ones. 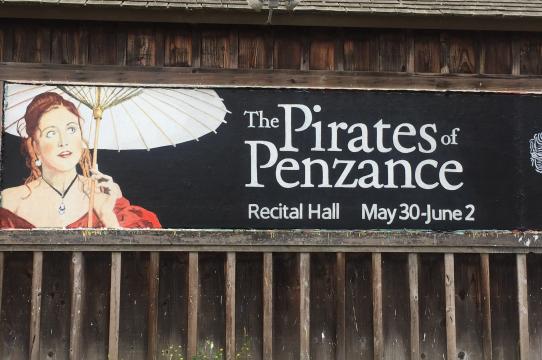 “Jim is not just a painter, he is a magician!” proclaims Tracye Lea Lawson, the Arts Division’s event/ticket manager who coordinates the Barn sign schedule. “He always expresses enthusiasm and appreciation for the work, never complains, and always has as cheerful and colorful attitude as vibrant as his tie-dye shirts. We mostly talk about music when he comes in, and it’s been my pleasure to work with him these past 13 years.”

Along with painting the Barn signs, Urban also has had a successful career as a muralist and graphic designer. His interest in art goes back to his creative parents and adventurous childhood that had him living all over the world – from Chicago, Illinois to Moscow during the early 1960s in what was then the Soviet Union.

“My dad was a World War II vet who fought in North Africa and Italy, and he was promoted to colonel after the war and stationed in Moscow where he met my mom working at the American Embassy,” said Urban. “He played the violin and was in a swing band before the war. She sang, painted, and played the piano. They loved music, art, and travel and it definitely rubbed off on me as did their kindness and compassion.” 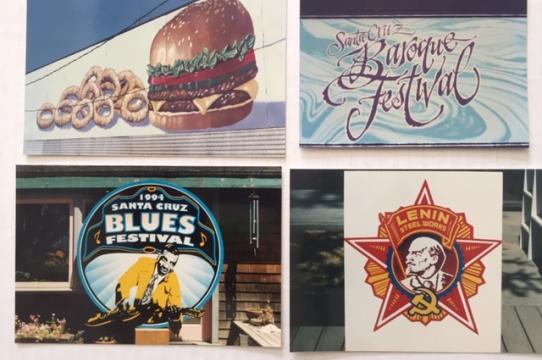 When his parents settled in Virginia, his high school art teacher recommended that he attend American University in Washington, D.C. where he enjoyed the rich cultural renaissance brought on by the early 1970s, including the time when the Grateful Dead gave a free concert right outside of his painting class. Music always remained influential in his work, especially pieces by Frank Zappa.

After graduating, what he thought would be a short trip to Santa Cruz to visit his college housemate, turned out to be where he would live for the rest of his life. Needing a job in his newly found home, he decided to go to the performing arts office at UC Santa Cruz to ask if they were looking for someone to paint signs. Fortunately, they said yes.

“I love to paint and working with other artists in scenic art is always great and different,” says Urban. “Movies, TV, theater, union jobs all need artists and I was lucky to work with some very nice, talented people…some of them my heroes in some pretty exciting gigs. It's a team effort; everybody helps each other.”

His unswerving positive attitude has helped him get through some tough times, especially when he was diagnosed with colon cancer a few years ago. Now in remission, he’s eternally grateful for the excellent care he received. 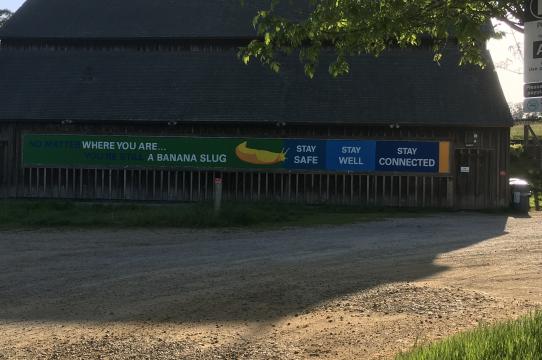 “Many people, friends and some I still don't know contributed, sent good will and visited to help me make it through,” he says. “When you experience something like that you realize there aren't enough words to describe the gratitude you'll always feel. They helped save your life. My doctors and nurses told me just seeing someone get better is enough for them. I understand that, but I'll always want to thank them more somehow.”

Urban has worked steadily at UC Santa Cruz for over 40 years now. He says he’s stayed for so long due to the great people he works with, many of whom have become his friends. “The Barn signs are always different and being a part of all the amazing events on campus is rewarding. It's important to know these signs are designed by many very talented people who deserve a lot of credit.”

When he’s not painting, Urban enjoys music, art, travel, skiing and hiking. He advises art students to keep practicing and studying their craft. “Experiment, seek out great art, visit galleries and museums, travel if you can. There's always more to see and learn.”