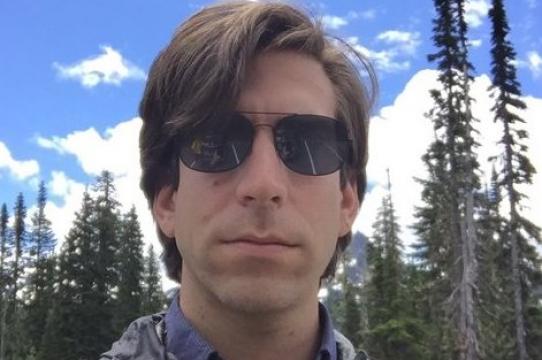 Jon Myers, a DMA candidate in composition at UC Santa Cruz, creates music for a variety of settings, from fully notated acoustic pieces to live electronic feedback music. He works on soundscapes and sonic maps of places. His current project is called the UCSC SoundMap, which is an ongoing collaboration between graduate and undergraduate students to  build a large corpus of surround-sound environmental recordings that highlight the ecological diversity of the campus and surrounding areas, and explore mapping, perceiving, tagging, and visualization strategies for interacting with this large corpus.

Much of Myers’ output has been rigorously process-based and statistically controlled, often involving repetition and cycles to shape the flow of time via mnemonic markers and temporal shifting. Lately, he has been working on quarter-tone Disklavier studies and just-intoned fanfares for arbitrarily tuned choirs of bamboo flutes.

“The idea [of the UCSC SoundMap] is to capture, archive, and showcase the amazing sonic diversity that the campus has to offer, both as a recruitment tool for prospective students, a corpus of recordings that could be useful for ecological research, and as a vehicle for educating students in the artistic practice of acoustic ecology,” explains Myers. “We do this by using ambisonic microphones to make surround-sound recordings of the campus, and I have built this beta of a web interface for folks to interact with this corpus/archive.”

Myers is a doctoral student in Algorithmic Music Composition at UCSC, working with Professors Emeritus Larry Polanksy and David Dunn. In 2014, Myers completed a Master of Arts in Music Composition from Mills College in Oakland, CA, where he studied with James Fei, Zeena Parkins, and Chris Brown. Previously, he studied with Anthony Braxton and Alvin Lucier as an undergraduate at Wesleyan University in Middletown, CT, where he was awarded the Gwen Livingston Pokora Prize for music composition.