Joseph Erb is a Leader in Getting the Cherokee Language Included in the Latest Technology. 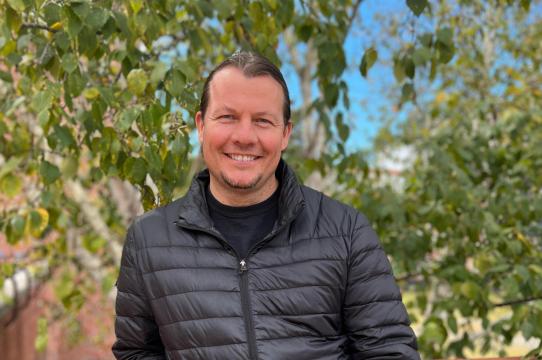 The son of a Cherokee mother and a white father, Joseph Erb gained an appreciation for his rich indigenous heritage from family, friends and community people.

But that was as far as it went. “Growing up, I never saw any shows or animations in the Cherokee language until I created them as an adult,” said the new Assistant Professor of Film and Digital Media.

He is known for making the first computer animation in the Cherokee language, “The Beginning They Told,” featuring a talking beaver, buzzard and water beetle. The 11-minute program is posted on the Cherokee Nation YouTube channel and has been shown at the Smithsonian.

He has also shared his skills with others, teaching Cherokee and Muscogee Creek students how to do their own animation to tell native stories. Since the early 2000s, he has been a leader in getting the Cherokee language included in the latest technology.

As a native of Oklahoma, Erb had many opportunities to learn about Native Americans. The state is home to 39 tribal nations, with 7.9 percent of the 4.4 million population listing itself as Native American. Erb said his mother’s side of the family has been in the same community in the state since the United States government forcibly removed them from their homeland in 1839. President Andrew Jackson signed the Indian Removal Act, forcing some 60,000 Native Americans to leave their homes in the Southeast and walk hundreds of miles in a “Trail of Tears” to resettle in Oklahoma, then known as Indian Territory.

“I had a mixed upbringing,” Erb said. “We had the same public education and media content as everyone else around mainstream American culture. But I was able to see different values and customs from people in my family and the community.”

He started out as a traditional artist, working in sculpture, painting and jewelry, and earned a bachelor of fine arts degree from Oklahoma City University. Then, he took animation and film courses at the University of Pennsylvania, gaining a masters of fine arts degree. Soon, he began using new media to create traditional stories in the Cherokee language.

“I found time-based media was a powerful approach to narratives and indigenous language revitalization,” Erb said. “It keeps me always updating my skills and learning new media to see the Cherokee language and culture in these ongoing new digital environments.”

He is inspired by great creators of indigenous stories across different media. Erb counts himself as a big fan of Sterlin Harjo (director of FX comedy series “Reservation Dogs”), Sierra Ornelas (co-creator of comedy series “Rutherford Falls”), Ben Harjo (internationally known painter and printmaker) and Jonathan Thunder (painter and digital media artist). “Indigenous narratives have been going for tens of thousands of years but seeing indigenous stories in new media is really inspiring.”

One of the biggest challenges has been getting the Cherokee language on computer systems and digital devices. Though the Cherokee developed a written language in 1821 and started the first native newspaper in 1828, new technology has been slow to embrace the language. Erb has been one of the leaders to change that.

Soon after the first iPhone came out, Cherokee tribal officials, including Erb, contacted Apple about including their language. Initially, only a few dozen of the estimated 7,000 languages in the world were included.  Apple agreed to add Cherokee in 2010 even though there were only about 8,000 estimated speakers.

Erb knew that if the language wasn’t added to the latest technology, it would eventually die out with kids never learning it. “If it doesn’t have Cherokee on it, they all speak English,” he was quoted in the Denver Post at the time. “They’ll just give up their Cherokee… because the cool technology is in English. So we had to figure out a way to make cool technology in Cherokee.”

Soon, because of Erb and others’ efforts, Cherokee speakers could use their language to search on Google, communicate with friends on Facebook and complete work on Microsoft. Translators from the Cherokee Nation volunteered to help make the projects a reality.

This was not an easy feat as many concepts used in technology like “security” or “error message” don’t have equivalents in Cherokee. Erb worked with others in the Cherokee nation to invent the needed Cherokee words, such as such as ᎤᎦᏎᏍᏗ (u-ga-ha-s-di) or “to watch over something” for security; ᎦᎵᏓᏍᏔᏅ ᏓᎦᏃᏣᎳᎬᎯ (ga-li-da-s-ta-nv da-ga-no-tsa-la-gv-hi) or “something is wrong” for error message.

Just a couple of years ago, Erb was featured on CNN for his comments on Google Maps including the Cherokee Reservation boundaries. “It is an exciting step forward to be included on the map,” Erb said in a statement in the report. “This is a visual reminder that our nation is still here and a contemporary Indigenous nation of the Continent.”

Erb recently received the Creative Native Award for his large-scale work in the new First Americans Museum which opened September 2021 near Oklahoma City. “Indigenous Brilliance” is a two-story digital illustration on copper panels at the entrance to the galleries. He was able to create the piece through assistance from the Oklahoma Art in Public Places program, administered by the Oklahoma Arts Council along with the Native American Cultural and Educational Authority.

“Indigenous people often don’t get the credit for their contributions to the world,” he told The Oklahoman newspaper when the museum opened. “For example, the agricultural contributions and all the different foods that people utilize around the world that were … cultivated by indigenous people over thousands of years. Sewer systems, star knowledge, all these are the kinds of things that indigenous people brought to the table. They were the early scientists of this land.”

Erb formerly worked as an assistant professor at the University of Missouri, teaching digital storytelling and animation. He was drawn to UC Santa Cruz because of the high quality faculty in his field. “I wanted a place that I could grow and be valued in creating films that respected indigenous narratives and ways of creating films and media,” said Erb, who enjoys riding his bike and enjoying friends and family in his off time. “Another thing that interests me is the strength in social justice and giving value to outside mainstream media work.”