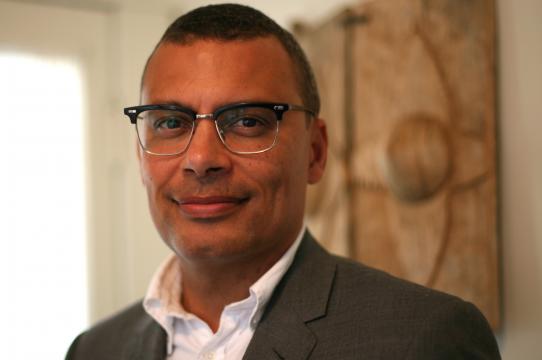 Connecting the recording of a Formula One racing car together with a Cathy Park Hong poem about a drive in California might not seem to most people like musical components, but for composer and Assistant Professor in Music, Matt Schumaker, these are the epitome of musical sounds, along with the assistance of computers, that propel his computer-assisted composition and interactive computer music research.

“I’m a composer with a deep interest in technology, looking towards the computer as a resource for new strategies in composing and performing music,” says Schumaker. “One of my earliest concert memories is of my dad driving us down to Stanford, spreading a blanket out on a grassy hillside and listening to a concert of computer music projected from big loudspeakers as it grew dark around us. It was the most strange and interesting music that I could imagine, and from then on I think I fell in love with electronic music.”

A Bay Area native who grew up in San Francisco, Schumaker was surrounded by the City’s vibrant cultural scene from a very young age and his parents exposed him to a variety of musical genres. “Before I was a teenager, they had taken me to many concerts and events, from Miles Davis to Devo, Ella Fitzgerald to the SF Opera, Winston Tong to the Kronos String Quartet, Ornette Coleman to the SF Symphony and beyond,” he says.

“When I finally got to college and got my hands on my first digital synthesizer, a Synclavier, I was totally hooked,” he says. “The variety of sounds, the timbres, that I could explore through electronic music was a tremendous lure and I loved working in the studio, using it as an instrument.”

Schumaker earned a Bachelor’s degree in music and philosophy from Dartmouth College, an MFA in music composition and computer music from Princeton University, and a Ph.D. in music composition from UC Berkeley. Prior to UCSC, he taught at UC Berkeley and was an MLK Visiting Scholar at the Massachusetts institute of Technology (MIT). His music has been performed widely, including by the Radius Ensemble, Dinosaur Annex, Winsor Music, Eco Ensemble, Left Coast Chamber Ensemble and by clarinetist Rane Moore at the Virtual SICPP 2020.

“I went back to graduate school at UC Berkeley kind of late in life and have always felt grateful to the University of California for taking me in and giving me such an amazing graduate education,” he says. “From my teaching there as a graduate student instructor and later as a lecturer, I also know that I love the type of students that the UC system attracts — bright, independent thinkers, with roll-up-your-sleeves-and-get-it-done attitudes.”

He’s especially enthusiastic to be teaching at UC Santa Cruz where he has been impressed by the Music Department’s commitment to racial justice which, in turn, has led to what he describes as a radical revision of the undergraduate curriculum, seeking to decentralize the traditional standard and offer ways to embrace the variety of backgrounds and interests of UCSC’s students.

“It’s an approach that seeks to reach out to all students and guide them as they work down personal paths towards mastery in music at the highest level of scholarship,” he says. “I can see that it’s an approach that would have suited and better supported me as an undergraduate, so I’m excited to take a role in shaping the program and teaching within this new structure…The fact that UC Santa Cruz is located in one of the most beautiful places in the country is also a big plus!”

Art has also played a significant role in influencing Schumaker’s work. At age 11, when his mother moved to Rome, Italy, he began visiting her there twice a year and then relocated there during his high school years. He became entranced with studying the area’s rich history, art and architecture, falling in love with the ancient Roman culture and Italian Renaissance. “To be a teenager, wandering around that city at night with friends, with all the ruins lit up was magical,” he says.

His love of art never waned and lately he’s drawn inspiration from African-American abstract painters. “A little over two years ago, I travelled with MIT’s Black Student Union to the National Museum of African American History and Culture where I saw paintings by Felrath Hines and Ed Clark that pointed to an African-American engagement in abstract expressionism from the birth time of that style,” he recalls. “I was amazed to see this work because, even though my dad is a painter himself, I had no idea about the history and extent of African-American engagement in the areas of Abstract Expressionism, Color Field painting and Lyrical Abstraction, until the works of the more recent generation of artists that began to emerge in the 1990s. This is because, in their heyday, these older artists received little representation and recognition within the United States.”

Shumaker composed a piece called Mehretu trace, scored for oboe, Bb clarinet and live electronics after being inspired by artist Julie Mehretu. “I began by tracing markings from her paintings using a digital tablet and collecting data from this action, then using this custom-built software to translate the pen position and pressure of these drawn contours into musical lines,” he explains. “The music takes shape both as a score for the players and as extended electronic sound sequences and real-time processing that accompany them in performance.

“I hope that this type of work connecting musical and graphical lines reflects new ways that creators can use computers to marry musical and visual arts with increased fluidity and depth while remaining connected to deep emotional and humanistic concerns.”

His current interests are formulating around developing computer programs to further assist with his composing. The programs have led him to engage in creative dialogues between algorithm, his intuition and imagination, and then deepening his connections between his music and its inspiration.

“I can use algorithms for interpolation to create musical lines that reflect the contours of aerodynamic streamlines radiating off of an airplane wing in a piece that’s an homage to Robert Lawrence, one the first African American astronauts,” he says.

As Schumaker looks forward to teaching at UCSC, he advises students not to be afraid to reach out whenever they need help, and stresses the importance of also finding quite places to be and to think. He refers to Samuel Beckett’s mantra of “Try again. Fail again. Fail better” as an example of how to persevere.

“Life is long and progress doesn’t always look like a straight line,” he says. “Sometimes you might feel like you’re not making progress because you’ve taken a detour, but that detour could help get you where you really need to go.”

Professor Schumaker can be reached at: mschumak@ucsc.edu.