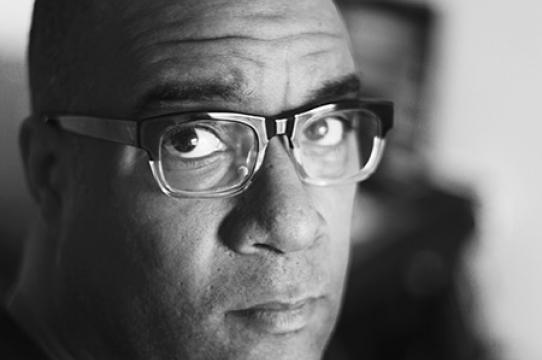 The late American photographer Robert Mapplethorpe first gained international attention due to his now infamous exhibition, The Perfect Moment (1988–90), which was initially held at the Corcoran Gallery of Art in Washington, D.C.

Although the exhibition included classic portraits and floral studies, it was the S&M images that drew the greatest response, leading to claims that they were too offensive for public viewing and a subsequent campaign, spearheaded by North Carolina Senator Jesse Helms, to ban government funding of “indecent” images.

Over the years, significant critical attention has been paid to those images and the artist’s reputation as a provocateur and sexual renegade. But a new book by UC Santa Cruz history of art and visual culture professor Derek Conrad Murray, Mapplethorpe and the Flower: Radical Sexuality and the Limits of Control, offers the first dedicated book-length critical study of Mapplethorpe's lesser-known still life flower photographs.

“The book is an interdisciplinary investigation into the symbolism of the flower as envisioned by a photographer whose production was mired in controversy, in large part due to his thematic exploration of radical sexuality and queer subcultural life,” said Murray. “In many respects, the tensions surrounding the artist’s life and work overshadowed the complex symbolism of his flower photographs, which were often regarded as conceptually distinct from his more notorious images. Mapplethorpe and the Flower argues that the flower synthesizes the artist’s interconnected concerns with beauty, sexuality, repression and ultimately death.”

“There is a general scholarly and critical consensus that Mapplethorpe’s flower photographs were a concession, or a capitulation on the part of the artist to market forces—in other words, saleable objects for uptight collectors,” he added. “The book shows that such assessments are both careless and ultimately incorrect. It was within the flower photographs that Mapplethorpe was able to illustrate his historical acumen and sophistication as an image maker and symbolist.”

Murray explained why he decided to focus on this particular topic

“Art history and visual studies have not yet adequately attended to the complexities of difference—in terms of race, gender and sexuality— both historically and in the present,” said Murray. “For me Mapplethorpe’s flowers have something very important to say about visual culture that is especially pertinent to our current moment. The artist straddled the line between social acceptance and marginalization—a status he embraced.”

“But what truly motivated this study was the fact that Mapplethorpe had a huge impact on the development of visual culture, contemporary art, and particularly black art.” Murray added. “Mapplethorpe’s photographs of African-American men generated such ire among the black intelligentsia—especially by black queer artists and intellectuals—that it inspired an entire generation of artists, and a vibrant critical discourse, that was aggressively engaged in a project of self-representation and image resuscitation.”

Murray’s research focuses on the junctures of African-American and African diasporic art, post-black art and aesthetics, cultural theory, identity, and representation. He has contributed to leading magazines and journals of contemporary art and visual culture, including American Art, Art in America, Art Journal, Third Text, and Nka: Journal of Contemporary African Art, where he is associate editor.

Murray is also the author of the book, Queering Post-Black Art: Artists Transforming African-American Identity After Civil Rights He has served on the editorial board of Art Journal (CAA) and is currently co-editor of Visual Studies; the official journal of the International Visual Sociology Association.