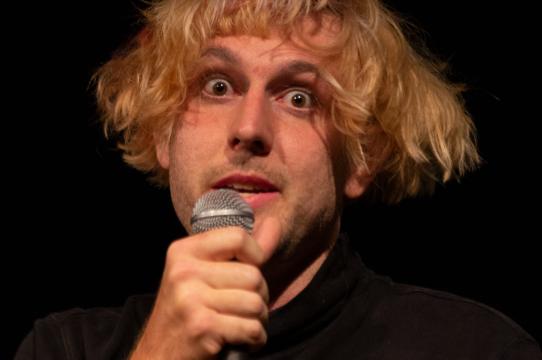 Patrick Michael Ballard, a “fool magician” with a poet’s sensibility, pursued creative endeavors spanning visual arts to performance before landing at UC Santa Cruz this year as a Visiting Assistant Professor of Performance, Play and Design.

Putting his eclectic work into a neat summary is no easy task.  When asked for a short bio, this is what he said: “He develops techniques for revealing endangered processes of nuance in gradients of nonsense. He makes speculative dowsing rods, symbolic resonators and sonic atmospheres for the orchestration of games and performance works. His process integrates puppetry, writing, collaborative stewardship of objects, and acts of whimsical care to hybridize fantasy with uncanny intimacy for tuning collective story-organs.

Ballard’s winding road to the university began when he met assistant professor AM Darke at a Renaissance Faire. Ballard, who is based in LA, was excited when she urged him to apply for the post. “When I looked at the work of the other faculty here and I saw the way this mission at PPD and (Art and Design: Games and Playable Media) felt so complimentary to mine, I felt like it was a door to destiny to be able to participate in this moment,” he said. “I feel truly honored to be welcomed in.”

What UC Santa Cruz is offering is rare at the institutional level, he said. “This idea of Play, Performance, and Design opens up so many hybrid spaces for aesthetics to reconsider the old models of object-subject relationships, and deal more with these sticky, subjective, atmospheric dimensions of being alive that challenge identity, experience, and art to adapt to an exponentially, and cosmologically changing world organism.”

Ballard grew up in Southern California in a Catholic family with a mother who was a music therapist and cantor at church and a father who was an electrician and archaeologist. “My mother would just burst into song at any possible moment and my father was very into the history of things,” he said.

He learned music, mysticism and professional ritual from his mother and learned metaphysical objects, tricks and the power of masks from his father. His dad loved to go to garage sales and thrift stores, and was thrifty, trading electrical work in exchange for affordable tuition at a Montessori school.

After Ballard’s parents divorced, within a few years, he met his step-mother, who shared his birthday and is an artist.  “We would make things in parallel-play at the kitchen table,” he said. “That is where I truly learned that the whole world as we know it to be is made at the kitchen table for me. It is where the outside flows on wheels from across the land to make it to the store where I procure my food, and it is much like the hearth where we can tell stories about our day. These stories were always so fascinating to me, and I really appreciated being able to just sit and draw mazes, or learn to sew alongside another person who felt the compulsive desire to make.”

Ballard was “extremely hyper-active” as a kid and was inspired by comedian Jim Carrey, often channeling characters into uncanny voices and actions on the spot. “I made sound effects with my mouth while I made drawings,” he said. “The lines were sound. They were inseparable.”

His teen years brought tremendous loneliness as he struggled to find his place in the world. “Most people were white, followed normative conservative values, and weirdness, queerness, and other mystics were hard to come by,” he said. “I played basketball because I thought it would help me make friends, but I continued to draw a lot of monsters and played a ton of games. When I found theater I realized I had all of this energy pent up from being an intense person with no place to channel my energy.”

Unfortunately, his high school offered little in the way of arts support, and he eventually looked to the Internet for inspiration. “As a junior in high school, I had unlimited access to the Internet for a couple hours after school every day,  (with) my parents long separated and both working full time or more,” Ballard said. “That’s when the Internet made chaos of my mind, and everything changed forever.”

“I was living a double life through the Internet,” he said. “I literally forged a life-performance avatar named XxElmer_of_the_DarknessxX who was my shadow twin, and also another one named Legend_of_Potato_Larry that I used to just spam and get followers. Larry was more of a tool to explore the limits of social media, but Elmer was different. I went out and met other teenagers as Elmer and created a life where I could connect with other weirdos that I just couldn’t find in my context.”

At this point, Ballard decided he was going to be an artist. He wore black hair and tight black clothes, quit basketball and focused on writing poems on Xanga and making “histrionic” drawings. He enrolled in a sculpture program in California State University Long Beach, where he could make cross-disciplinary work and engage his passion for “integrating line, form, sound and performative action.”

This exploration of creativity has put him back to where he was as a child. “I’ve held onto that process throughout my entire life in one way or another,” he said. “I think  it is possible that artists just choose not to forget things we inherently embody as children.”

He strives to keep that sense of openness as he enjoys times with friends, going on walks, playing games and talking until the candles burn out.  “I love to write and amuse myself with ideas about artworks that could never be made,” he said. “I love being surprised by comedians, magicians, clowns, and artists.”

His inspirations for his artistic pursuits are endless. “I am inspired by the persistent fragility of spider webs, and I am inspired by the grinding of tectonic plates against one another. I am inspired by abyssal depths; by mystery; by traitors who broke what needed to be broken so that the embers of love and care could be stewarded across treacherous flows of time.”

For Ballard, artistic expression should be used to create a loving, caring and integrative world.  “The forces that shape the earth and the earth itself: they are all players in an infinite game,” he said. “Anyone who would take away the agency of a player in this infinite game is in opposition to the fundamental spirit of art for me.”