Installation utilizes five video screens to create a conversation between black men from nearly a dozen cities across the U.S. 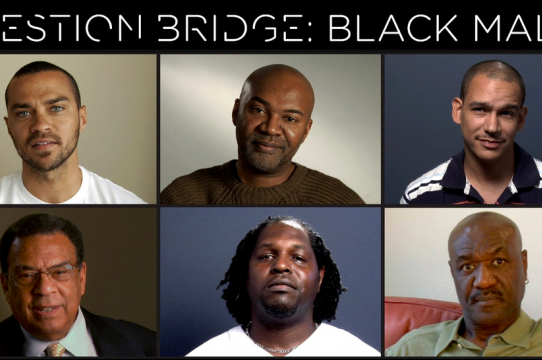 Question Bridge: Black Males is an exhibition in which a wide array of videos have been merged together to simulate face-to-face conversations between a diverse group of more than 160 black men across the United States.

These men answer each other’s questions about life in America and share their personal stories, beliefs, and values in discussions covering such themes as family, community, love, interracial relationships, education, and wisdom.

The idea is not just to create connection and understanding among black men, but also to illustrate the diversity of thought, character and identity in the black male population that is not often portrayed in American media.

Named as one of the Bay Area’s top exhibitions of the year by the San Francisco Chronicle when it was originally launched in 2012, Question Bridge: Black Males has now been exhibited at nearly 40 institutions, including the Brooklyn Museum; Oakland Museum of California; Birmingham Museum of Art; California African American Museum; DuSable Museum of African American History, Chicago; Harvey B. Gantt Center for African-American Arts+Culture, Charlotte, NC; Schomburg Center for Research in Black Culture, New York; and the Sundance Film Festival.

Question Bridge: Black Males will run at the Mary Porter Sesnon Gallery on the UC Santa Cruz campus from February 6 through April 6.

Admission is free and open to the public. 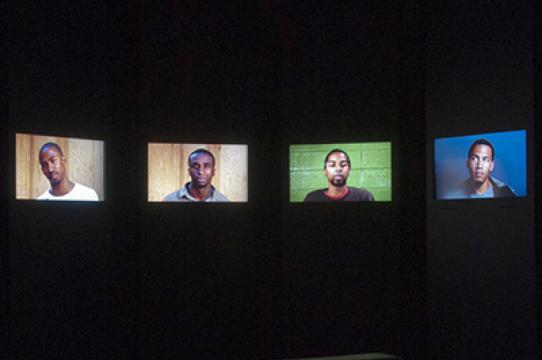 “This is a riveting five-screen multimedia installation with compelling conversations about what it means to be a black male in America,” noted Shelby Graham, director of the Sesnon Gallery, who is presenting the exhibition in collaboration with UCSC’s Institute of the Arts and Sciences.

“We are all ‘world consumers of black culture' as stated by scholar, Bryant Keith Alexander, and this project offers multiple perspectives relevant to our students and communities,” she added.

Graham said that the format of Question Bridge: Black Males--as a video installation and website--allows a stress-free, safe place for difficult conversations to emerge and be shared in a public setting.

“My goal is to make every UCSC student aware of this project and through word of mouth endorsement, encourage all to visit the Sesnon Gallery,” she added. “We’ll have weekly student-led events and discussions with refreshments."

Question Bridge: Black Males was created by artists Chris Johnson, Hank Willis Thomas, Bayeté Ross Smith, and Kamal Sinclair. Their video work is in the collections of the Smithsonian National Museum of African American History and Culture, the Brooklyn Museum, and the Oakland Museum of California.

Johnson originated the Question Bridge concept with a 1996 video installation he created for the Museum of Photographic Arts and the Malcolm X library in San Diego, California. He will speak at 6 p.m. on February 6, at the opening reception of the exhibition at the Sesnon Gallery, which takes place from 5 to 7 p.m.

Sesnon Gallery regular hours are Tuesday through Saturday from noon to 5 p.m. (and Wednesdays until 8 p.m.) during the academic year, or by appointment for special tours.