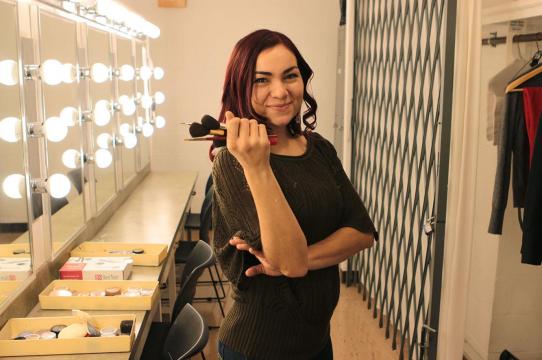 Citing nature as her inspiration, Acting Assistant Professor of Costume Design, Department of Performance, Play & Design, Pamela Rodriguez-Montero, grew up near the lushness of the rainforest in Barva de Heredia, a small town in the Central Valley of Costa Rica, where most of her family still resides. Her childhood playground was the coffee fields her grandfather cultivated as she played alongside her three sisters and many cousins.

“I remember spending countless hours observing and absorbing nature, from the little details to the whole eco-systems,” she says. “I sincerely admire the clever design solutions, purpose, and balance in nature.” She went on to earn a BFA in Visual Communications from the National University of Costa Rica and received her MFA in Scenography from the University of Kansas, graduating with honors.

Now, with over ten years of dance and theater technical design experience and more than four years of undergraduate teaching experience, Rodriguez-Montero has also received awards for her excellence in teaching. Upon being awarded the Tinker Field Research Grant, she travelled to Guatemala to collect reference materials for her research in the Mayan dance/drama of Rabinal Achí.

“I trained as a scenographer,” she says. “I have designed sets, costumes and lighting. After spending time in these areas, I decided to focus on costume design because I truly enjoy the different levels of collaboration and human interaction in this field. We collaborate with technicians, performers, other creatives and directors to tell meaningful stories.”

Along with nature, Rodriguez-Montero also looks to her mother as making an impression on her future career. “My mother was a single parent and worked as a seamstress,” she says. “I remember seeing her create and transform fabric into garments as if it was magic and always being fascinated by her hard work, artistry and creativity. Things were not easy, but we had her and the support of a village and, for that, I am grateful.”

Before joining UC Santa Cruz, she was the Assistant Professor of Costume Design at Kennesaw State University (Georgia, U.S.), but her first time on the UCSC campus was back when she was still in grad school and came to the area to visit a friend. At the time, she immediately fell in love with Santa Cruz’s beauty, but she chose to ultimately teach there because she wanted an exhilarating space to explore the role of scenography in digital performance and play. She also saw UCSC as a safe place where she could develop antiracist and decolonizing pedagogies and artistic practices.

Being a mother herself has taught her to learn from both her accomplishments and failures. She’s experienced the challenges that come with having been an immigrant and a woman of color. Like so many immigrants to the United States, she had to learn a new language and culture, and then deal with work-life balances during the pandemic. “These experiences have motivated me to be more conscious, intersectional and critical in my commitment to social justice,” she observes. “I am honored to be part of a community that supports my goals and values my contributions.”

Rodriguez-Montero’s areas of interest include Latin American and Indigenous Ceremonial dance/drama, intersectionality in the design fields (design for diversity), anti-racism in the practice of costume, makeup and hair design, as well as computer-aided design, animation and digital rendering techniques. “I am coming to a new department after the merger between Theater Arts and the Art & Design: Games and Playable Media program and I couldn't be more excited to start exploring the role of costume design in different worlds, mediums and intersections.”

She especially looks forward to collaborating with students. “There is a lot of trust and responsibility in designing garments for others; that is why I strive to honor each cast member's individuality and make decisions that respect and celebrate their diversity. I am committed to continuing to develop antiracist, trans-affirmative, and body-positive approaches to design,” she says.

Montero also encourages students to passionately explore their own artistic talents in theatrical design. “Be kind to yourself, be true to your voice and know that you are important and valued,” she advises. “Be fearless, humble and present…[and] please feel free to reach out. I am here for you!”