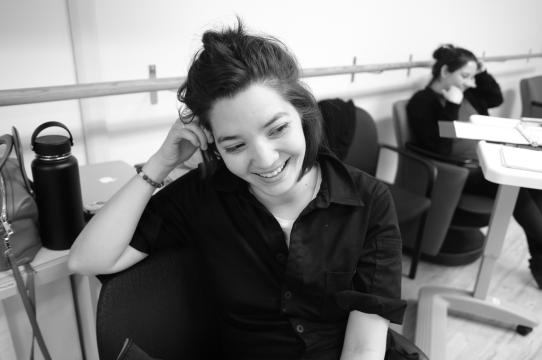 A performance director who has directed new plays all around the country, Rebecca Wear is inspired by the new, open-minded pedagogical approaches of her colleagues at UC Santa Cruz.

The new Acting Assistant Professor of Performance, Play and Design is excited to be a part of a department on the “cutting edge of developing new approaches to, new understandings of, and new audiences for games, art, and performance work.”

Wear comes from Southern California where she was working as a freelance director, dramaturg and educator. Her recent directing projects include Velina Hasu Houston’s “TEA,” billed as a tale of women, immigration and survival, at LA’s Hero Theatre, where she was a resident director, and Keiko Green’s “Hometown Boy,” about Asian-American Southerners, at Actor’s Express in Atlanta. Next year, she is scheduled to direct a play in Georgia:“Kim’s Convenience,” about a Korean immigrant facing a challenging business situation in Toronto.

“My work lives at the personal nexus of ‘most fun possible,’ challenging conversation, and fulfilling engagement of others,” she said.

On her website, Wear said she “makes work about the things we don’t know how to talk about; she gravitates toward culturally specific pieces that distill big ideas about identity and politics into compelling interpersonal relationships.”

That leads her to collaborate often with musicians and composers, choreographers and dancers and the surrounding geography.

Wear grew up in Altadena, north of Pasadena, “where the mountains are close, there is a lemon tree on every block, and downtown LA is a smoky mirage.” While her parents aren’t professional artists, she said they are artists in their own ways. Wear’s childhood was spent with her siblings playing spies outside, experimenting with watercolors and kicking soccer balls. She wasn’t allowed to watch TV so she read voraciously, which she said is “obviously the foundation of my love for story.”

At UC Santa Barbara, she taught Introduction to Dramatic Writing, Culture Clash: Studies in Latinx Theatre, Introduction to Acting, and other courses. Last year, she was nominated for an Academic Senate Outstanding Teaching Assistant Award.

She is always up for new experiences and has studied in Taiwan, learned new skills from a hippie commune and toured with a communist theater troupe in India.

During a year off from college, she studied Thai massage at Esalen Institute, a stunning cliffside retreat center and intentional community in Big Sur that gained fame in the 1960s for its human potential workshops. “There was lots of time with redwoods and the Pacific, which may be plebeian for Santa Cruz’ers, but was pretty magical to someone who hadn’t spent much time here,” she said. “There were many 5Rhythms dances, late night music jams in the natural hot spring baths, and group Gestalt sessions.”

She also studied and toured with Janam, short for Jana Natya Manch, a radical, left-wing New Delhi-based amateur theater company. Wear said working with the group was “an incredible introduction to ethnographic work, as well as an impactful series of lessons in group generosity, community engagement, and the politics of danger, hope, and possibility in theater.”

Wear also mentored students at The Orchard Project, a program in New York that provides a space for artists to create original innovative new work.

In 2019, she was accepted for a National Directors Fellowship at the Eugene O’Neill Theater Center in Connecticut, which “fast-tracks the professional experience of emerging stage directors and propels the advancement of new plays.”

Wear’s influences span a diverse group of artists, scholars, philosophers, politicians, actors and dancers. Among the many she named include Alok Vaid-Menon (gender non-conforming writer and performance artist), Grace Kyungwon Hong (UCLA prof of Asian-American studies and Katherine Dunham (dancer and choreographer). Other groups she admires are “workers in domestic spheres, service industries, and healthcare who maintain personal dignity and ensure dignity for others, anyone who is actively fighting for our planet's rights and artists who continue to value the act of creative work above the response.”

Then, there are her other influences - “Cleo (my sister’s dog), fungal networks, sewers, magicians, clowns, drag queens, drum majors, etc.”

Her biggest challenges involve navigating the difficult times. “I think that the performing arts, as a field at large, is in a time of great financial and existential turbulence,” she said. “So this is a moment for us to translate meaningful reflection on the ways in which we can better support one another into material change. And also to recalibrate taste hierarchies, as well.”

To further those ends, she co-founded an interdisciplinary anti-racist pedagogy reading group at UC Santa Barbara.

When she’s not working, Wear loves to daydream about future dogs (on her website, she says she “continues to search for an adoptable hypoallergenic pup”), read fiction and assemble gorgeous fruit plates. She also enjoys being outdoors. “I just got back from a two-week rafting trip down the Grand Canyon,” she said. “It was an incredible way to spend time with family, and to experience the microscopic nature of this moment in time.”

She’s looking forward to getting to know everybody at the university, learn about their work and contribute to the department’s projects. “On the flip side, I’m also really excited to work with the students who are drawn to these kinds of inquiry,” she said. She is grateful to be getting settled in such lovely surroundings. “Is there a more beautiful campus in the U.S.?”