Shakespeare Is on the Go at UC Santa Cruz 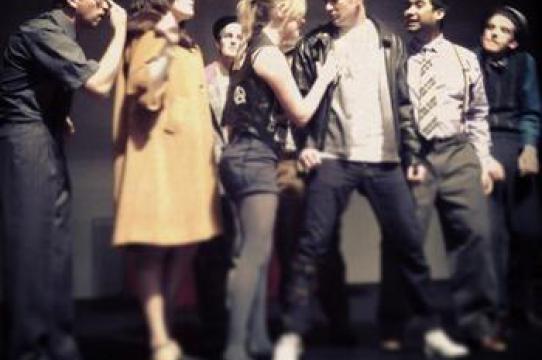 For the cast of this year’s Shakespeare To Go production, all the world is truly a stage as they start performing one of Shakespeare’s most popular plays, As You Like It, and take it on the road this spring to various middle schools and high schools throughout Santa Cruz County. Creating an abridged, 50-minute version that can be easily transported is no easy feat. But the student thespians, led by über talented director Patty Gallagher, Professor of Theater Arts at UC Santa Cruz, are more than up to the challenge.

“I want the student audiences to walk away from our show intoxicated by the power of language and, more importantly, I want them to understand the enormous power of imagination and intellectual curiosity,” notes Gallagher.

The program has proven to be very successful at engaging students of all ages in the works of Shakespeare and the art of live theater, and also serves as an excellent springboard for additional classroom work in arts and literature. “It’s a lot of fun without being ‘dumbed down’,” says Kate Edmunds, Chair of the Theater Arts Department. “There are no concessions to the intricacies or foreign nature of the speech pattern. It’s good story telling that draws in youngsters and shows them that they can participate in cultural life.”

Over the years, local middle school and high school students have been enthralled by the productions and, for most, Shakespeare To Go has been their initial introduction with the bard and his work. They’ve been so inspired that many have sent notes to the cast to thank them:

- “You put on an amazing show! All of you should be on Broadway! Thank you Shakespeare To Go for coming!”

- “Thank you so much for performing ‘Henry V’. I am in awe of you! The way you can get into character with barely any props and such a small set…you are amazing.”

- “You have inspired me to be in our school play next year.”

- “I learned that I’d rather watch a play live than a recording.”

The way it works is that each year, a Theater Arts faculty member creates an adaptation of a Shakespeare play and assembles a cast comprised of UC Santa Cruz theater students. There are usually 80 students who audition for the play, and then eight to ten actors are selected with three understudies, along with stage managers and crew.

“I’m tremendously proud of the fact that one reason Shakespeare To Go has gone on for so long is the quality,” says Edmunds. “We also perform for schools who can’t pay the relatively low fees that we ask of them and that’s how it should be. In addition, we generate study guides and after-performance conversations, so the teachers have tools to add the play to their overall curriculum.” Due to a generous grant from U.S. Bank that supports lower to medium-income families, Shakespeare To Go has been able to reach out to even more community schools that cannot afford the performance fees, which range from $450-$500.

The UC Santa Cruz theater students who are participating in the production this year are really looking forward to performing. Mindy Paul, who is playing the roles of Rosalind and Ganymede, appreciates the collaborative process and having the opportunity to travel to various schools and perform for young students. “It's fast-paced and challenging, but incredibly rewarding,” says Paul. “Shakespeare can be tough, but once you get past the antiquated language, you are ready to take it on! Everyday, we have little ‘ah-ha!’ moments. I am constantly impressed and delighted with what our cast members and designers come up with!”

Another student, Zoe Agapinan, who plays Phebe and Adam, has always wanted to be involved in Shakespeare To Go since she started at UC Santa Cruz, and, like the rest of the cast and crew, loves working with Patty Gallagher. “Patty is incredible. She is such a giving director, and knows our strengths as actors and works to fine tune those strengths for the show.”

Theater student, Sharon Shao, is also thrilled to be part of the production this year. “My favorite aspect of this production is the collaborative nature of our rehearsal process. We have a brilliant team of designers, directors, and actors all working together…each member contributes something different yet equally important to create a truly innovative final product. It’s one of the most rewarding experiences one can have as a theater arts student at this university.”

Highlights this year include public performances of As You Like It at the Boulder Creek Library on Saturday, May 2 at 1:00pm and at the Museum of Art and History (MAH) in downtown Santa Cruz on Saturday, May 30 at 1:00 p.m.

As Gallagher relays to the young audiences before each performance: “You can be anything. You can be everything. You can do it today because all you need is a bare stage, your quick brain, and your shining heart. All you have to do is imagine and believe.”

pictured: scene from the 2014 Shakespeare To Go production of "Hamlet"