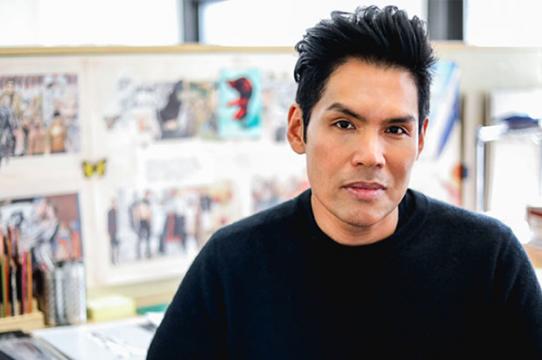 Growing up in Cebu, the Philippines surrounded by a close-knit extended family, Clint Ramos has fond memories of his childhood there. But he was also profoundly influenced by one of the country’s most tumultuous periods in history which cumulated in 1986 when the People Power Revolution toppled the brutal 20-year kleptocracy of Fernando Marcos and democracy was restored. Ramos credits that turbulent time with inspiring him to be an activist.

That advocacy for justice combined with his exceptional creative talent would steer him to be the first person of color to win a TONY Award for best costume design in 2016 for his work in the groundbreaking production of Eclipsed, which became the first play with an all-Black and female creative cast to premiere on Broadway.

Of the experience, Ramos reflects that he was grateful but also saddened that it took so long for a person of color to win the coveted award in the costume design category. “It is an honor that I don’t take lightly,” he says. “It is also a reminder of the vast work ahead.”

He decided to join the faculty at UC Santa Cruz as a visiting professor after a nudge from Danny Scheie, professor of theater arts at UCSC. “I’m also aware of the excellence of the school, so when Danny Scheie, a respected colleague asked, it seemed like it was going to be a good fit,” said Ramos. “I’m grateful and excited.” Ramos will be teaching during the current academic year through June 2021.

During these challenging times, Ramos urges students to take care of themselves. “Reach down to your core and focus on what gives you joy and what channels the most amount of truth,” he says. “While the social justice work must not end until full equality is reached, know that this COVID pandemic moment is just another stop in the giant arc of art-making.”

After earning his BA degree in theater arts at the University of the Philippines, Ramos knew where his lifelong path would take him. “The theater led me to being a designer,” he says. “The theater taught me everything I know about being a citizen of the world.” From there he attended the New York University Tisch School of the Arts via the Gary Kalkin Memorial Scholarship and earned an MFA in design for stage and film.

Considered one of the best in his field, Ramos’s career has skyrocketed, garnering numerous prestigious industry awards. He has designed sets and/or costumes for over 200 theater, opera and dance productions, including the Broadway productions of Grand Horizons, Slave Play, The Rose Tattoo with Marisa Tomei, Burn This with Adam Driver and Keri Russell, Torch Song, Once On This Island, Six Degrees of Separation with Allison Janney, Sunday in the Park With George with Jake Gyllenhaal, In Transit, Eclipsed with Lupita Nyong’o, Violet with Sutton Foster and The Elephant Man with Bradley Cooper.

In addition to his TONY win for Eclipsed, he was nominated for TONY Awards for his designs for Once on This Island (2018) and Torch Song (2019). He has two OBIE Awards, three Lucile Lortel Awards, a Drama Desk Award, an Outer Critics Circle Award, two American Theater Wing Henry Hewes Awards, TDF Irene Sharra Young Master Award, Helen Hayes Award, and a Craig Noel Award, among many others. In 2014 and 2017, he was bestowed the Ani ng Dangal Presidential Medal for dramatic arts from the President of the Philippines.

Along with designing, Ramos loves to teach. He has held professorial positions at the A.R.T. Institute at Harvard University, Georgetown, SUNY Purchase, NYT Tisch School of the Arts, and most recently, was professor of design and head of design and production at Fordham University.

Ramos finds his greatest challenges to be inequity in all areas of American society and in art- making, but he’s also inspired by humanity and all of its idiosyncrasies. He deeply understands the importance of having diverse role models for students of color, observing: “You cannot be what you cannot see.”