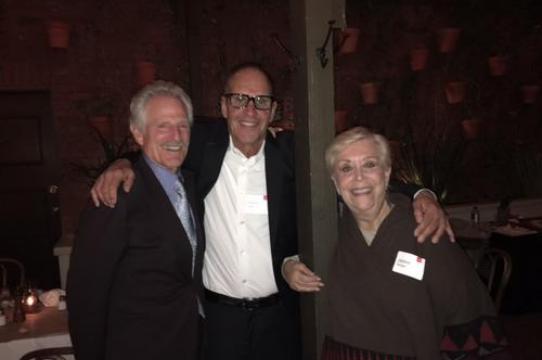 The UC Santa Cruz Arts Division is proud to announce the David Yager Fund, created by friends and supporters of the Arts to honor the legacy of former Dean, David Yager.  The fund was launched at a recent celebration at Dominic’s restaurant in West Hollywood to toast Yager as he transitioned from Dean of the Arts at UC Santa Cruz to President of the University of the Arts in Philadelphia.  Yager was surprised to learn that the Yager Fund had been created in his honor. The festive event was filled with alumni, donors and friends who were all there to express their deep appreciation for Dean Yager and all that he has done for the Arts Division during his six-year tenure.

It was a wonderful evening and a marvelous opportunity to get together, not only to thank Dean Yager, but also to reconnect with old friends and the university.  Several of the guests paid tribute to Yager and glasses were raised to toast the Dean for his many outstanding accomplishments, along with his dedication to the students, especially those in need. It was noted that Dean Yager has taken the Arts Division to the next level with his commitment to creating the highest quality in efforts, excellence, research, creativity and innovation within the Division.

The Yager Fund provides awards to Arts Division students showing exceptional artistic practice and creativity and/or in need of emergency support to maintain their academic career. Funds may also be used to recruit students who otherwise would not be able to afford a UC education.