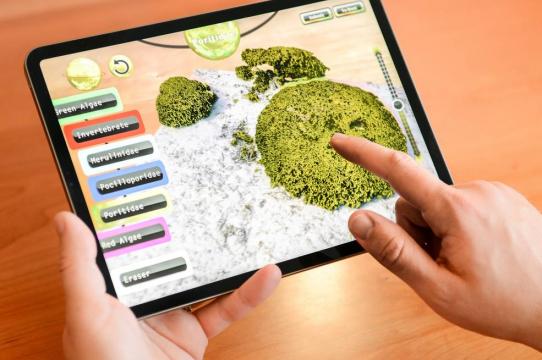 Last month, NASA released NeMO-Net, an innovative iPad game where players help NASA classify coral reefs by painting 3D and 2D images of coral. NeMO-Net was developed by a team of eight UC Santa Cruz games students/developers from various divisions and was first shown to the public at the 2018 UCSC Games Showcase at the Silicon Valley Center.

Benjamin Tran, who is working towards a degree in Art & Design: Games and Playable Media (AGPM), was part of the group and obtained his internship at NASA via a student success program offered through UC Santa Cruz’s Arts Division. 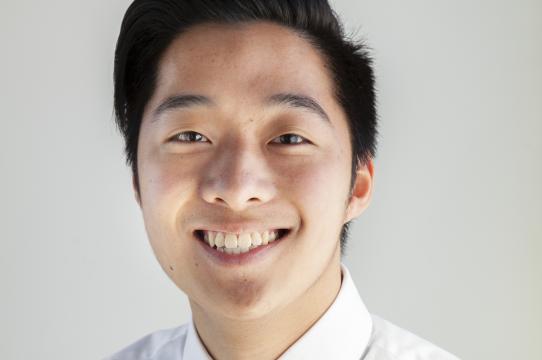 Another AGPM student, Gian Paolo Paredes, who graduated from UCSC in 2019, was the main 3D artist for the project and jumped on board to gain valuable experience in his field. “A highlight for me was seeing the game evolve over time,” he said. “My first big challenge was creating the boat that served as the main hub of the game and experimenting with its visuals and how we could communicate to the player with visual cues and colors.”

NeMO-Net is similar to other crowdsourced citizen science games like Foldit or Phylo in which players help generate real data that is fed back into ongoing scientific research. As they play the game, players’ actions help train NASA's Pleiades supercomputer at Ames to recognize corals from any image of the ocean floor. The supercomputer "learns" from the classifications of coral that players make by hand, using machine learning techniques to classify on its own. The more people who play NeMO-NET, the better the supercomputer's mapping abilities become.

Jarrett Van Den Bergh, the lead game developer for the project, had an internship at NASA Ames Research Center in 2017-18 and recruited the other UCSC students to a team that developed the initial game prototype as their undergraduate senior capstone project. After he graduated from UCSC in 2018 in Computer Science: Game Design, he was hired as a full-time employee at NASA and worked on the NeMO-Net project until it was released. He is currently a visualization software engineer there. 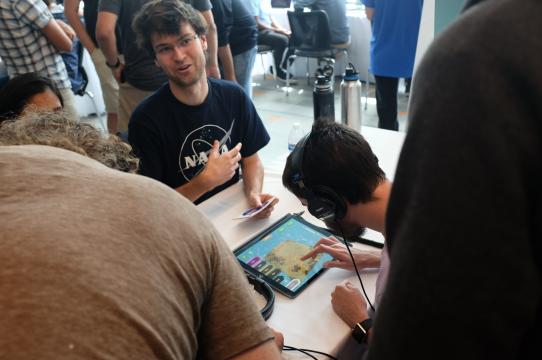 “I began working part time at NASA as a sophomore in 2016 doing interactive 3D visualizations of data and working on fluid simulations,” said Van Den Bergh. “My supervisor was developing an algorithm called ‘fluid lensing’ which lets us take videos from above the surface of the water and make it look as if the water isn't there. This allows us to get large amounts of really clear 3D images of coral reefs for the first time. Normally, ocean waves distort the images.”

NASA had a quantity of 3D coral reef data but still needed more information such as how much of the coral is actually alive and how much overall data there is about any particular family of coral. NeMO-Net was launched to solve these issues and to create a global dataset for coral reef classification.

“By far the best part of the project was being able to work with the amazing UCSC staff and students,” said Van Den Bergh. This game would not have been possible without the help of Elizabeth Swensen [Art & Design: Games and Playable Media], Marcelo Viana Neto and Robin Hunicke, [Digital Arts and New Media] and Adam Smith, Nathan Altice and Jim Whitehead [Jack Baskin School of Engineering]. In 2019 we were able to bring on Benjamin Tran as an intern and it was really inspiring to see the talent and teamwork skills of new students.”