UC Santa Cruz Campus was Ready for its Close Up 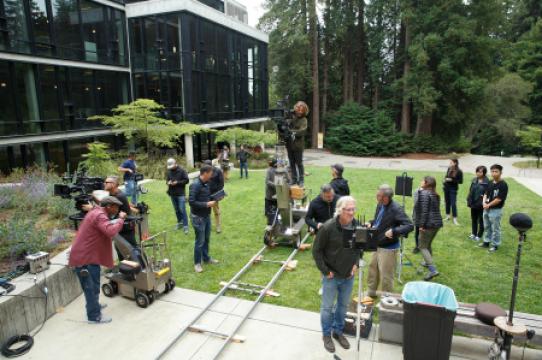 Producers of Devs, the new sci-fi thriller that premiered March 5 on Hulu, were looking for just the right location to depict a high-tech corporate campus with a tinge of dystopia.

It needed to look like Northern California — sort of Silicon Valley-ish — and it needed to say science and tech. UC Santa Cruz was the right place at the right time.

“The brutalist architecture among the redwoods was perfect for us,” said Alex Garland, Devs writer, director, and co-executive producer, when he returned to campus March 6 to premiere the first episode and discuss the making of the eight-part FX Productions series. 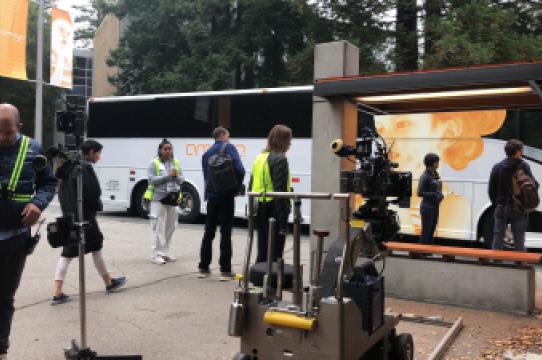 Filming took place at McHenry Library,  Quarry Amphitheater, Science Hill and other locations across campus over several weeks in late August and September 2018.

“It is an extraordinary campus,” said Allon Reich of the London-based production house DNA TV and co-executive producer. Reich said he and Garland loved the look of McHenry Library and many of the scenes take place there.

Hero of the hero

Filmmakers call the key location of a production the “hero location.” The UCSC campus is the hero location for Devs and McHenry Library is the “hero of the hero,” Reich said.

After screening the first episode at the College 9/10 multipurpose room, Reich and his producing partner, Andrew Macdonald, joined Garland in a discussion with Soraya Murray, associate professor of film and digital media. All three noted UCSC’s distinctive and varied architecture and how it fit just right for their TV series.

Devs focuses on a young software engineer, Lily Chan, played by Sonoya Mizuno, as she investigates the secret development division of Amaya, a quantum computing company where she works, which she believes is behind the disappearance of her boyfriend the day he began working in Amaya’s “Devs” division.

There was never a guarantee that a California location would be used for the Amaya campus. Locations in Europe and Canada were considered, said the location manager, Simon Lake, who happens to have graduated from Stevenson College in 2006 with a degree in anthropology. 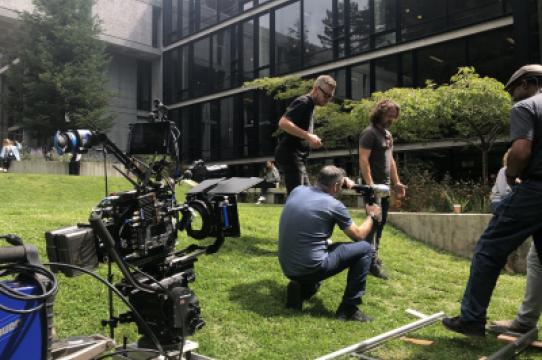 San Francisco figures prominently in the story, too, and filming had to take place there but “whether we found the campus in this country was up in the air,” Lake said.

After getting a general idea of what the producers were looking for, Lake started researching what tech campuses look like. He checked out some Silicon Valley companies, which weren’t quite right, and then considered institutions like UC Berkeley, San Francisco State and Cañada College.

“Being a UCSC alumn, I asked them a silly question,” he said, “‘would you consider basing it in Santa Cruz?’”

The answer was yes and “I went down and started photographing my favorite architecture on campus,” recalled Lake, who lives in Berkeley.

“All the different pieces of campus, that’s what made it work, new architecture, old architecture. Locations are kind of a character, at least a background,” he said. “With Santa Cruz, I think the brutalist architecture lends some gravitas to the company.”

Brutalism, favored in the 1950s and ‘60s, is typified by simple, block-like structures that often feature exposed concrete. The first iteration of McHenry Library, the original field house,  and the first science buildings are classic examples.

Science at the story's heart

“Science is at the heart of this thing,” Garland said during the discussion with Murray. He said his idea for the series came from his love of science and a theory that by coupling the philosophy of determinism with massive computing power one could predict the behavior of all lifeforms.

Garland, Reich, and Macdonald are English and previously worked together on the sci-fi films

Ex Machina and Annihilation, which Garland wrote and directed. Ex Machina was nominated for an Academy Award for best original screenplay in 2016. 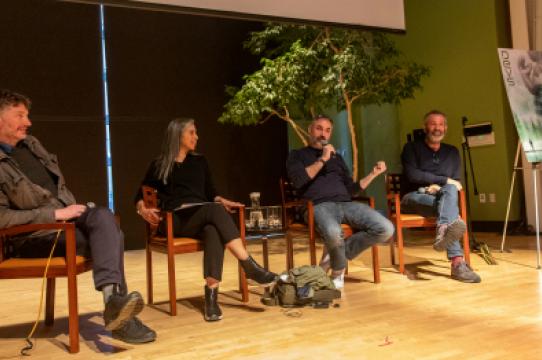 Filming took place during intersession when campus is relatively quiet. The production team that numbered more than 100 at times was based in the east remote parking lot which gave them easy access to McHenry Library and the Quarry.

In the first episode, soaring aerial shots show the redwood-covered campus at its most scenic, with the odd juxtaposition of a giant statue of a little girl peeking over the treetops.  The statue stands in the Quarry Amphitheater and is of Forest’s daughter Amaya who died as a child. The significance develops in later episodes. 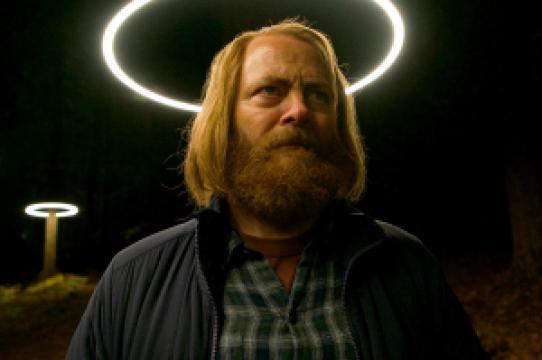 Several UCSC students and alums worked on the production. One, Yin Wu (Cowell, 2018, film and digital media) began as a production assistant during the campus shooting and stayed on for a week of filming in San Francisco.

“It was a blast,” he said. “I learned more about the production aspect of filmmaking during those two months than I have in my entire career as a film student,” he said, and credited director Garland with making a “perfect first-time-on-set experience.”

Wu also discovered a career path. He has since returned home to China and is about to start an internship at a video effects company in Beijing. He said a Devs crew member connected him with the Devs VFX supervisor after seeing his photography and thought he might be interested in the field. 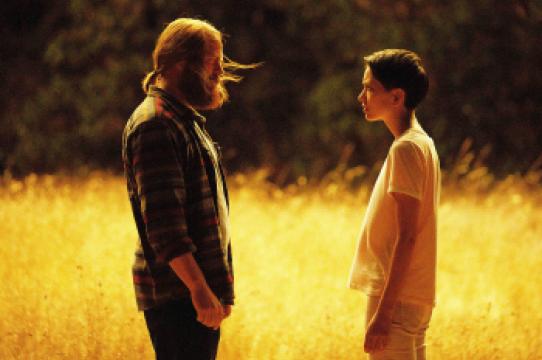 Looking back on the production nearly two years after he first started working on it, Lake, the Stevenson grad who was location manager, credited Garland, Reich, and Macdonald as being a “treat to work with.”

“UCSC is not the easiest place to work,” he said. “It helps when you work with a very smart guy, especially when he’s the writer and director.”

In the end, what really sealed the deal were the redwoods, Lake said, and they figure prominently in many scenes. “Really it was the trees that they fell in love with,” he said, “paths through the trees, bridges through the trees. Pretty spectacular.”