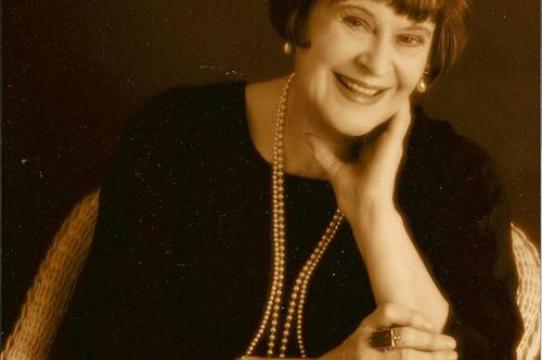 From designing elaborate Shakespearean costumes for the Shakespeare Memorial Theatre in Stratford-upon-Avon to the iconic, sexy leather catsuit worn by Diana Rigg in The Avengers, Jan Rowell’s extraordinary talent could be found in classical productions as well as the hippest television shows. Working for period and costume dramas, children’s educational programs, musicals, and some of the most popular TV programs of her the time, Rowell’s versatility showed a remarkable range.

Another one of Rowell’s many accomplishments was teaching. She taught costume design as a guest lecturer at UC Santa Cruz in 1986 and especially admired Porter College, leading her to leave, upon her passing, her entire costume library collection to UC Santa Cruz. Through the generous support of Rowell’s cousin, Jennifer Peli, and Peli’s son, Mario—who navigated the tricky process of international shipping—the collection was secured through Porter College Provost Sean Keilen and UC Santa Cruz Theater Arts Department Chair Kate Edmunds. Brandin Baron-Nusbaum, Associate Professor, Theater Arts, was the main point person in getting the collection to the campus, sorting through it, and strategizing its storage to ensure it will be available to as many students as possible

“Jan Rowell's generous gift of her library is evidence of the deep bond that she formed with the campus as a college lecturer,” said Sean Keilen. “When her cousin first contacted me about the donation, she emphasized that for Jan, teaching in the colleges at UC Santa Cruz and working closely with the students she met there, was a profoundly important experience for her. I am honored that the Jan Rowell Memorial Costume Library will be a source of discovery and inspiration for our students for a very long time to come.”

The rare books of the Jan Rowell Memorial Costume Library will be housed in McHenry Library at UC Santa Cruz, while technical books related to clothing construction will be housed in the Theater Arts Costume Shop.

"It's so touching that in her limited time at UC Santa Cruz and Porter, Ms. Rowell would remember it so fondly that she would make such a significant donation to us,” said Brandin Baron-Nusbaum. “The Rowell Memorial Library is one of the largest private collections of 19th and 20th century European costume history that I have ever viewed. I'm thrilled that such an incredible resource is now available for generations of costume designers and historians at UC Santa Cruz."

Rowell, a native of England, studied at the Ealing School of Art in London and started her career by creating costumes for theaters as diverse as the Royal Court, the Regents Park, Open Air Theatre, and the Royal Opera House, Covent Garden. She also was an accomplished fashion illustrator and regularly contributed sketches to fashion columns in the London Times. She began working in television as a freelance costumer in 1964 for the BBC, Anglia TV and ABC/Thames TV.

It was in 1965 when Rowell created what’s considered to be one of her most renowned costumes, the black leather catsuit worn by Diana Rigg’s character, Emma Peel, in the popular British spy series The Avengers. Out of the dozens of productions Rowell worked on over the following 20 years, her favorite was Simon Raven’s adaptation of Nancy Mitford’s novel, Love in a Cold Climate (1980).  Other career highlights included: King Lear (1974), Tomorrow’s People (1975-6), Quincy’s Quest (1979), Agatha Christie Hour (1982), Anyone for Dennis (1982), Follies (1983), and Chekhov in Yalta (1988).

Later in life, along with lecturing at UC Santa Cruz, she also taught at many art institutions including: Croydon College, Northbrook College in Worthing, Central School of Speech and Drama, and other programs in Cardiff, Stratford-upon- Avon, Totnes, and Greenwich.

“I am grateful to Jan Rowell for the remarkable bequest, and to Sean Keilen and Brandin Baron for their work in bringing the gift home to Theater Arts,” said Kate Edmunds. “The archive will deepen research resources for our students.”