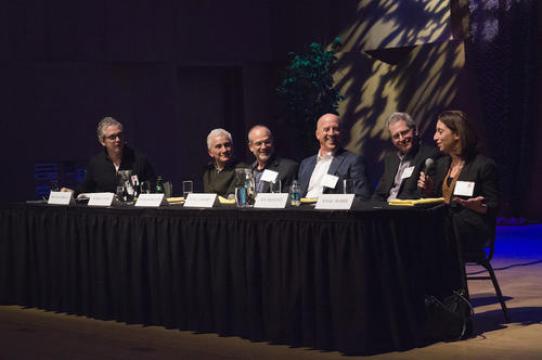 On November  6, 2015, UC Santa Cruz students and the local community were given the unique opportunity to hear renowned professionals in the entertainment industry give their insights and guidance about being part of this very competitive and sought-after field.

Six panelists very generously took time out from their packed schedules to fly up from their offices in Los Angeles, and spoke for over two hours to a full house ranging from local high school and UC Santa Cruz students, to faculty, staff and several community members.

Film and Digital Media students had an opportunity to submit questions to the panel in advance, which prompted a fascinating discussion. Additional questions were asked by the audience at the lively question and answer session during the last half hour of the event. At one point, when a member of the audience asked the panel about re-submitting a screenplay that had been well received but didn’t have any professional representation, Steve Lafferty not only gave his recommendation about what to do, but actually offered to personally look at the screenplay and offer further feedback. There were audible “Wows!” in the audience and spontaneous applause, as everyone rallied around a potential success story in the making. “However, this is the only offer I can make today,” laughed Lafferty.

"As I have reconnected with many of our alumni in the film and television industry over the years, it was clear that they wanted to not only financially support our efforts in the arts, but also find a way to be involved with our students,” noted UC Santa Cruz arts dean David Yager. “At the same time, our students need more exposure to real-life industry experience, so putting together this panel was a way to address both of these needs. It’s truly a win-win, for both our alumni and our students.”

“I am extremely grateful to our panelists who are giving so generously of their time and expertise,” Yager added. “Our students have the opportunity to gain a better understanding of how their studies may lead to a career in the film or television industry. For some of our students this could be life-changing.”

The panel also gave their observations about the difference between various forms of entertainment media and how dramatically such a variety of viewing options and formats are impacting the industry. Other areas covered included the benefits of joining a guild, the importance of making sure that the industry becomes more diverse in their hiring practices in front of and behind the camera, and how to start a career in entertainment.

They also stressed the importance of conveying one’s passion, interest and knowledge of the industry, and how excellent communication skills were essential for not only nabbing that first job, but for exceling in the entertainment industry. Writing an impressive cover letter as well as sending hand-written thank you notes via mail (not e-mail) after an interview, were also sited as key to standing out above the rest.

Other advice about breaking into entertainment, included getting a job as a production assistant, creating one’s own content and putting up on the Internet, and being persistent and assertive about achieving goals. The panelists gave examples of people who had developed their own content and had been discovered by content producers who scour the Internet looking for new ideas and talent.

“The industry can be unfair,” said Moonves. “There’s an element of luck to it. And it can be very frustrating, but you have to have persistence. That’s the nature of it, but enter screenwriting contests, attend labs at film festivals where you can submit your idea for a project…go after what you want.”

At the end of the discussion, many who attended expressed what a great opportunity it was for them to have such close access to so many well respected movers and shakers in the entertainment industry, and to hear such valuable advice. They especially enjoyed being able to approach the gracious panelists after the event with personal “thank you’s” for coming up to the campus and spending the afternoon with them.

David Korduner, who in addition to being an alum, is also a UC Santa Cruz Foundation Trustee, stressed the importance of a well-rounded college education. Those in attendance had the rare opportunity to add to their own college experience and education by learning first-hand from six incredible industry professionals.

Listen to the audio podcast of the Business of Entertainment Panel by clicking here.