Since he began work at UC Santa Cruz in 2001, he's been the AV go-to person 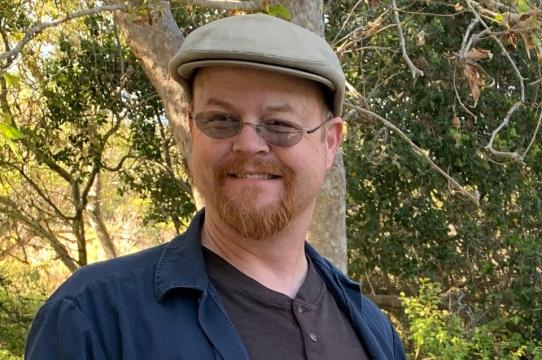 When Eric Mack was in 5th grade, his desire to avoid acting in a school play led him to try out working the lights.

That decision set the stage for the rest of his life and led to his longtime job as technology supervisor for the UC Santa Cruz Theater Arts Center.

“I’ve always been that kid that takes stuff apart and puts it back together,” he said. “I want to know how stuff works. My mom used to buy broken stuff at garage sales simply because she knew I would want to take it apart.”

Since he began work at UC Santa Cruz in 2001, he has been the go-to person to fix or create anything that involves lighting, sound, media, classroom AV systems, database development and custom cable fabrication.

As his former boss used to say, “If it runs on electricity, it’s Mack’s problem.”

Mack also coordinates technology for all of the Theater program’s 6-8 productions each year and is constantly in demand. “I’m involved with every production and event we do in the facility,” he said.

“I’m like a fireman,” he said, explaining that his biggest challenge is time management. “I have daily duties that I need to do to keep the lights on and the place running, but I’m also the guy that everybody goes to if they have an issue in a classroom or theater or studio. I have to drop what I’m doing and go help them.”

He gets to campus early and keeps a running list of things to work on with priority given to preventing hazardous situations.

Working during the COVID-19 pandemic added another layer of challenge. “We did experimental Zoom theater and Zoom performance with mixed results,” he said. “I had to figure  out how to integrate Zoom with other software to make it not look like Zoom.”

As part of his job, Mack is also always trying to keep up with the latest technology, and makes recommendations about what his department should purchase. He does a lot of research in his off time. “Whenever I go in a new facility or somewhere with cool tech, I snoop and see what they have,” he said.

He teaches an upper division course in sound design and engineering but wishes it was lower division so he could train the students and work with them on productions. Most students who take the class are seniors and then leave. He loves working with the students and seeing them learn and move on to success at graduate school and in the professional world.

Mack is proud that students have so many opportunities in the Theater program at UC Santa Cruz. “If you want to go in and apply yourself, you can work as much as you can in our department,” he said.

Raised in Marin County, Mack is the son of two teachers. His father taught PE and biology and his mother taught home economics and child development. “I was a band geek,” he said. “I played saxophone for seven years.”

Without really trying, he got sucked into theater tech  after that first try in 5th grade. When he got to middle school, a choir teacher asked if any of her students knew how to run lights, and Mack’s name came up. Then when he got to high school, all the tech students had graduated and a teacher asked if anyone could run the lights. “I was the only one who raised my hand,” he said.

Always interested in audio-visual technology, he took an internship with a local television station in high school and  thought for a while about pursuing a career in television. He thought he would like working as someone who coordinates changing camera shots or lights.

When it was time to graduate, he attended UC Santa Cruz initially planning to be a film and video major.

After he had trouble getting into required classes for film and video, he switched to theater and ended up earning his bachelor’s degree in theater arts. While most of his fellow lighting students liked being designers, he preferred being the person who takes the designers’ drawings and makes them a reality. He also enjoyed being a sound designer and was able to get a lot of work doing that as an undergraduate and a professional theater practitioner.

Only two years after graduating with his theater degree, Mack returned to UC Santa Cruz to work as a technology supervisor.

When he is not working, he enjoys spending time with his wife and two daughters, ages 1 and 4. “I only wanted one child because I was an only child but now I can’t imagine my life without either one of them,” he said.

He used to restore old cars and still has a 1966 Beetle and 1948 Oldsmobile. He also enjoys writing music- including the piece that plays at the beginning of the arts division podcast. While he doesn’t play saxophone much anymore, he does enjoy playing guitar and banjo.

But don’t ask him to spend time at the beach. “I’m a redhead so beaches and the sun don’t get along with me,” he said.

He likes seeing theater productions outside of UC Santa Cruz because he can enjoy them in “blissful ignorance.” He finds that it can ruin the magic if you’ve already seen behind the curtain and it’s  a different story when he sees a show on campus. “If something goes wrong and I’m in the audience, they come and find me,” he said.

Plus, there’s always a new problem to solve. “I never know how somebody’s going to break something in some interesting way,” he said.