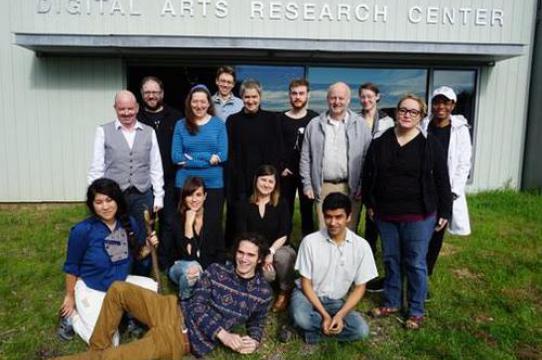 Begun last year as a two-year faculty and post-graduate exchange between the University of Sussex in England and UC Santa Cruz, the Sussex-UCSC Digital Media Exchange has made great strides in enhancing theory and practice in digital media research. Initiated originally by Dr. Kate O’Riordan, who teaches at the University of Sussex, but also held a faculty position at UC Santa Cruz in 2012, the innovative program has brought students and faculty together, forming an invaluable collaboration of ideas.

“Kate was looking at strengthening the relationship that she had between the two universities, and seeing cross-over areas for research and teaching,” said Jennifer Parker, Chair, Art Department, Associate Professor, Digital Arts & New Media MFA Program/Executive Director, UCSC OpenLab, and who also runs the exchange program with Kate O’Riordan. “She was able to get funding from her institution that allowed for the exchange.”

The first exchange last year included four graduate students and a couple of faculty members from the University of Sussex who took a look at UC Santa Cruz’s programs, curriculum and research agendas. The group showed their work to UC Santa Cruz students and faculty via various research profiles, and also visited the city of Santa Cruz to get an overall picture of the area and what was available. The following March, the same amount of graduate students and faculty from UC Santa Cruz, including Jennifer Parker, made their way to Sussex to replicate what the University of Sussex group had done at UC Santa Cruz, resulting in a valuable discovery of how the two universities could collaborate successfully and complement each other’s programming

When it came time for the next round of exchanges during January 2016, four top UC Santa Cruz graduate students were selected by Arts Division faculty to be part of the program. The groups researched through the Art Division’s OpenLab Network, which facilitates innovative, interdisciplinary and collaborative research with science, art, community, design, and engineering.

“We were looking at different sensory modalities of thinking about the environment and the person in the environment,” explained Parker. “We did a bio sensing hackathon for a day and a half and really exciting ideas came from that.”

Tim Jordan, the Head of School from the University of Sussex, who was thrilled with this year’s program, has been thinking about the outstanding possibilities that could come from future exchanges. He noted that there were many similarities in how both universities approach research, but also differences that would enhance each institution’s methods.

“The intellectual energy generated in analyzing digital media was memorable,” said Jordan. “Not only in the sessions discussing research or workshops, but the throwing of ideas around was excellent. I hope several research projects will come from these discussions.”

Lecturer in Metal Fabrication Digital Art Sculpture Kyle McKinley, really enjoyed being able to lead a campus tour for the group. He used the tour as a chance to investigate the counter-culture history of UC Santa Cruz and to participate in discussions about various interventions that UCSC students and faculty have made into academic life, scholarship, and life outside of academics over the last 50 years.

Kat Braybrooke, one of the Sussex students on McKinley’s campus tour, found a like-mindedness between the two universities. “I’m hoping we can give the UCSC folk as good as historical psycho/cultural geography tour like the one we got (thanks to Kyle for leading it!), where we were able to learn some of the lesser-known histories of the campus,” she said. She also especially enjoyed meeting Associate Professor, Film and Digital Media, Rick Prelinger and spending time at his library and archives in San Francisco, as well as finding out about the work of Digital Humanities Specialist Rachel Deblinger.

“People really enjoyed each other’s company…really found some amazing connections,” said Parker. “Graduate students on both sides, one from UCSC and one from Sussex, have gotten hired before they even graduated, and I think it was because they had this international connection brewing already.”

Sussex student Mary Agnes Krell found the UC Santa Cruz campus, along with the faculty and students to be inspiring. “I am looking forward to continuing to build on the discussions that have emerged from the exchange,” said Krell. “I would like to see continued student movement between our two universities and new collaborations between the faculty.”

UC Santa Cruz student Scott Tooby’s highlight of participating in this year’s exchange was the bio-sensing workshop. “It’s  exciting to see how the rate of knowledge exchange about topics like programming and electronics is accelerated dramatically when you have a group of people with varying technical backgrounds and experiences together in one room,” he said. When in travels to the University of Sussex soon, he’s looking forward being immersed in the university’s culture and learning more about their research institution.

Looking to the future, the exchange also hopes to include undergraduate students in the program. “For undergrads, we want to make it seamless where they could do a year over there and those courses would count at UCSC, and vise versa,” said Parker. “It’s a really wonderful possibility, so we’re talking about how we can build on it and do graduate as well as undergraduate level.”

As the UC Santa Cruz group gets ready to go to the University of Sussex during March, they’re looking forward to reconnecting. They will be doing the hackathon there, as well, and going over ideas together virtually before they meet. There’s also interest in expanding the exchange program, including possible partnerships with a university in Australia and Hong Kong, making for a unique educational stream between these areas and Santa Cruz and Great Britain.

“If we can we keep a cohort together for this international connection, it would be great for undergrads and change their perspective globally,” said Parker.