Taking in a Dip in the Sound Pool

Art Students Present Concert of Mixed Sounds in and Above Water 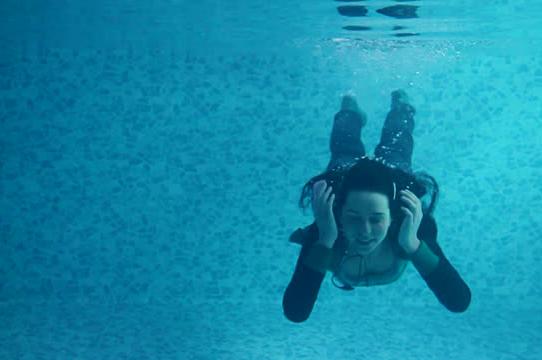 The White Stripes have appeared in a Saskatoon bowling alley, the Grateful Dead rocked out at the Giza pyramids, and Rage Against the Machine caused a bit of a stir when they played in front of the New York Stock Exchange, but what about a concert that’s performed underwater to an underwater audience?

That’s exactly what some very creative student artists are presenting on Tuesday, June 7, 2-4 p.m., in the outdoor swimming pool on the UC Santa Cruz campus.

Pool performances date to the 1970s

Although not performed often, pool performances entered the scene in the 1970s when artist Max Neuhaus’ famous Water Whistle series had audience members lying on their backs, ears submerged in a warm pool, as he constructed acoustic instruments to play in the water.

Anna Friz was initially intrigued with the idea when she was a teenager and participated in synchronized swimming. “Synchronized swimming relies on underwater speakers as well,” she says. “I just started here at UCSC this fall, and when I saw that the Film and Digital Media department had both a hydrophone (a specialized microphone that records underwater sounds) and an underwater speaker, the concert seemed like a fun end-of-year project to engage in. Also, the students doing sound production in the department and in DANM have been working with hydrophones quite a bit given our proximity to the ocean, and it seems most fitting to listen to their pieces underwater as well.”

The pieces that will be performed include “tape pieces” which will be played back into the pool system. Two of the pieces involve live mixing, with both using electronics to create and/or manipulate sounds, and will be heard poolside.

“Our intentions with presenting audio pieces in the pool stem from nurturing curiosity about sound, especially as sound behaves a little differently in water than in air (sound travels faster underwater),” says Friz. “Listening in the pool is also a different and quite stimulating physical sensation as opposed to sitting in a chair at a concert--audiences are free to move, to drift and float, or to dive down. The context of a pool offers both immersion and a threshold, and this interplay between depth and surface is interesting artistically.”

One of the student artists, Ryan Page, has composed a live electro-acoustic system of feedback between hydrophones, contact microphones, standard dynamic microphones, binaural microphones, as well as under and above water speakers. “This has been a great opportunity to expand on some of the smaller scale projects I have created using water as a form of mediation,” he says. “I would like to thank Professor Friz and the staff at the pool for allowing us this opportunity!”

Another participating student artist, Isabelle Carbonell, has a piece in the program entitled Tomo/veillance. “In essence, [it] crafts a sonic evolution from underwater surveillance to modern day science around climate change and the anthropocene. I weave in traditional interviews with tomography scientists, historical research, theory, archival LPs found in the Navy archives, and my own first-person narration, combined into a piece of critical practice,” says Carbonell.

In all, there will be two hours of listening time and the audience can come and go as they please and, enter and re-enter the pool, throughout. The line-up for the concert will be presented by each composer. “The pieces vary from explorations which are explicitly about ship's horns or tomographic surveillance, to phenomenological experiments that play with the feedback between above and below water speakers,” explained Friz.

“I have participated in other pool-related sound events and find the sonic experience of a concert in water to be very interesting, as one's body is in a relaxed but active state of motion while listening,” she added.

Audience members who want to hear the sounds underwater will be in the pool (and should wear swim suits) and can also listen above the water to other sounds above-ground soundscapes, making for a rare and fascinating listening experience involving both air and water, not to be missed!