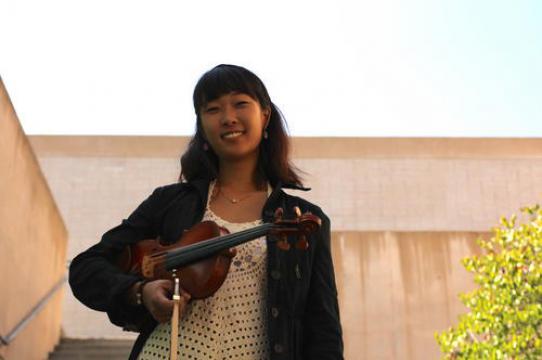 It’s been quite a journey for Terre Lee, now in her final quarter at UC Santa Cruz, as she contemplates graduating in June and thinking about what lies ahead in her future. After being on campus for five years, she’s looking forward to continuing the amazing work she started here and expanding on her passion for music and teaching.

While studying at UC Santa Cruz as a double major in Music and Economics, she’s lead a team that was nominated for the $1 million Hult Prize for creating an early education music program for underserved communities; done extensive research on how artists can create successful marketing efforts; taught violin every week to lower income children; and had internships at various local organizations including the Arts Council and Kuumbwa Jazz Center in Santa Cruz.

“I was originally drawn to UC Santa Cruz because I wanted to study environmental science,” she says. “Based on what my friends had told me, UC Santa Cruz sounded like a beautiful place.” Growing up in Pasadena, Terre had also been expected to attend UCLA, as the rest of her family had done, but was eager to leave the congestion of Los Angeles for more peaceful surroundings.

After pursuing a rigorous course in environmental science during her freshman and sophomore years, her lifelong passion for music lead her to rethink what she wanted to focus on for her major, and her life. “I had some internships with environmental organizations, but I wasn’t feeling passionate about it and was feeling lost,” she says. “Then I took a music class in my junior year here and realized that I could do what I want through music. When I did music, it felt right.”

Since Terre had her first violin lesson at age five (and has been playing ever since) and was taught piano at an even earlier age, music is definitely in her DNA. “My mom played the piano in college so we always had a baby grand in the house,” she says. “And when I told her that I wanted to play the violin, she jumped on that.” Inspired at that young age by seeing a clip from the film The Red Violin, she liked the sound of the instrument and knew then that was the one for her.

As she focused more on the violin and less on the piano, her parents enrolled her in the prestigious Colburn School’s Conservatory of Music in Los Angeles to continue with her music studies while also attending a very academically focused all-girls liberal arts high school near her home. “I had a really fantastic education,” she says of her time there. On top of that, Terre participated in water polo for four years, cross-country for two, and, since she had taken gymnastics since she was a toddler through age 13, also coached gymnastics.

Once she decided to switch majors in her junior year, she started taking more music classes that surprisingly lead her to also choosing to pursue economics. “I originally didn’t think that I would stick with economics,” she says. “But I ended up taking an economics class with Professor David Kaun and totally fell in love with it. It was Labor Wars and Theory and Film, and it was a film class and discussion limited to 20 students. We discussed labor unions and various economic paradigms and it was a very well rounded scope of how to look at society. Professor Kaun is an economist who doesn’t really use numbers too much…it’s more like philosophy. Plus, he’s also a musician. He started as a music major and switched to economics, so that was a great connection for me.” Terre was also a Teacher’s Assistant in Kaun’s Economics and Performing Arts class, which she really enjoyed.

“The real reward in college teaching is the opportunity to work with bright, interesting and creative young men and women,” says Professor Kaun. “In over 50 years of such pleasure, Terre Lee is a classic example. I met her as a student, have worked with her as a TA and in a number of ventures dealing with disadvantaged young people in our community. As a fine violinist, excellent student in both the arts and economics, and as a most thoughtful and creative person, Terre epitomizes the very best in the youth of our society.”

Being recently chosen as a finalist for the distinguished Hult Prize – one of 250 selected from more than 20,000 applicants from all over the world – was quite an honor and one that was well deserved. Based on her experience teaching violin three hours a week at the Gault Elementary School in Santa Cruz using the El Sistema method, she and her team (fellow students Kymberley Kudravy and Justin Kohlberg) are developing a similar, more expanded program for young children called El Sistema First Steps (formerly called Hands On).

“I’ve been teaching at Gault Elementary School for over a year,” says Terre. “At first I didn’t want to do it because I thought I had too much on my plate, but then I re-evaluated my personal values and realized what I wanted to get out of music, which is to help other people and empower them. And that’s exactly what El Sistema does – it’s a music and social program.”

Terre teaches violin to eight, third grade students three times a week for one hour at a time. The program itself takes place every day afterschool and is a big hit with the children and parents alike. “It’s so great for kids and they love it,” says Terre. “Part of the guidelines for El Sistema is that it’s for low-income families who can’t afford music training and the classes also have to have performances in the community.” It’s this progressive model of education that has inspired Terre and her team to create their own El Sistema First Step program and she is looking forward to developing a full curriculum that will be aimed towards much younger children who are in daycare and community centers. It will include guidelines not only for teaching music, but also for related activities, such as games, movement, and how to introduce simple musical instruments into the mix. Terre is now looking for funding and already was awarded a grant last spring.

Tying in with her interest in education, Terre also has been delving into her economist side by examining how artists and art centers can be more effective in marketing themselves and increasing their audiences. “Art is so unique from other industries,” she observes. “It doesn’t appeal to everyone and it’s so subjective, so you can’t package and sell it as you would any other product.” During her senior year, she conducted research that explored how to entice more people to attend performances. She found that the earlier people are educated in the arts, the more they tend to continue to be interested in the arts as they grow into adults, and thus become loyal audience members, confirming what art educators have been advocating for a long time. Over the years, as public schools have drastically cut their arts programs, this has had a profound effect on the arts in general and threatened the survival of several arts organizations and programs throughout the country. “I was interested in marketing approaches and education,” says Terre. “No matter how hard you market this product/performance, it’s going to appeal to people who actually know what it is and what experience to expect.”

She also emphasizes how important it is for students/artists to be very involved and active in marketing themselves and their art. “The people who are doing concerts should be excited to promote them, and they need to show that. There are marketing skills they have to have and a lot of artists don’t know that aspect of it. I’ve heard from other people who think it’s inhumane for musicians not to take a music business class!”

With that in mind, Terre and others in the Music Department have initiated professional development workshops, lead by faculty members, covering topics from how to promote yourself as an artist and how to open a teaching studio, to what it’s like to become a professional conductor and composer.

As June quickly approaches, Terre is excited to add yet another skill to her long list of outstanding talents: becoming a certified yoga teacher. She’s already lined up a position this summer in her hometown teaching yoga in the dance studio where she used to take gymnastics. “I contacted my former coach and asked him if he wanted to offer a yoga class for the parents who bring their kids to the gymnastics classes, and he thought it was a great idea.”

After that, Terre will start on a new path, beyond academia, returning to Santa Cruz and the Bay Area to bring El Sistema First Steps to fruition. Her goal has always been discover new possibilities and help others. “I want people to care about something that is bigger than themselves.” Terre is certainly an excellent example of how that can happen.