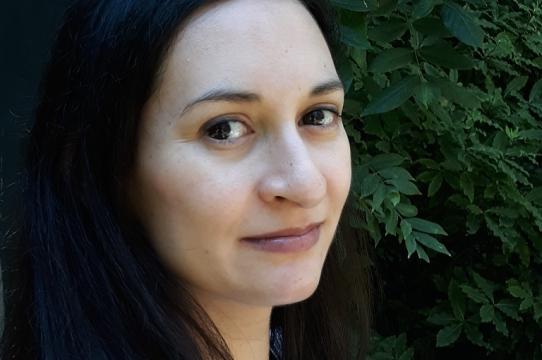 Born and raised in Los Angeles, California as a member of the Tongva tribe, Yve Chavez grew up on the land of her ancestors and has successfully merged her love of art and art history with her profound knowledge of her native culture.

As she prepares to start a new chapter of her life as an assistant professor in the History of Art and Visual Culture Department (HAVC) at UC Santa Cruz, she’s looking forward to teaching undergraduate and upper division courses in curating, California Indian art, and the missions at the borderlands (California, Arizona, New Mexico, Texas, and Florida).

The focus of her research has been centered on the Chumash and Tongva artistic legacies found at four Southern California missions. She wants to ensure that the people who belonged to these tribes during the mission era are not left out of California mission art studies’ narratives.

“The Franciscans and the Spanish soldiers would take native people and essentially force them to be the laborers at the missions,” Chavez explains. “In the process the native people also brought knowledge of local materials and how everything would be impacted. Part of my discussion regarding the mission architecture is that in the process of creating a structure, the indigenous people would bring ideologies that were routed in a native place and part of the environment.”

Chavez points to examples of mural paintings in California missions that were painted by native people using native designs and local pigments. “Today, in the remaining churches many of these types of paintings were painted over due to crumbling walls that needed to be restored. It’s a complex topic so I’m trying to bring a native perspective.”

After earning her undergraduate degree at Stanford University in the Department of Art and Art History, Chavez then focused on Native American art at the University of Washington where she earned a master’s degree. She also had key internships at the Getty Villa in Pacific Palisades, Calif, and the Smithsonian’s National Museum of the American Indian in Washington, D.C.

From there she returned to her hometown area of Los Angeles to do her PhD in art history. In 2017, she, along with one other Native American female student, were the very first of Tongva descent to be awarded PhDs at UCLA, which actually sits on what was originally Tongva land. Following her graduation, Chavez was the first recipient of the Andrew W. Mellon Fellowship at the Wheelwright Museum of the American Indian in Santa Fe, New Mexico, where she curated an exhibition on contemporary Native American art. “Being at the museum gave me good experience but I missed California, so I decided to apply for the UC President’s Postdoctoral fellowship and fortunately I received it. The host campus was UC Santa Cruz and my mentor was Amy Lonetree.” 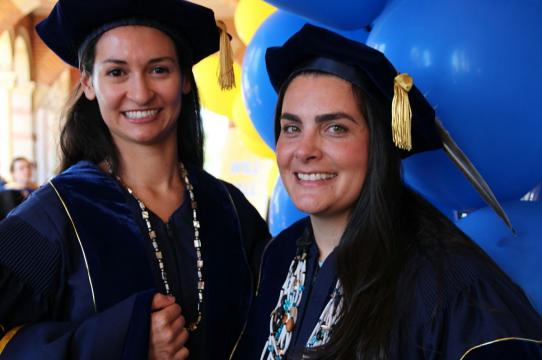 “We are thrilled that Yve is joining the faculty in HAVC and will be part of the larger Native American studies community at UCSC,” said Lonetree, an associate professor of history at UC Santa Cruz who is an enrolled citizen of the Ho-Chunk Nation of Wisconsin. “She is pursuing important and innovative scholarship on Indigenous art in California missions and we look forward to her future contributions. It is exciting to have another scholar whose research focuses on the Indigenous peoples of California on our campus.”

Chavez’s work delves into not only the art but the history of her people and how they intersected during the mission era. “Originally, we called the LA basin our home including parts of northern Orange County, LA County, and the southern Channel Islands, and we shared a border with the Chumash at the Malibu mountains,” she explains. “During the mission period when the Franciscans arrived, our people spoke the same language and identified according to their village. Having one over-arching tribal name was a concept that came much later with the United States Federal Government.”

As their labor force started dying off, the Franciscans trekked further inland to find more native people to work. “The labor force was dying…people were getting sick and killed, so the Franciscans brought in additional native people from other culture groups that were farther inland,” says Chavez. “Consequently, it wasn’t only Tongva and Chumash people at the Mission San Gabriel, where my family was from.”

Even though the Spanish had pledged to return the land to the native people, that promise was ignored once Mexico gained independence from Spain and took over California. In 1850, when California became a state, it was incredibly challenging for the tribes to reclaim what rightfully belonged to them. “There wasn’t a strong paper trail to associate land titles with the tribes or individuals or families,” says Chavez. “It’s still very complicated for our communities to gain Federal recognition.”

Chavez is determined to change the narrative regarding how Native American history is taught. “People have attended public school and learned a certain history about the missions, and generally that history does not account for the fact that native people had a pretty rough time of it at the missions….As a scholar, I’m trying to do what I can. Native people were doing a lot of important work in the missions and what is seen in terms of the architecture and the art could very well be the product of native hands….California architecture is very unique and not a carbon copy of what you see in Spain. I’m trying to break down that whole Spanish fantasy heritage that infiltrated the study of mission art.”

As Chavez gets ready for the fall term, she is grateful to be a part of HAVC and its outstanding faculty. She’s also working on a book which focuses on indigenous artists who worked at the California missions, particularly in Southern California.

“My course on California Indian art will focus on the entire state and not just my own tribe,” she says, “considering examples from the past to the present. I feel good knowing I can do this research and share it with the students who may not otherwise learn this important history.”