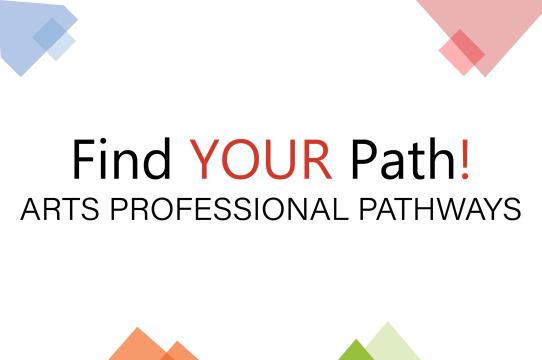 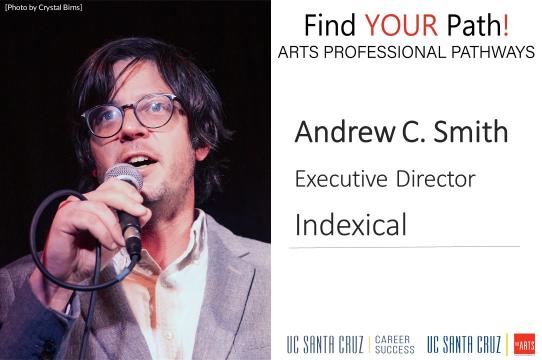 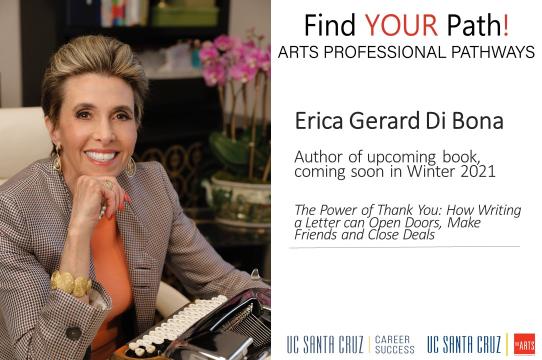 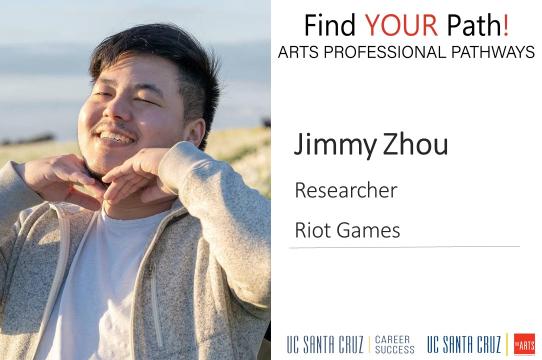 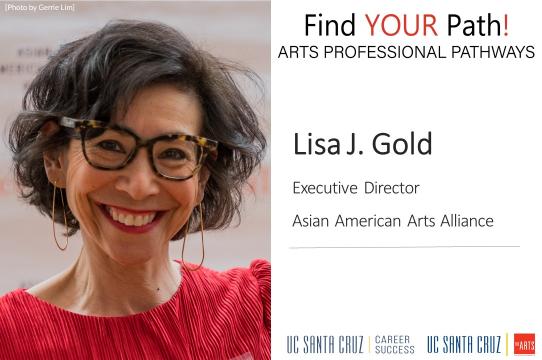 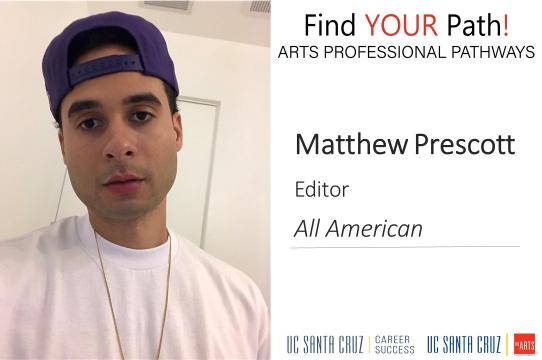 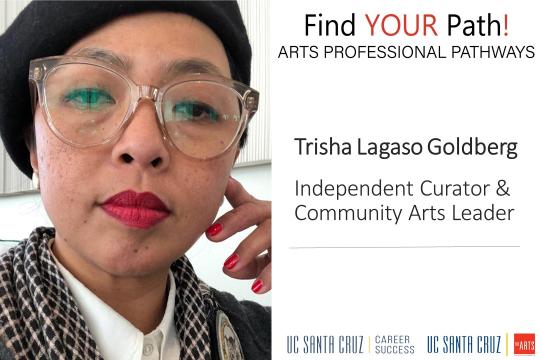 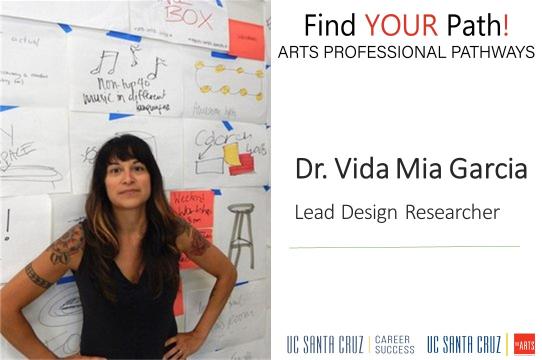 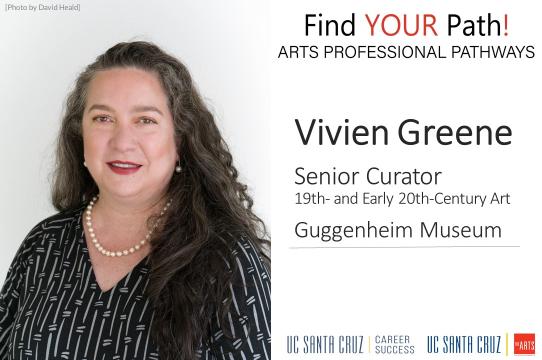 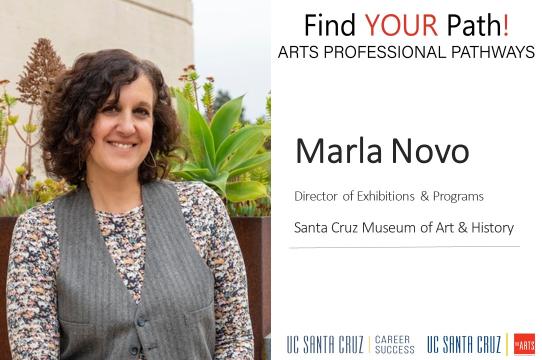 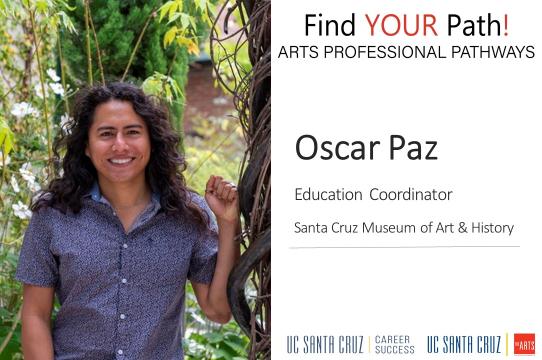 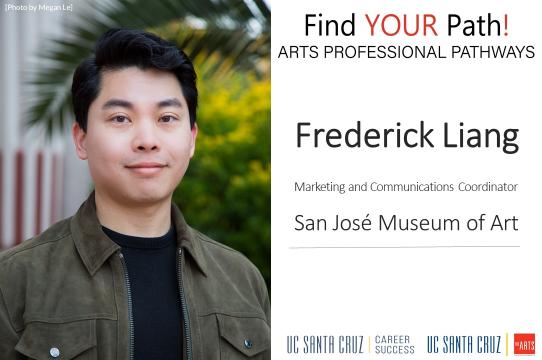 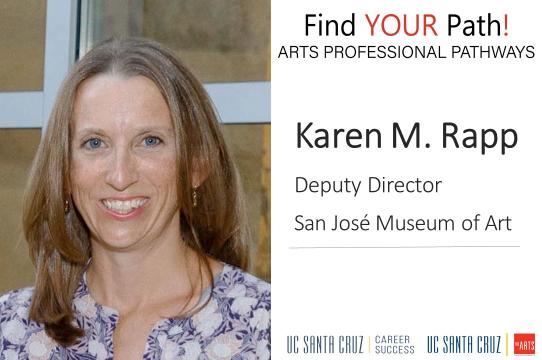 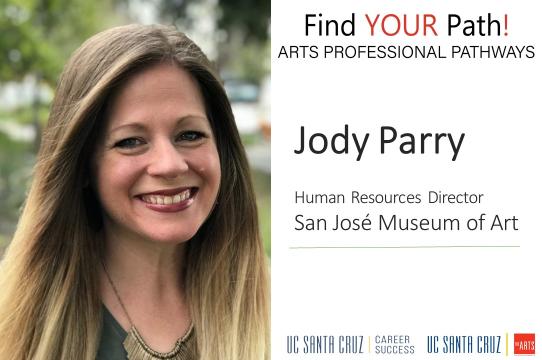 Arts Professional Pathways: Find YOUR Path! connects Arts students with employers, alumni, and creative practitioners in the local and national creative, entertainment, non-profit, and technology industries. A successful artistic or creative career is not based on talent alone, it is also about the connections you make. Find YOUR Path! puts this into action: developing an artist’s network can lead to new opportunities, and individuals often launch their careers by making connections in the industry.

Get to Know Our Featured Speaker

Indexical is led by Executive Director Andrew C. Smith, a curator, and composer holding a D.M.A. in Music Composition from UC Santa Cruz. Smith is the primary curator of Indexical’s performance programming and leads institutional development. Prior to Indexical, Smith worked as the Managing Director of the S.E.M. Ensemble throughout the John Cage Centennial at Carnegie Hall, Lincoln Center, and Paula Cooper Gallery, as well as in marketing and fundraising at Issue Project Room and the Seattle Symphony.

ERICA GERARD DI BONA is a believer in the power of “Thank You” notes. She’s written a book that’s yet unpublished called The Power of Thank You: How Writing a Letter Can Open Doors, Make Friends, and Close Deals.

Jimmy Zhou graduated from UCSC with a masters in 2017b. He's worked in the industry for 3 years now, working at NetEase Games, Epic Games, and Riot Games. Right now, he acts as the only researcher for the gameplay side of League of Legends. His time at those companies have given him the opportunity to work with multiple genres and platforms, the biggest titles being Fortnite and League of Legends. Recently his work has taken him to focus a lot more on R&D and game adjacent projects. He's active in the industry's games user research community as well, acting as one of the steering committee and helping plan various conferences and summits.

Lisa Gold is the Executive Director of the Asian American Arts Alliance (A4), a nonprofit organization dedicated to ensuring equitable representation of Asian Americans and Pacific Islanders in the arts. Lisa has over two decades of experience in arts management, development, programming, community outreach, and public relations. She has served as the director of public engagement at the Hirshhorn Museum and Sculpture Garden in Washington, DC; the executive director of Washington Project for the Arts, where she doubled the budget, rejuvenated programming, and secured a long-term lease for the organization. She also served as the public relations director at the Drawing Center in New York, organizing several events to coordinate participation among nonprofits in the community; and director of development and communications at Socrates Sculpture Park in Long Island City. She has served on the Board of Directors, the advisory committee for the Diversity Mentorship program, and as chair of the New Leadership Alliance of ArtTable, a national organization dedicated to advancing the leadership of women in the visual arts; the board of advisors for Wayfarers, an artist-run studio space in Brooklyn, NY; the advisory committee of HueArts NYC, an organization that showcases arts entities created by and grounded in the experience and aesthetics of all People of Color; among other roles. Lisa is recognized as a strong advocate for creative producers and has developed inclusive programming and outreach initiatives throughout her career.

Trisha Lagaso Goldberg is an artist, curator, and the Director of Curatorial Affairs for FOR-SITE Foundation. Born and raised on the Hawaiian island of O‘ahu, Lagaso Goldberg spent 15 years in the Bay Area (1991-2005). As executive director of Southern Exposure, the acclaimed Mission District artist-centered organization and gallery, she stewarded over one hundred exhibitions and events and worked with thousands of artists from around the world. In 2005, Lagaso Goldberg returned to Hawai‘i where she led the Hawai‘i State Foundation on Culture and the Arts’ commissioned works branch of its public art program. As the founding gallery director and curator of the Chinatown art space thirtyninehotel, Lagaso Goldberg launched an artist residency program that invited artists from outside of the archipelago to create site-specific installations. Through this initiative, she commissioned works by such artists as Carolyn Castaño, Eamon Ore-Giron, Julio Morales, and Stephanie Syjuco. Her curatorial projects include Sino Ka? Ano Ka? San Francisco Babaylan, which she co-curated with Carlos Villa for the Museo ng Maynila (1998). She is currently co-curator of the Carlos Villa: Worlds in Collision exhibition which will premiere at the Newark Museum of Art in February 2022 and at the Asian Art Museum in June 2022. Lagaso Goldberg currently lives and works in San Francisco.

Vida Mia García received her doctorate from Stanford’s Program in Modern Thought and Literature, an interdisciplinary department where her research combined the fields of literary studies and anthropology.  She has taught in Stanford’s English, Anthropology, and Feminist Studies departments as well as in the Ethnic Studies department at California State University, East Bay.  Since leaving traditional tenure track academia, Vida Mia has loved being able to continue researching story and culture – as well as to utilize her ethnographic training – in the world of design thinking and innovation strategy.  She has worked with client teams across the retail, beverage, consumer packaged goods, and social media industries throughout the U.S. and internationally; more recently, she has circled back to the realm of higher education to help colleges and universities develop and launch design/creativity/innovation labs on their campuses.  She also very happily continues to teach: in addition to coaching in the Executive Education program at Stanford’s Hasso Plattner Institute of Design (the d.school) and lecturing in the Department of Design at the University of California, Davis, she spent two years as a Visiting Professor of Practice in the Faculty of Engineering and Architecture at the American University of Beirut. Currently, she is building and leading a research group inside the Experience Strategy team at Capital One.

Vivien Greene is Senior Curator, 19th- and Early 20th-Century Art, at the Guggenheim Museum in New York, and Curator at Large, Peggy Guggenheim Collection, Venice. She specializes in late 19th- and early 20th-century European art with concentrations in French and Italian modernism and turn-of-the-century aesthetic currents. Her recent exhibitions and catalogues include Mystical Symbolism: The Salon de la Rose+Croix in Paris, 1892-1897, and Italian Futurism, 1909–1944: Reconstructing the Universe, which was named best exhibition in 2014 by the Association for Art Museum Curators. She is a frequent participant in scholarly symposia and has authored multiple texts for peer-reviewed publications. Among her fellowships and honors, she has been awarded a Fulbright to Italy and a Rome Prize from the American Academy in Rome. In 2017 she was made an Ufficiale dell’Ordine della Stella d’Italia. She holds a Ph.D. in art history from The Graduate Center, CUNY and a B.A. in Comparative Literature in Italian and French from U.C. Santa Cruz.

Marla Novo (she/her) earned a Master of Arts in Art History from San Jose State University and a Bachelor of Arts in Art History from UC Santa Cruz. She has over 25 years of experience curating exhibitions at non-profit institutions as well as at unconventional spaces. She’s activated exhibitions with collaborative programming. Marla is especially interested in using art, history, and culture to create unexpected spaces for storytelling.

Oscar Paz (he/him) was born and raised in Guatemala before moving to California. He majored in French and Spanish at UC Santa Barbara. He brings his passion for teaching to the MAH by developing educational programs, activating the exhibitions through guided tours, and facilitating art activities. He is committed to uplifting stories of the past and connecting them to people visiting the MAH.

Karen Rapp, (She/Her), Deputy Director. Karen oversees education and community outreach at SJMA and works closely with the Executive Director on key initiatives including college and university outreach, equity and inclusion, and strategic planning. Karen started at SJMA as grants officer in 2013 and held positions of increasing responsibility as Director of Grants and Special Project Funding and later as Assistant Director, Strategic Initiatives. Prior to working at SJMA, she taught Modern and Contemporary Art History at numerous Bay Area universities and held curatorial positions at SFMOMA and Rice University Art Gallery. She holds a PhD in Art History from Stanford University and a BA in American Studies from Northwestern University.

Frederick Liang (he/him) is the Marketing and Communications Coordinator at the San José Museum of Art (SJMA), where he oversees digital marketing and communications efforts and supports the Museum's community engagement initiatives. He started his career at SJMA in 2014 as a Museum Experience Representative and moved to the Marketing and Communications department in 2017. Before joining SJMA full time, Frederick enjoyed volunteering at local arts and cultural organizations such as the Japanese American Museum of San Jose and Chopsticks Alley Art. He is also the current co-chair of Santa Clara County's emerging arts professionals network genARTS Silicon Valley, a program of SVCreates. He holds a BA in Art from UC Santa Cruz, with a minor in the History of Art and Visual Culture.
Jody Parry, (she/her), Human Resources Director. Jody has over 15 years of human resources experience and has been with the San José Museum of Art (SJMA) since May 2018. Jody is a strategic HR leader helping connect human resource principles with the business. Besides creating functional solutions and coaching staff, managers, and leaders, Jody also helps to cultivate culture and employee experience. Jody has served as a member of the Equity Task Force over the past 3 years, started developing an internship program, and has partnered with colleges and universities to find ways to connect students with the Museum.