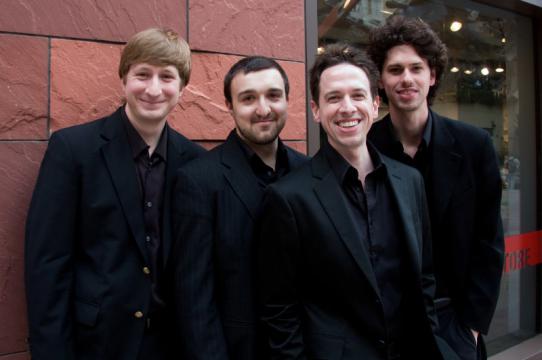 Embarking on their third concert season, the Los Angeles Percussion Quartet has fast become one of the premier percussion chamber ensembles on the West Coast.

In presenting their unique repertoire of mostly commissioned music, the LAPQ blends the best of both the visceral and sensual elements of percussion, such that a performance could place the audience in the center of a primal drumming ceremony, or immerse them in a static field of microtonal metal ambience.

Recent performances include Monday Evening Concerts, Music & Conversations, Chapman Percussion Symposium, the Pasadena Art Center of Design, and as ensemble-in-residence at the 2nd Los Angeles Composer’s Project, the University of Southern California, Chapman University, and the California Institute of the Arts.

2011 will see the group’s release of numerous audio recordings (featuring the music of Eric Guinivan, Steve Forman, and David Johnson), world premieres of three LAPQ commissions, and a tour of Northern California.