American Night: The Ballad of Juan José peels back the complicated layers of U.S. history with ingenuity and humor 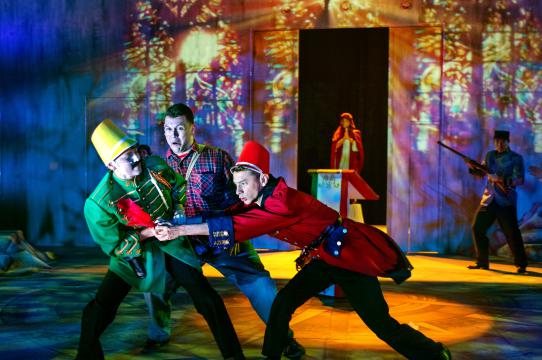 Most of us never learned about Viola Pettus in our history classes. An African-American woman who was a trained nurse, she courageously stepped up during the deadly 1918 Spanish flu pandemic that swept the United States and nursed anyone who needed help along the Texas border, including Mexicans who had crossed the border illegally, Pancho Villa’s renegade soldiers, and even Ku Klux Klan members.

But once Texas authorities discovered that Pettus was treating illegal immigrants, they were determined to stop her, forcing her to go into hiding. Her story and those of many sung and unsung heroes throughout American history are the crux of American Night: The Ballad of Juan José, an innovative play by Richard Montoya, performed by UC Santa Cruz Theater Arts students, and directed by UC Santa Cruz Theater Arts lecturer Kinan Valdez.

The provocative story centers around Juan José, a former Mexican police officer and now immigrant who’s had to leave his family and escape the drug wars. He’s frantically trying to pass his U.S. citizenship exam and falls into a fantastical dream that takes him on a wild journey through history that is hilarious as well as somber and thought-provoking.

While the play takes a hard look at immigration and race, it also melds current pop culture references into the historical mix, adding to the overall entertainment. From Teddy Roosevelt referring to texting to scenes of the Japanese-American internment camps during World War II, American Night is a history lesson not to be missed.

"I'm very proud of our Theater Department for presenting a play that pushes boundaries and delves into difficult issues about race, discrimination, immigration, and our culture," said Ted Warburton, interim dean of the arts at UC Santa Cruz. "Our students have done an incredible job of bringing American Night: The Ballad of Juan José to life under the direction of Kinan Valdez, who not only teaches here but is the producing artistic director at the renowned El Teatro Campesino."

American Night: The Ballad of Juan José, which premiered at the Oregon Shakespeare Festival in 2010, also has intriguing connections to Zoot Suit, the 1978 hit play by Luis Valdez that centered around the story of the 1942 Sleepy Lagoon murder which lead to innocent Mexican-American men being wrongly accused and imprisoned. Not only does American Night deal with similar issues that are addressed in Zoot Suit, but the director, Kinan Valdez, is the son of Luis Valdez, and Richard Montoya is the son of poet and activist Jose Montoya.

Both Jose Montoya and Luis Valdez were very active supporters of Cesar Chavez and the United Farm Workers Movement during the 1960s, and Richard Montoya worked with Luis Valdez’s famed theater group El Teatro Campesino, which began in 1965 as a cultural wing of the United Farm Workers union and is now based in San Juan Bautista, Calif. The theater group was also associated with UC Santa Cruz in the early 1970s when Luis  taught Chicano theater classes on campus. 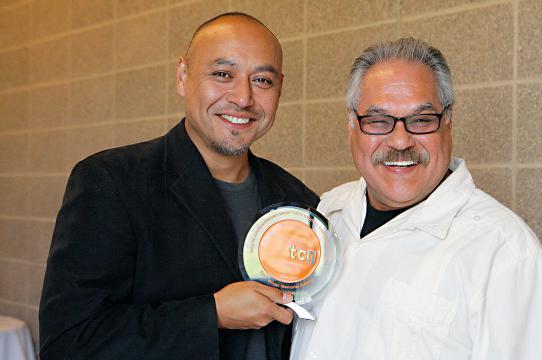 In 2017, a revival of Zoot Suit was performed by the UC Santa Cruz Theater Department, also with Kinan Valdez directing, and with his father in attendance, to celebrate the play’s 40th anniversary. UC Santa Cruz was the first academic theater to produce the revised script.

Like Zoot Suit, American Night: The Ballad of Juan José is still very relevant today, giving new audiences a fresh perspective on issues around immigration and cultural identity that have plagued our society for generations.

American Night: The Ballad of Juan José, directed by Kinan Valdez, is presented by the UC Santa Cruz Theater Arts Department and the Arts Division with special arrangement with Samuel French, Inc. Performances will run from May 24 to June 2, 2019 at the Mainstage on the U.C. Santa Cruz campus. Tickets are on sale now.