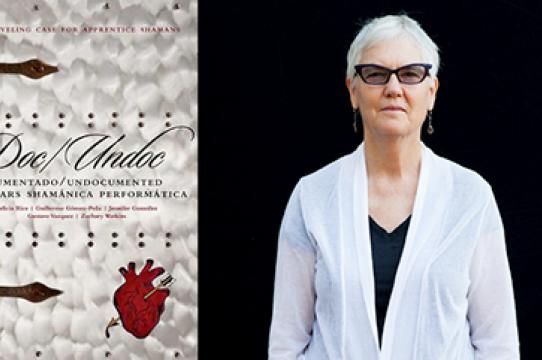 On October 20, The Getty Research Institute will present the world premiere screening of Visionaries, the newest episode from PBS's award-winning documentary series, Craft in America.

It will air on PBS later this year, beginning on December 18.

The night before the screening, Rice will also be featured in conversation with PBS producer Carol Sauvion at the Craft in America Center in Los Angeles. They will discuss the UCSC alumna’s 40-year career as an artist and collaborator.

Her work is currently featured in Artists and Their Books / Books and Their Artists, an exhibition now running at the Getty Research Institute through October 28.

Rice came to UC Santa Cruz in 1974 to learn the craft of letterpress printing and the art of bookmaking.

“I began the work that has shaped my life at UC Santa Cruz,” Rice noted. “I studied the history of the book and worked closely with pivotal figures of the West Coast book art world--Jack Stauffacher and William Everson.”

In 1977, while still a student, she also founded Moving Parts Press in a garage downtown and began her career as a printer, teacher, literary/fine arts publisher, and book artist. Work from Moving Parts Press has been included in exhibitions and collections both nationally and internationally--from book shows in New York and Frankfurt to the Victoria & Albert Museum.

Moving Parts Press has also received numerous awards and grants from organizations that include the National Endowment for the Arts and the French Ministry of Culture.

As the Craft in America Center notes, “Felicia has one foot firmly planted in the 19th century and the other in the 21st. A student of the history of the book and typography, she also utilizes digital technology to produce letterpress artists’ books of radical art. She has been collaborating with Chicanx visual and performing artists, writers, and philosophers for over 25 years.”